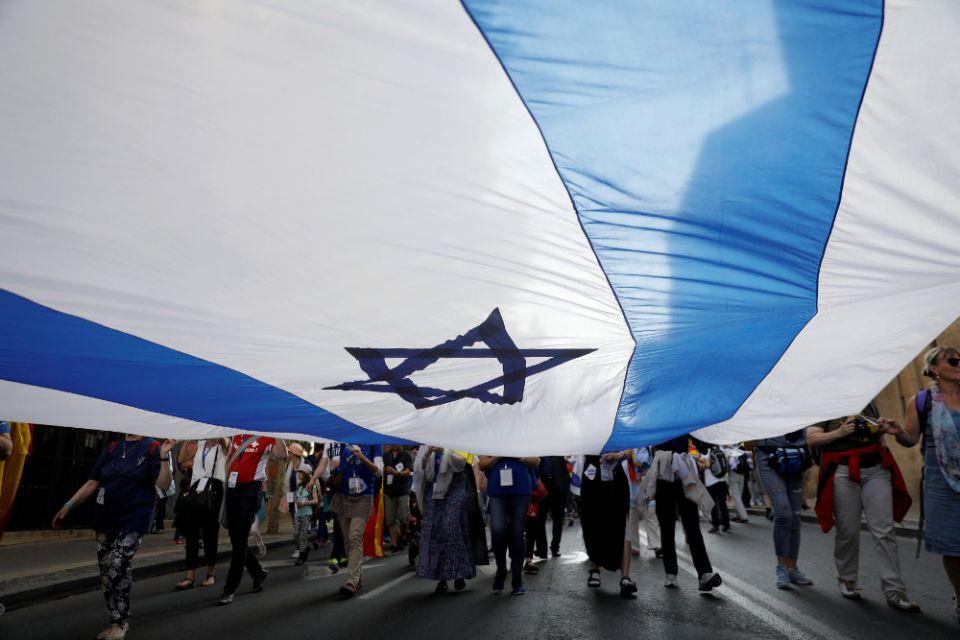 People in Jerusalem take part in the "March of the Nations" March 15 in which Christians from around the world demonstrate against anti-Semitism. (CNS/Ronen Zvulun, Reuters)

Washington — One cardinal and two bishops are among the more than 1,200 U.S. clergy and lay religious leaders urging new Secretary of State Mike Pompeo to appoint a new envoy to combat anti-Semitism.

The post, which was mandated by Congress, has gone unfilled since January 2017, when President Donald Trump took office.

"Around the world, violent and even lethal attacks have been made on Jews and Jewish institutions," the religious leaders said in a May 15 letter to Pompeo. "Physical harassment of Jews who wear a kippah (a small head covering) in public is all too common."

The letter added, "New campaigns of Holocaust distortion have been waged and there are proposals in some countries to ban central Jewish religious practices."

"Anti-Semitism starts with Jews, but doesn't end there," it said. "When any minority is threatened, everyone is less safe."

Cardinal Timothy Dolan of New York was one of the signers, as was Bishop Frank Dewane of Venice, Florida, and Bishop Joseph Bambera of Scranton, Pennsylvania, chairman of the U.S. bishops' Committee on Ecumenical and Interreligious Affairs.

Women religious signing the letter included Sr. Dianne Bergant, of the Congregation of St. Agnes and a retired professor at Catholic Theological Union; Sr. Rita Mary Harwood, a Sister of Notre Dame who is head of the Secretariat for Parish Life and Development for the Diocese of Cleveland; and Sr. Audrey Doetzel, a Sister of Our Lady of Sion who is assistant director of programs for Boston College's Center for Christian-Jewish Learning.

Among the laypeople signing the letter were Eugene Fisher, former associate director of the U.S. bishops' Secretariat of Ecumenical and Interreligious Affairs, who now teaches at St. Leo University in Florida; John Esposito, founding director of the Prince Alwaleed Bin Talal Center for Muslim-Christian Understanding at Georgetown University in Washington; and Elena Procario-Foley, professor of Jewish-Catholic studies at Iona College in New York.

In April a State Department spokeswoman told the Jewish Telegraphic Agency said that "combating anti-Semitism internationally remains a priority" for the Trump administration but did not say when the president would fill the post, created by a law passed in 2004. The spokeswoman said the State Department's Office of International Religious Freedom "continues actively to support the (envoy's) mission."