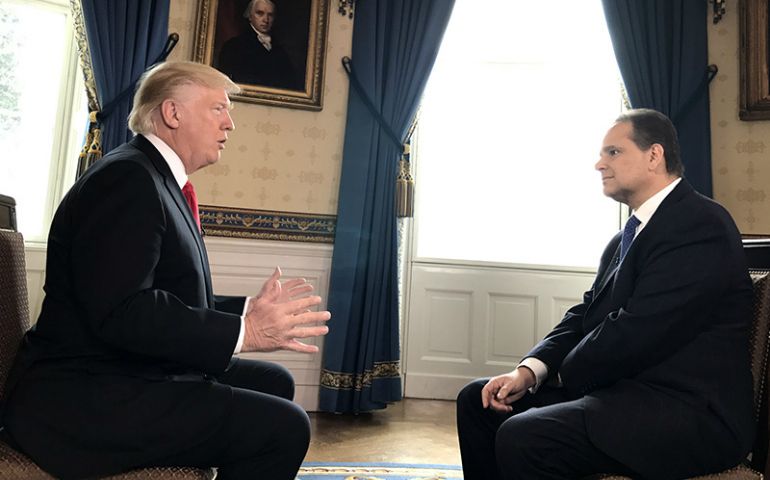 Washington, D.C. — When they got the get — the third one-on-one interview with President Trump — staffers at CBN News took a moment for high-fives to celebrate.

But then the journalists for the usually little-noticed Christian Broadcasting Network went to work to capitalize on the newfound access they’d received from the Trump administration.

“To be on par, if you will, with ABC and Fox News with Sean Hannity, it really gave me a sense that it was a new day in D.C.,” said chief political correspondent David Brody of his 17-minute interview with Trump. “He had said all along that it was time to change the way his administration dealt with the media. And I think he was making good on that promise by having CBN News be a major part of the media equation.”

Brody, 51, a Reform Jew-turned-evangelical Christian, said his team was particularly proud that the new president had made news speaking into their cameras. Trump discussed his views on prioritizing persecuted Christians, called much of the media “the opposition party” and spoke of how he needs God more than ever after entering the White House.

The news staffers at the conservative Christian network known more for sharing the gospel than for breaking news scrambled to get video clips to major networks. Trump’s words to them were quoted across national and international media, in as many as 5,300 outlets, CBN said. A network news release said the program drew 3.4 million video views plus “more than 700,000 views through President Trump’s social media share alone.”

By contrast, 700,000 daily viewers on average watch “The 700 Club” on cable, affiliate and syndicated outlets.

Sitting under the bright lights of CBN News’ Washington studio days after he had been in the interviewer’s chair, Brody said his pitch for a one-on-one with Trump wasn’t a hard sell. He just pointed to the audience he serves through news programming rooted in CBN’s flagship “700 Club” show, based at Virginia Beach, Virginia, headquarters.

“That’s been my pitch — that we are an audience made up of ‘deplorables’ who call themselves proudly deplorable and these are the folks that got Donald Trump elected president of the United States,” he said, echoing the term Democratic presidential nominee Hillary Clinton used in her campaign about Trump supporters. “If he’s really serious about cutting through the clutter of the mainstream media, then he needs to be looking to talk directly to our type of audience.”

Brody, who hosts and writes CBN’s “The Brody File,” believes his track record of nine previous interviews on the campaign trail helped the Trump camp know he could be “trusted as a journalist,” one who also had interviewed then-candidate Barack Obama four times.

The president tweeted after the interview: “I will be interviewed by @TheBrodyFile on @CBNNews tonight at 11pm. Enjoy!”

In addition to the interview, White House press secretary Sean Spicer has called on CBN correspondents three times within two weeks of briefings.

“Compare that to the Obama administration, which I covered most of his time at the White House,” said Jennifer Wishon, CBN News White House correspondent. “It was few and far in between.”

Though her seat remains in the middle of the back row of the briefing room, Wishon met Trump in the Blue Room before his Jan. 27 interview with Brody began. She said the president gave himself credit for the new access.

“I said, ‘Mr. President, ‘I’m Jennifer Wishon. I’m the White House correspondent for CBN News,” recalled Wishon, 37, a Southern Baptist. “He said, ‘I know. You got one of the first questions in that briefing.’ And I said, ‘Yes, sir. I appreciated that.’ He said, ‘That was me. That was because of me.’”

JUST NOW: @POTUS told me that I got an early question in the first briefing because of him.

While CBN News may be thanking Trump now, Michael Cromartie of the Ethics and Public Policy Center said, “At some point somebody might say, ‘When are you going to ask him a hard question?’ because he’s given them such attention and notoriety now.”

Brody said he’s already asked “substantive questions,” including some in the interview that aired on a CBN News special. He queried Trump about whether the president thinks the Muslim Brotherhood is a terrorist group and if he will move the U.S. embassy from Tel Aviv to Jerusalem. Trump did not directly answer either question.

This kind of access and prominence has long been a dream of CBN founder Pat Robertson, said University of Colorado scholar Stewart Hoover.

“Even from the earliest days of CBN and the earliest days of 'The 700 Club’ production, Pat Robertson very much wanted his network and his programming to be seen to compete with, to be part of the media landscape,” said Hoover, director of the Center for Media, Religion and Culture in Boulder.

Robertson, a 1988 Republican presidential candidate and founder of the Christian Coalition in the 1980s, is known for making provocative statements — and sometimes backtracking on them – against gays, yoga and God's hand in natural disasters. But, at age 86, he continues to have a presence on "The 700 Club," providing commentary and introduction to the news reports on most days. Gordon Robertson, his son and CBN’s CEO, serves as host on other days.

One of the most prominent members of the religious broadcasting industry, CBN is unusual in having a news operation along with testimonies, Bible teaching and humanitarian work. It is viewed on Freeform, the former Family Channel once owned by CBN, and on syndicates, affiliates and online.

Robertson and other leaders ensured that the hourlong “700 Club” — named for the 700 people who pledged $10 month to keep the early ministry afloat — would maintain a time slot on the channel no matter who owned it. The show continues to air on Freeform three times a day.

The Eternal Word Television Network, a global Catholic network founded in 1981, is another religious broadcaster with a news operation. It has had a weekly news program for 20 years and has featured a nightly news show since 2014, said spokeswoman Michelle Johnson.

National Religious Broadcasters President Jerry Johnson said he is encouraged to see the inclusion of Christian media in the first weeks of the Trump administration.

“It is obvious the old mainstream media missed something in this last election cycle,” said Johnson, whose organization has included CBN’s membership since 1968. “CBN and other Christian outlets help complete the picture.”

Social media watchers as well as mainstream journalists are taking note of the news outlet, which featured the Trump interview, the inauguration and a recent interview with evangelist Franklin Graham on Facebook Live and its website. Its Facebook likes have grown by more than 50 percent in the last year, topping 677,000 as of Tuesday.

CBN, the first Christian television network in the U.S., was founded by Robertson in 1960 when he arrived in Portsmouth, Virginia, with $70 to his name. Robertson interviewed then-Georgia Gov. Jimmy Carter in 1976, and CBN’s news operation grew after President Reagan took office in 1981. It became known as CBN News a year later. Its journalists have had White House credentials since the 1980s, and its staff of about 80 full-time people works in Washington, Jerusalem and the Virginia Beach headquarters.

The Washington studio is in the back of a small office on a busy street in the nation’s capital. Like other broadcast operations, the office includes a green room, a makeup room and a control room. A slight hint that it might be different from others is an introductory DVD to the Museum of the Bible, set to open in Washington later this year, that was left on a desk.

Journalists who work in the office with bright white walls, red columns and a TV set to CNN say their biblical worldview is evident at the close of the daily editorial meetings they conduct via video conference.

“We have a Christian newsroom, we’re a nonprofit and we can hire Christians, and we, in many respects, are overt about that,” said news director Rob Allman, 55 and an evangelical. “So we pray during meetings, we pray before big stories.”

.@TheBrodyFile interview with @POTUS @realDonaldTrump almost here. 11pm ET on @FreeformTV .This is even more exciting than my Bar-Mitvah! pic.twitter.com/5plvJi9vrO

Brody said he opts to pray privately for political leaders “in my own spare time.”

But, as he makes plans to ramp up new programming for his network that has been noticed "much more than we could have ever hoped for,” he considers results that relate to journalism as well as Jesus.

“If there are more eyeballs on the news program, then the hope, the prayer, is that there’ll be more clicks and eyeballs on maybe a few other things on our websites that have to do with Jesus,” Brody said. “And if news is a conduit to that, great.”