US bishops urged to find ways to welcome, serve immigrants 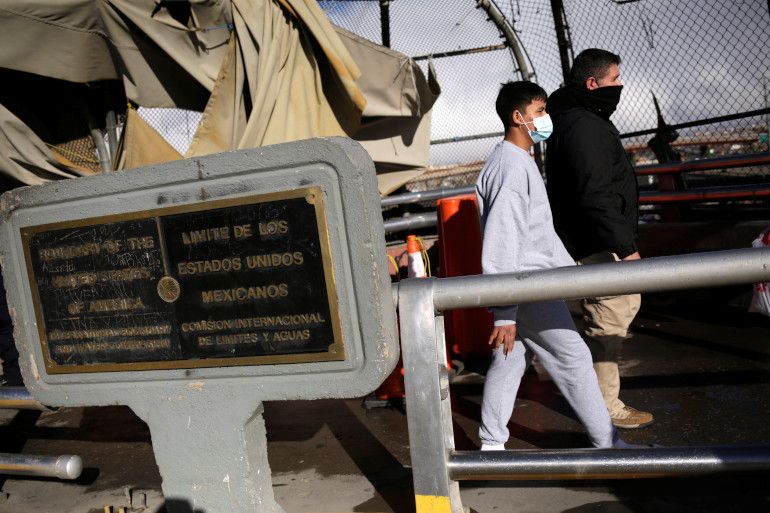 A migrant is deported from the U.S., and into Ciudad Juarez, Mexico, through the Paso del Norte international border bridge Jan. 26, 2021. (CNS photo/Jose Luis Gonzalez, Reuters)

Washington — Bishop Mark J. Seitz of El Paso, Texas, encouraged prelates meeting via Zoom for the U.S. bishops' virtual spring assembly to find ways to welcome what may be a growing number of immigrants to their dioceses and to serve them the way they would serve Christ.

"I like to invite every diocese to see how your churches might participate in the beautiful experience of welcoming migrants and sharing their stories," said Seitz on June 18, the last day of the three-day meeting.

"This isn't an experience just for border dioceses but can be an invitation to the entire church to welcome Christ in the stranger, with compassion, dignity and hospitality," he said. "It can renew your ministry. It can renew your parishes. Don't be afraid to reach out."

His words were part of a presentation by Auxiliary Bishop Mario E. Dorsonville of Washington, chairman of the U.S. Conference of Catholic Bishops' Committee on Migration, who shared the recent status of various immigration projects awaiting action by Congress.

He said that while the Biden administration has expressed interest in seeing these projects advance, "we hope they fulfill that commitment," since it would require the support of other lawmakers, too.

Dorsonville gave the bishops a brief presentation on a June 1 and 2 gathering of prelates from the U.S., Central America and Mexico, along with those in charge of various prominent Catholic organizations, at Mundelein Seminary outside Chicago to talk about welcoming migrants, advocating for them and exploring the causes that force many to leave their home countries.

The church believes in the dignity of every person, "regardless of immigration status," Dorsonville said.

Seitz said that as a border bishop, "I see Christ knocking at our door in the presence of people on the move." They are what he called "part of a great Central American exodus, people escaping death, fleeing poverty, violence, persecution and looking for hope."

The gathering at Mundelein, which Seitz helped organize, allowed an opportunity to share with bishops from the countries that have great numbers of people fleeing -- Honduras, Guatemala and El Salvador -- as to how all can minister to those wanting to leave, those who make the decision to go and even those who return home because of deportation or other events.

Mixing English and Spanish, Seitz said Pope Francis "has called us to be a church en salida (on the move)," and by those actions God provides certain graces, he said.

"The poor make us people of greater compassion. They give us an opportunity to be touched and pulled out of ourselves," he said.

He told bishops to prepare to welcome migrants in the near future, particularly if a policy held over from the Trump administration that keeps migrants out because of the pandemic is removed, bringing an increase in arrivals.

"In the next several months, I can tell you that there will be an increase in the number of those arriving at the border," he said. "Don't be afraid to reach out in this work. I've come to know better my brother bishops from Mexico and Central America, and I've also come to see that through the experience of this current exodus, God is also calling us to a deeper solidarity with the church and sending countries to enrich our ministry together."

He spoke of the need to talk to those in charge about the need to overcome "our nation's spiritual isolation, our people's addiction to drugs, which funds the narco gangs south of our border, the empty consumerist culture and the persistent sin of racism."

"In Central America and Mexico, we need to stand with those who are working to promote just societies, just economies to stamp out corruption and to create societies where families can dream of a future for their children so they don't have to migrate," Seitz said.

"I warmly invite you to join the many efforts we are now engaged in, together with the Catholic NGOs to deepen the bonds between our churches and our peoples and to work together for a society that better reflects the reign of God," he added. "This work is transformation and grace-filled."

Chicago Cardinal Blase J. Cupich, who also attended the gathering at Mundelein, spoke to the bishops about ways immigrants are talked about.

"We hear so much vitriol and read harsh language about the people who come to our borders as refugees," he said. "We as a nation have to take more responsibility for the fact that it is the drug use of this country that is producing this violence and terror, because the money for the weapons, and even the weapons themselves, are coming from this country."

Cupich urged bishops to mention this when talking to legislators in their localities who serve in Washington, "particularly lawmakers who craft policy."

"It would be important to let them know that we, as a nation, have more responsibility to the refugee crisis that is being created, that is at our border, people fleeing violence and terror at the hands of people who have weapons and money from this country," he said.

That message has not been clear to representatives in Washington, the cardinal said, and "they very easily make villains of the people who are at our borders sometimes, when in fact they're just trying to survive the violence and terror that's in their homeland."

Archbishop John C. Wester of Santa Fe, New Mexico, who also attended the Mundelein gathering, said bishops were in a unique position to put a human face on the immigrant because they come into contact with them in their ministry.

"I think that's one of the most effective ways to counter a lot of the false information and the fear spread in our country about immigrants," he said.

Seitz said that while there may be frustration with a lack of action by lawmakers on immigration, "I urge us to remember that we are a people of hope. This is a moment of opportunity. It is our job as pastors to be ambassadors of hope."

Theology of a taco truck

Politics used to be fun. Now, it is depressing