Without redesignation, fewer Syrians are eligible for temporary protected status 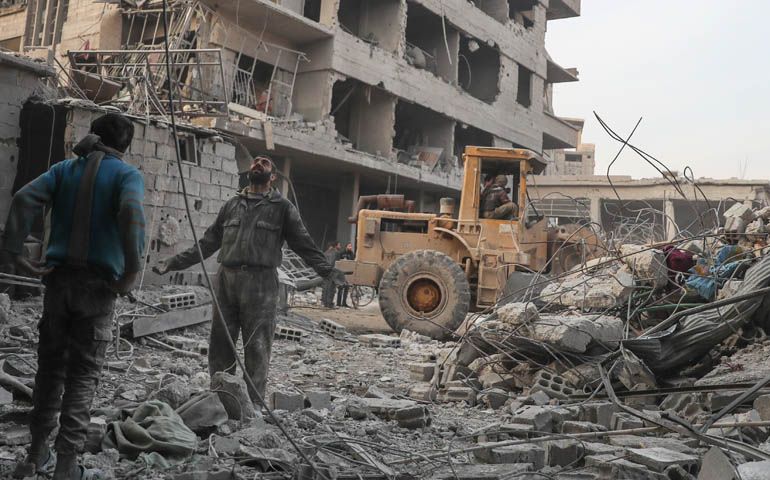 A man prays amid destroyed buildings after several airstrikes Jan. 9 in Hamoria, Syria. The Department of Homeland Security's extension of Temporary Protected Status for 6,900 Syrians in the United States since 2016 leaves hundreds of more recently arrived refugees at risk, said the executive director of the Catholic Legal Immigration Network. (CNS/Mohammed Badra, EPA).

The worst fears of nearly 7,000 Syrian immigrants and their allies were allayed when the Department of Homeland Security announced Jan. 31 that it would renew Syria's temporary protected status for another 18 months.

"We see firsthand that it's not safe for Syrians to return home, and I think the Trump administration acknowledged that in their announcement yesterday," said Giulia McPherson, interim executive director for Jesuit Refugee Services. "We would encourage the Trump administration to take a closer look at their decision and consider redesignation to extend protection to a larger group of Syrians."

Temporary protected status grants immigrants from countries that are experiencing violence, natural disasters or other dangerous and temporary conditions permission to work and remain in the U.S. as long as the Department of Homeland Security continues to designate their country as too dangerous to receive them.

In order to be eligible for the program, which does not include a path to any sort of permanent legal status, immigrants must pass a background check and have been present in the U.S. since before the designation, or most recent redesignation, was granted.

It is unclear how many additional Syrians would be eligible for the status if the country were redesignated, but Patricia Zapor, communication director for the Catholic Legal Immigration Network (known as CLINIC), said estimates range from several hundred to a few thousand.

Syrians are certainly still fleeing the country as violence continues, said McPherson. "Families and individuals are still fearful for their lives and for their children's lives and they are continuing to leave."

A report from CLINIC released Jan. 24 had urged the government to renew and redesignate Syria's status, which is due to both "ongoing armed conflict" and "extraordinary and temporary conditions." The report described the conflict in Syria as "the largest refugee and humanitarian crisis since World War II"; according to the U.N. Refugee Agency, over 5.4 million people have fled Syria since 2011, while 6.1 million are internally displaced.

CLINIC also named "Catastrophic loss of infrastructure and functioning economy," "destruction of health care infrastructure and targeted killings of medical workers," "widespread and indiscriminate use of torture against civilians" and "siege warfare and food and water crisis" as additional factors that warrant the extension of temporary protected status.

The assessment of Syria's danger is echoed in the State Department's travel advisory for the country, which warns that "No part of Syria is safe from violence. Kidnappings, the use of chemical warfare, shelling, and aerial bombardment have significantly raised the risk of death or serious injury."

Before it was renewed, Syria's status was scheduled to expire on March 31, 2018; it will now extend until at least Sept. 30, 2019. DHS was required to decide whether to terminate the status or renew it for up to 18 months on Jan. 30, about two months before the status expired.

Groups that spoke out in favor of Syria's status being renewed and redesignated included CLNIC, Alianza Americas, a coalition of Syrian American organizations, Church World Service, and a collection of 231 faith leaders and 64 faith-based organizations.

In a Jan. 31 statement announcing the decision, Secretary of Homeland Security Kirstjen Nielsen said it was "clear that the conditions upon which Syria’s designation was based continue to exist, therefore an extension is warranted under the statute. We will continue to determine each country’s TPS status on a country-by-country basis."

The statement did not address the reasons for failing to redesignate Syria, but mentioned that those who do not meet the requirements of residence since Aug. 1, 2016, and continuous physical presence since Oct. 1, 2016, "may be eligible to seek other forms of immigration relief."

Zapor speculated that the decision not to redesignate was "part of the administration's overall tendency to try to greatly reduce temporary protected status in general," although she emphasized the administration hasn't explained its reasoning.

Yanira Arias, a national campaign manager for Alianza Americas, pointed out that the administration also has a history of restricting Syrian immigrants, having temporarily banned the admission of Syrians to the U.S. The recent decision is "good news for those who are already protected by the program, but definitely it brings a lot of uncertainty" for those who entered later, she said.

"It is illogical not to redesignate a country that is so obviously in the midst of a catastrophic conflict," said William O'Keefe of Catholic Relief Services. "These people are some of the most vulnerable people in the world who have been through horrific struggles to escape violence and get here," he added. "They need to be protected."

O'Keefe, McPherson and Zapor said they were compelled by their faith to defend immigrants and refugees such as Syrian temporary protected status holders.

"In general, Catholic teaching is that people have a right to migrate, including if their own countries are no longer able to sustain them or are flat out dangerous as is the case in Syria," said Zapor. "We have a human rights obligation to protect people from these difficult places, whatever reason people can't live in their home country anymore."

Politics | US extends Syria's temporary protected status, but does not redesignate country