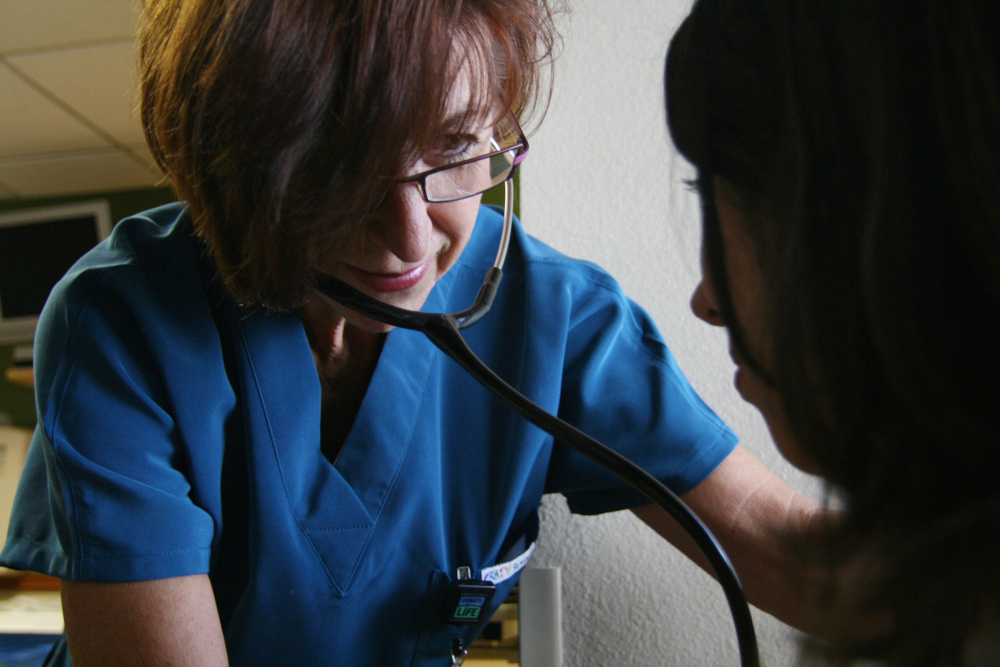 A nurse listens to the heartbeat of an unidentified woman at St. Joseph's Hospital and Medical Center in Phoenix. An overwhelming majority of Americans, 83%, said they support conscience protection rights for health care professionals because they should not be forced to perform procedures against their moral beliefs. (CNS/The Catholic Sun,J.D. Long-Garcia)

An overwhelming majority of Americans – 83% – said they support conscience protection rights for health care professionals because they should not be forced to perform procedures against their moral beliefs.

Ninety-one percent of faith-based health care professionals said they need conscience protections and would rather stop practicing medicine altogether than be forced to violate their conscience.

These responses came in two polls conducted in July and were released Sept. 18 along with several other findings by the U.S. Conference of Catholic Bishops' committees on pro-life activities, religious liberty, domestic policy and social development, and their subcommittee on promotion/defense of marriage and the Christian Medical & Dental Associations, the largest faith-based organization for health care professionals.

Representatives of the U.S. bishops' conference, the medical-dental organization and Heart + Mind Strategies, the polling firm that conducted the surveys, discussed the results on an afternoon press call.

Greg Schleppenbach, associate director of the bishops' conference Secretariat of Pro-Life Activities, said the impetus for conducting these polls was the recent action by the Trump administration to put new regulations forward to enforce about 25 existing conscience protection laws.

"(This) has put the whole issue of conscience protection into the news," he noted.

In May, President Donald Trump announced a conscience protection rule that says medical workers or institutions would not have to provide, participate in or pay for procedures they object to on moral or religious grounds, such as abortion and sterilization. It was to have taken effect July 22, but enforcement was postponed because it is being challenged in court.

The Trump administration also has proposed a regulation to modify some wording in section 1557 of the Affordable Care Act "that needs clarification."

Section 1557 prohibits discrimination based on race, color, national origin, sex, age and disability in health programs and activities receiving federal financial assistance. Schleppenbach said there is a Trump administration proposal to restore in that section the long-standing position of the federal government that discrimination on the basis of "sex" does not refer to "termination of pregnancy" nor "gender identity."

There is a nationwide injunction blocking implementation of section 1557. On Dec. 31, 2016, a U.S. District Court judge in Texas issued the ruling in Franciscan Alliance v. Burwell.

The suit was filed in the Northern District of Texas in August 2016 by a group of religiously affiliated health organizations and states who argue that as written by the Obama administration, doctors who refuse to recognize abortion or sex-change operations as appropriate medical care can face prosecution for sex discrimination.

Also in the news was an enforcement action filed in late August of this year by the U.S. Department of Health and Human Services against the University of Vermont Medical Center, which is alleged to have coerced a nurse into participating in an abortion against her beliefs.

He said a negative perception of such protections is regularly promoted by opponents, like Planned Parenthood, who make it sound like those in favor of such safeguards means health care professionals would even refuse to take a pregnant woman in need to a hospital.

In reality, health care workers have the right to practice health care in accordance with deeply held convictions, whether they are moral or religious or ethical, he said.

This goes beyond an objection to performing an abortion, he said, noting that he heard from a resident whose refusal to participate in an abortion was accepted by his superiors only to be told he would still have "to count the body parts" to make sure all of the fetus had been removed. The resident refused and faced disciplinary action, Stevens said.

"This is a huge issue" and getting bigger, he noted, as medical professionals are dealing with ever more issues, including the growing legalization of physician-assisted suicide.

Referring to the survey finding that health care professionals will leave health care altogether if they do not have conscience protections, Stevens said patients who will be most hurt by this are in low-income urban areas and rural areas.

In a joint statement issued with the poll results, several bishops' conference committee chairs said: "An overwhelming majority of Americans agree: No health care professional should be forced to violate deeply held beliefs in order to keep a job."

"The practice of medicine depends on those courageous and generous enough to serve all people – especially the poor and marginalized – with the highest ethical standards," they said. "If we exclude people of faith from the medical profession, Americans will suffer, especially those most in need."