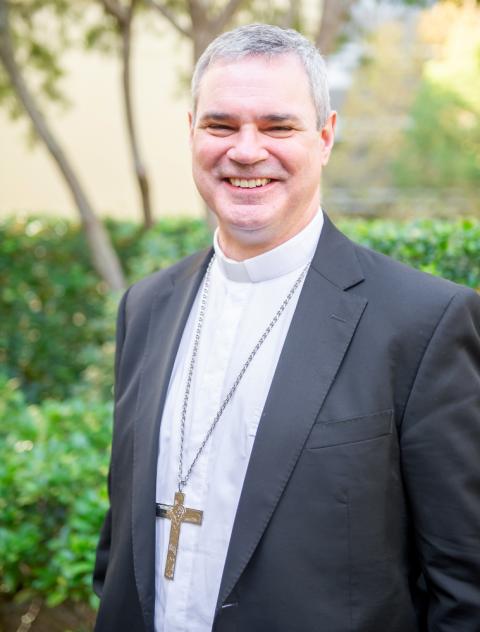 Bishop Peter Comensoli of Broken Bay, Australia, is seen in this undated photo. He has been named archbishop of Melbourne. (CNS/courtesy ACBC)

Pope Francis has named Archbishop Peter Comensoli as the ninth leader of the Archdiocese of Melbourne.

Comensoli, 54, the bishop of Broken Bay, Australia, since 2014, succeeds Archbishop Denis Hart, 77, who is past the age at which canon law requires bishops to turn in their resignation.

The new archbishop said in a statement that he accepted the call "to be a new missionary among God's people of the Archdiocese of Melbourne" while acknowledging "the great responsibility entrusted to me, along with the frailties I carry."

The appointment comes as the Australian Catholic Church contends with the fallout from criminal charges against two high-ranking leaders within the church in regarding cases of clerical sexual abuse.

Cardinal George Pell, head of the Vatican Secretariat for the Economy, is the most senior church official to face criminal charges in connection with child sexual abuse. He took a leave of absence from his position in the summer of 2017 to face charges of sexual abuse of minors from the 1970s, when he was a priest, and the 1990s, when he was archbishop of Melbourne.

Although Pell has consistently denied the charges, in early May an Australian magistrate ordered him to stand trial, saying she believed there was enough evidence presented in connection with about half the original charges to warrant a full trial.

On May 23, Archbishop Philip Wilson of Adelaide announced that he was stepping aside from his duties after being convicted of covering up allegations of clerical sexual abuse.

Comensoli said the people of Melbourne had been in his prayers.

"I am deeply aware of the painful witness you bear because of the crimes committed in the church against the most innocent, our children and the vulnerable. I share the bewilderment and anger you feel at the failure of church leaders to believe victims and to respond to them with justice and compassion," Comensoli said in a statement released by the Diocese of Broken Bay.

He said it "is our solemn shared duty to right the grievous wrongs of the past and ensure that the future is very different."

Archbishop Mark Coleridge of Brisbane, president of the Australia Catholic Bishops' Conference, welcomed the appointment, saying the new archbishop "has a good mind, an engaging personality and the strong pastoral sense needed in our largest diocese at complex time like this."

"He's a man who can listen and a man who can speak not only to Catholic people, but to the wider community as well," Coleridge said.

The new archbishop was ordained to the priesthood for the Diocese of Wollongong in 1992. He was appointed auxiliary bishop of the Archdiocese of Sydney in 2011 and served as the apostolic administrator of the archdiocese for eight months in 2014 until the appointment of a new archbishop.

Comensoli was to be installed during a Mass Aug. 1 in St. Patrick Cathedral in Melbourne.

The Archdiocese of Melbourne is the largest in Australia, with 1.1 million Catholics.