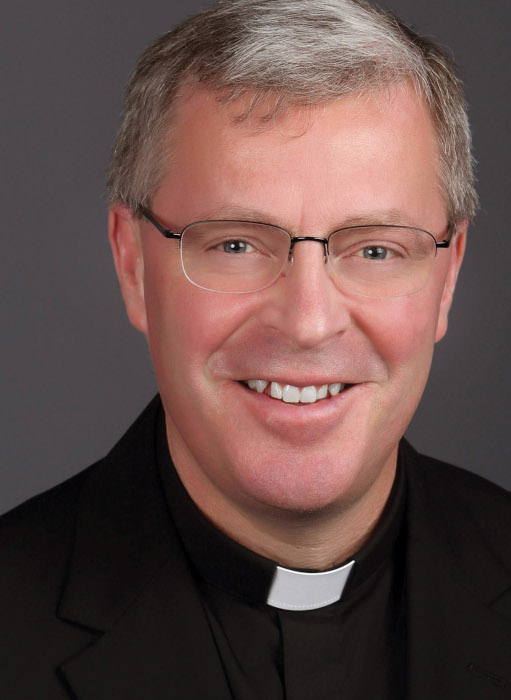 The appointment was announced in Washington Oct. 8 by Archbishop Christophe Pierre, apostolic nuncio to the United States.

Bishop-designate Vetter, 52, succeeds Bishop George L. Thomas, who was named in February 2018 to head the Diocese of Las Vegas, after 14 years as Helena's bishop. Msgr. Kevin O'Neill was elected Helena's diocesan administrator by the College of Consultors May 17, 2018, two days after Thomas was installed in Las Vegas.

Vetter's episcopal ordination Mass and installation will be celebrated Nov. 20 at the Cathedral of St. Helena.

The newly named bishop has been rector-pastor of the Cathedral of the Holy Spirit in Bismarck since 2018. He also is a vice chairman of the board of directors of Light of Christ Catholic Schools in Bismarck. From 2012 to 2018, he was director of spiritual formation at the Pontifical North American College in Rome.

Austin Anthony Vetter was born in Linton, North Dakota, Sept. 13, 1967, to August and Loretta Vetter. The youngest of 12 children, he was raised on a farm and educated in the Linton Public School System. After graduation, he attended North Dakota State University and Cardinal Muench Seminary in Fargo, North Dakota.

After receiving his bachelor of arts degree in philosophy, he studied in Rome at the Pontifical North American College and the Pontifical University of St. Thomas Aquinas, known as the Angelicum. He was ordained a priest for the Diocese of Bismarck by Bishop John F. Kinney at the Cathedral of the Holy Spirit in Bismarck June 29, 1993.

Vetter's first assignment was as parochial vicar at the Cathedral of the Holy Spirit. He was a religion instructor at St. Mary's Central High School in Bismarck from 1994 to 1999. In North Dakota, he was pastor of St. Martin's Church in Center, St. Patrick's Church in Dickinson and St. Leo the Great Church in Minot.

From 2004 to 2007, Vetter was an adjunct faculty member for the Institute for Priestly Formation at Creighton University in Omaha, Nebraska, where he taught courses on "The Spirituality of the Diocesan Priest."

Vetter has held various roles in the Diocese of Bismarck, including serving on the presbyteral council and priest personnel board. He has been vicar for the permanent diaconate, has served as master of ceremonies to the bishop and also has been director of continuing education of the clergy.