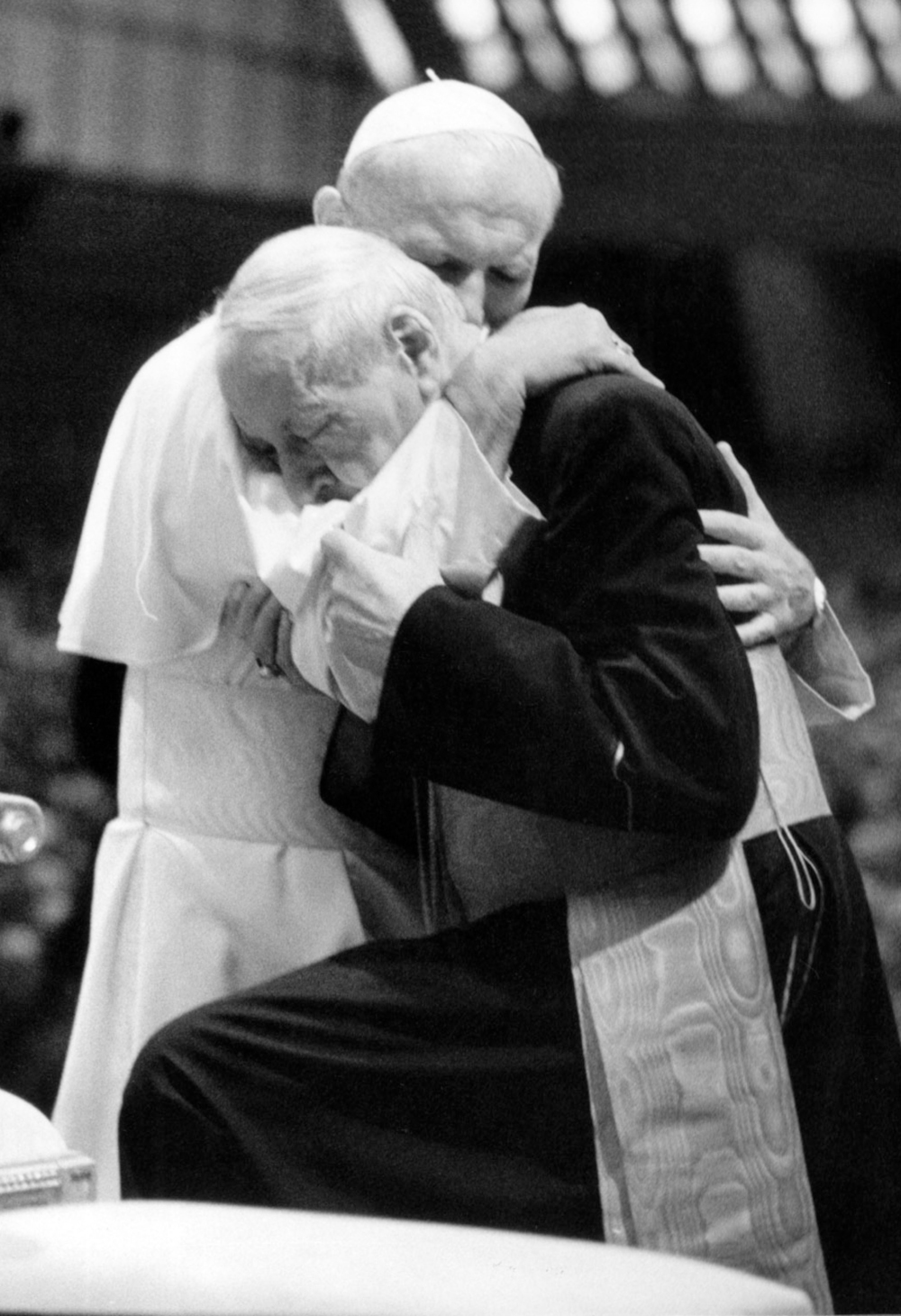 Pope John Paul II and Cardinal Stefan Wyszynski embrace at the Vatican in this 1978 photo. Pope Francis recognized the miracle needed for the beatification of Wyszynski, a mentor and friend of St. John Paul. (CNS/composite photo from Family Theater Productions and Arturo Mari, L'Osservatore Romano)

Pope Francis recognized the miracle needed for the beatification of Cardinal Stefan Wyszynski, a mentor and friend of St. John Paul II.

The pope also signed decrees recognizing the miracles needed for the future beatifications of Fr. Francesco Mottola, an Italian priest who founded the Secular Institute of the Oblates of the Sacred Heart, and Alessandra Sabattini, an Italian laywoman who volunteered helping people with drug addictions and those with disabilities through the Pope John XXIII community, run by the late Fr. Oreste Benzi. She died in 1984 at the age of 22 after being struck by a car.

The other decrees included recognition of the martyrdom of Juan Roig Diggle, a 19-year-old layman who was killed in 1936 during Spain's civil war, and Benigna Cardoso da Silva, a 13-year-old laywoman who was murdered in 1941 in Brazil by a would-be rapist.

The pope signed the decrees after a meeting Oct. 2 with Cardinal Angelo Becciu, prefect of the Congregation for Saints' Causes. The Vatican published the news the next day.

The late Wyszynski had been the primate of Poland and one of the late pope's most ardent supporters, starting when then-Karol Wojtyla was a young bishop.

Born in 1901, he became a priest in 1924 and was made the bishop of Lublin in 1946 -- a time when hundreds of thousands of Soviet soldiers were stationed there and communist powers took hold.

In 1948, he was made archbishop of Gniezno and Warsaw, and he was named a cardinal in 1953. But he could not be installed until four years later, in 1957, after his release from a communist prison.

His 1953 arrest was one of the most dramatic events of the communist period. It followed the parallel detention of church leaders in Croatia, Hungary and Czechoslovakia. The cardinal, primate of Poland from 1948 until his death in 1981, spent three years under house arrest in the 1950s because of his opposition to Poland's communist government.

In 1958, he informed a 38-year-old Wojtyla that the pope had appointed him as the auxiliary bishop of Krakow. Pope John Paul said when the archbishop presented him as a newly named bishop to a group of priests, he said, "Habemus papam" ("We have a pope"), the formula used to announce a papal election.

When then-Cardinal Wojtyla was named to first world Synod of Bishops in 1968, he stayed home to protest the government's denial of a passport to Wyszynski.

When cardinals were meeting in the Sistine Chapel in October 1978, the Polish pope recalled that Wyszynski had approached him and implored, "If they elect you, I beg you not to refuse.''

During the same meeting, the pope signed decrees recognizing the heroic virtues of: Italian Archbishop Augusto Cesare Bertazzoni, who died in 1972; Fr. Louis-Joseph Querbes (1793–1859), the French founder of the Clerics of Saint Viator, a religious order that specializes in teaching; and a cloistered nun, Sr. Maria Francesca of the Child Jesus.