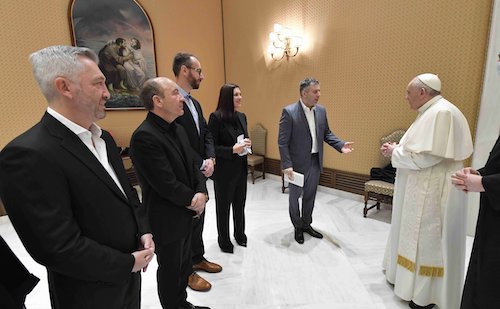 Pope Francis greets filmmaker Evgeny Afineevsky and others involved with the production of the documentary, "Francesco," before the papal general audience at the Vatican Oct. 21. (CNS/Vatican Media)

Editor's note: After the publishing of this story Oct. 22, Mexican broadcaster Televisa confirmed that the documentary "Francesco" had used portions of its interview with Pope Francis from May 2019.

With regard to why the original airing of the interview did not include the pontiff’s words about civil unions, Televisa gave dueling rationales. An official statement said the comments were not included because the primary focus of the papal interview had been the February 2019 Vatican summit on clergy sexual abuse.

Several outlets have reported however that the Vatican prevented Televisa from originally using the clip. "Someone at the Vatican gave us the part that we did broadcast, and later they gave the rest of the material to someone else," Televisa spokesman Ruben Acosta Montoya told The Washington Post. 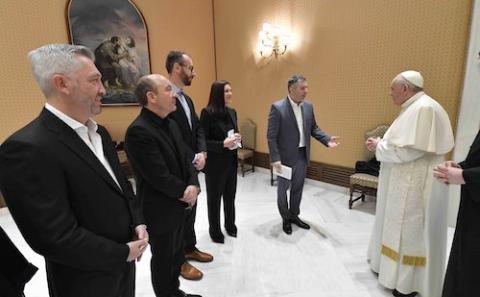 Pope Francis greets filmmaker Evgeny Afineevsky and others involved with the production of the documentary, "Francesco," before the papal general audience at the Vatican Oct. 21. (CNS/Vatican Media)

Analysis of a clip in a new documentary in which Pope Francis expresses support for civil union laws for same-sex couples appears to indicate some of the pontiff's words came from an earlier interview in which he also clearly said he does not approve of gay sexual relationships.

The clip in the new film, which is titled "Francesco" and premiered in Rome Oct. 21, seems to have been taken from a previous interview given to a TV journalist in 2019.

Although Francis did say in that television interview, as shown in the documentary, that gay people are "children of God" and "have a right to be part of the family," the pope also added: "That does not mean approving of homosexual acts, not in the least."

In the documentary, Francis also suggests that civil union laws may provide a way for countries to protect the legal rights of persons in same-sex relationships.

Report of those comments ignited a wave of intense reaction across the U.S., with celebrities such as Ellen DeGeneres praising the pope and several bishops issuing statements to tamp down expectations that official church teaching on gay relationships had changed.

At least part of the clip in question from the new film appears to be a reusing of material from journalist Valentina Alazraki's interview with Francis for the Mexican TV network Televisa, which aired in May 2019.

Comparison of the film clip with Alazraki's interview, which is available online in Europe and as a transcript elsewhere, indicates the film reuses at least a portion of previously aired material, in which Francis says gay people "have a right to be part of the family."

The material used in that segment of the film and in Alazraki's interview are identical, with Francis saying the same words in Spanish, using the same gestures, and sitting in the same setting.

The documentary does not use the segment of tape from Alazraki's interview in which Francis repeats again that gay people "have a right to a family," before adding: "That does not mean approving of homosexual acts, not in the least."

The film instead cuts briefly away from Francis, to show images of the Vatican's Santa Marta residence, before returning back to him. When the film shows the pope again, he is seated in the same setting as before and states: "What we have to create is a civil union law. That way they are legally covered."

That second portion of Francis' words in the documentary did not originally appear in the video of Alazraki's interview.

Asked by NCR if the clip used in the new film was an unused portion of her interview, Alazraki said Televisa was currently evaluating the clips in question. The Vatican press office and Evgeny Afineevsky, the film's director, did not immediately respond to requests for comment on the matter.

One possibility for why the pope's comments about civil unions were not originally included could be that the broadcaster did not find them newsworthy, as the pontiff had spoken in favor of civil unions on at least two prior occasions, in 2017 and 2014. Another is that the Vatican or the pope originally asked the comments not be used.

Afineevsky, who is gay, appeared at a Vatican ceremony Oct. 22 to accept an award from Rome's Film Festival but declined to take questions from journalists.

One of Francis' closest advisors has said the pope's comments in the documentary came from the television interview.

"There's nothing new because it's a part of that [television] interview," Jesuit Fr. Antonio Spadaro, editor of Italian magazine La Civilta Cattolica, told the Associated Press.

Related: Not news: Pope Francis has supported civil unions for years
A version of this story appeared in the Nov 16-29, 2018 print issue under the headline: Pope on civil unions? It's complicated of gay sexual relationships.