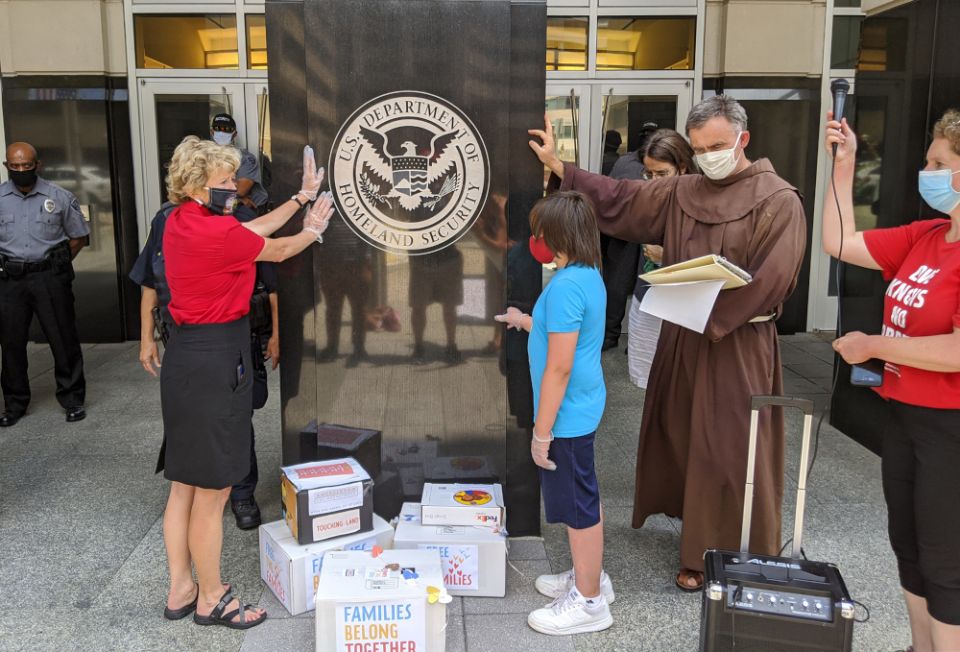 Franciscan Father Jacek Orzechowski prays over 300,000 petition signatures during a rally July 27,2020, outside the U.S. Immigration and Customs Enforcement headquarters in Washington. The petition demands the agency release children currently in detention, but the building's security detail would not accept the signatures. (CNS/courtesy Franciscan Action Network)

Washington — Franciscan Fr. Jacek Orzechowski and dozens of other immigration advocates rallied outside the Washington headquarters of U.S. Immigration and Customs Enforcement July 27 calling on the agency to release immigrant children being held in detention with their parents.

The group also brought 300,000 signatures on a petition demanding the agency release the children, but the building's security detail would not accept the signatures they tried to deliver.

"St. John Paul II reminds us that 'the family is the sanctuary of life, a domestic church where we receive our formative ideas about truth and goodness, where we learn to be truly human," Orzechowski said in a statement. "Family is at the heart of the culture of life."

"Separating children from their parents, subjecting them to grave physical and emotional harm is dehumanizing, callous and a part of the culture of death," said the priest, a friar with the Franciscans' Holy Name Province, who currently directs parish community organizing and advocacy efforts at Catholic Charities in the Archdiocese of Washington.

He urged ICE to "choose life" and "release from your custody the immigrant children together with their parents."

The event came on the day a federal judge had set for the government to remove all children held for more than 20 days in three facilities in Texas and Pennsylvania. According to The Associated Press, ICE did not release 100 immigrant children detained with their parents by the deadline.

U.S. District Judge Dolly Gee of the U.S. District Court for the Central District of California, located in Los Angeles, ordered the children's release in a late June ruling. She originally set July 17 as the deadline and then extended it to July 27.

On July 25, she denied a request from the Trump administration for another extension. In her June ruling, she described family detention centers as “on fire” due to the threat of the coronavirus. However, she did not order the release of the parents with the children, only that the children should be released to other family members or sponsors.

AP reported July 28 that ICE has released thousands of detainees since the beginning of the pandemic, "including hundreds of parents and children since April." It also said the three family detention centers in Texas and Pennsylvania that are the focus of Gee's order "are well below their capacity."

ICE has not commented about Gee's deadline having passed, but the AP story said that "lawyers for both sides 'continue to dialogue'" and expected to provide an update to Gee in the next week.