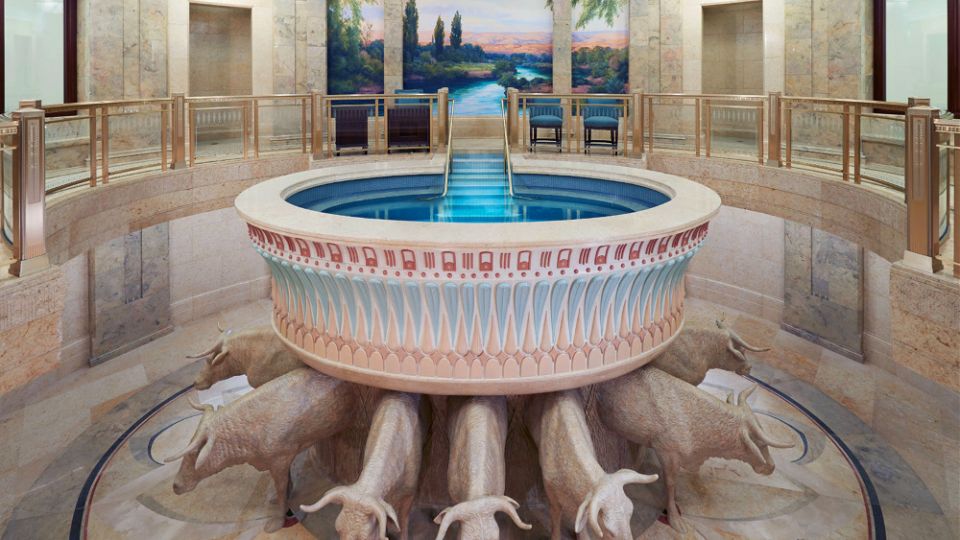 The baptistry of the LDS temple in Phoenix, Ariz. (©2017 Intellectual Reserve, Inc.)

The Church of Jesus Christ of Latter-day Saints announced Thursday (April 4) that church members in same-sex marriages will no longer be considered apostates. The policy change also clears the way for children of LGBT members to be baptized.

"Previously, our Handbook characterized same-gender marriage by a member as apostasy," the church said in a statement posted on its online newsroom. "While we still consider such a marriage to be a serious transgression, it will not be treated as apostasy for purposes of Church discipline. Instead, the immoral conduct in heterosexual or homosexual relationships will be treated in the same way."

LGBT parents can request that their children be blessed under the new policy. Their children can also be baptized "if the custodial parents give permission for the baptism and understand both the doctrine that a baptized child will be taught and the covenants he or she will be expected to make."

Church leaders said the new policy does not change the church's position on marriage. Same-sex marriage will still be considered a "transgression."

Still, they hope the changes will be seen as an act of goodwill.

"We want to reduce the hate and contention so common today," the statement read. "We are optimistic that a majority of people — whatever their beliefs and orientations — long for better understanding and less contentious communications."

In 2015, the LDS church announced that children of LGBT parents could not be blessed or baptized. Church President Russell Nelson reaffirmed the policy in 2016, calling it a "revelation from God," according to The Salt Lake Tribune.

The new policy will be sent to Mormon leaders around the world and will be included in an update to the church handbook. The church's statement also referenced comments made by President Henry Eyring at a General Conference Leadership Session.

Eyring spoke about the church's belief in continuing revelation, according to the release.

"One reason is that we need the Lord's direction to meet changing circumstances, and He has guided changes in practice and policy throughout the history of the Church," the statement said.