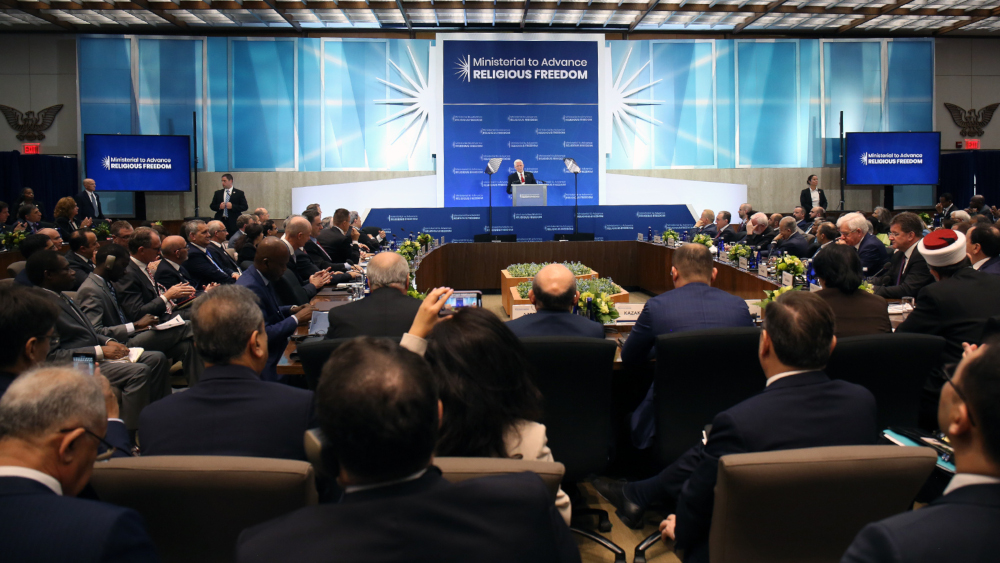 The developments July 18 were among the highlights of the last day of the State Department’s Ministerial to Advance Religious Freedom. Foreign ministers also took turns stating ways their nations are working to affirm religious liberty. That followed two days of meetings where survivors shared their stories of persecution and some of the almost 900 religious leaders and activists in attendance made plans to foster interfaith understanding.

Before a gathering of representatives of 106 countries, Secretary of State Mike Pompeo announced plans to create the International Religious Freedom Alliance.

"We hope that this new vehicle — the first-ever international body devoted to this specific topic – will build on efforts to date and bring like-minded countries together to confront challenges of international religious freedom," he said. "It will provide a space for the work that we do here to flourish throughout the year." 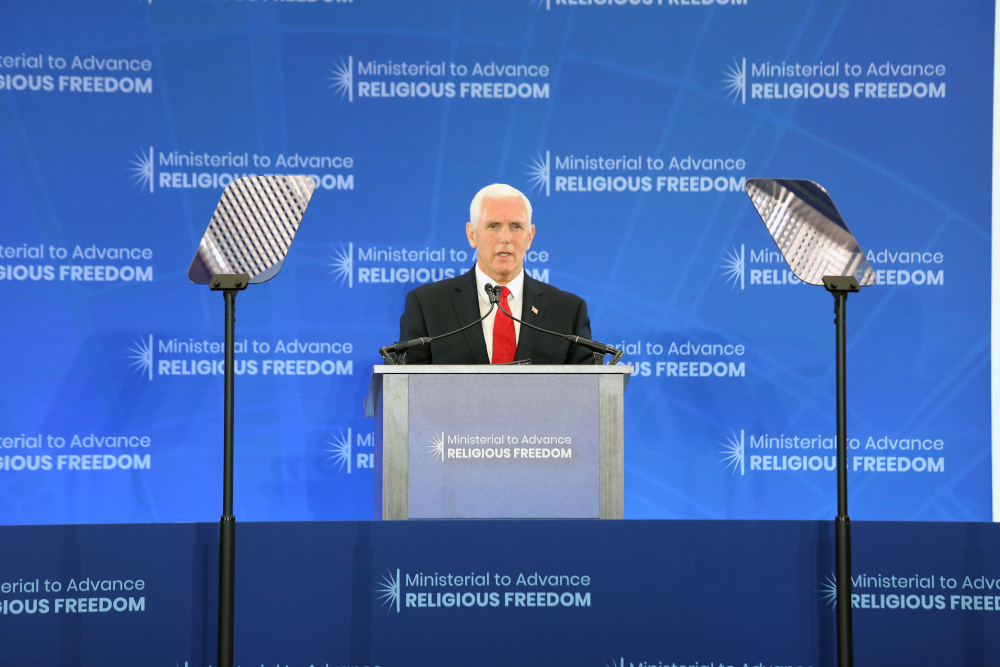 Vice President Mike Pence, speaking later in the day, announced that the U.S. had placed sanctions on two leaders of Iranian-backed militias, groups he said have "terrorized the people of the Nineveh Plain," a region of northern Iraq where religious minorities, including Christians and Yazidis, are persecuted.

"The United States stands with all victims of religious persecution and the American people have them in our hearts — and in our prayers," said Pence. 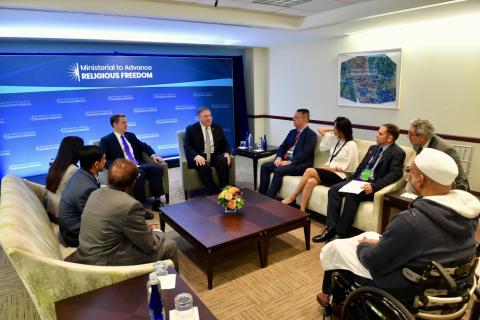 U.S. Secretary of State Mike Pompeo, center, participates in a pull- aside meeting with survivors of religious persecution during the Ministerial to Advance Religious Freedom at the U.S. Department of State in Washington, D.C., on July 18, 2019. (Michael Gross/State Department/Public Domain)

Earlier in the week, the administration placed designations on several military officials in Myanmar, preventing them from entering the United States due to what the State Department said was their involvement in the ethnic cleansing of Rohingya, a Muslim ethnic minority with some 700,000 members who have been forced into refugee camps in neighboring Bangladesh.

President Trump also met with a couple dozen survivors of religious violence in the Oval Office on Wednesday.

Over the course of the three days, speakers hailed religious freedom victories that had occurred since the first ministerial a year ago. That included the release of Pastor Andrew Brunson, an American evangelical detained in Turkey for two years.

During a Thursday luncheon for heads of delegations, he prayed for those gathered, saying, "I bless you in the name of my king, Jesus Christ."

Earlier in the week, summit attendees heard the story of Asia Bibi, a Pakistani Christian woman who was acquitted of blasphemy.

Many of the survivors of religious violence who spoke at the summit reminded attendees of those who remain persecuted for their faith across the world.

"I want you all to know that there are 200 more Asia Bibis in jail accused of the blasphemy law in Pakistan today," said Shaan Taseer, the son of a Pakistani governor who was killed for supporting Bibi and for urging eradication of  Pakistan’s blasphemy laws. "And these are only the reported cases." 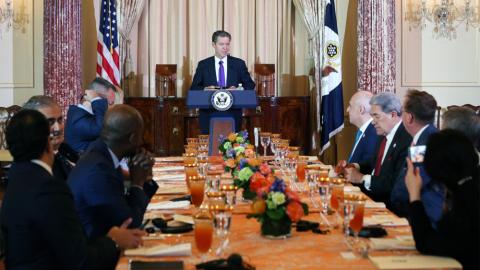 Taseer, who lives in Canada, asked Ambassador-at-Large for International Religious Freedom Sam Brownback, sitting in the front row during Taseer’s remarks, to bring up the plight of those jailed for blasphemy during the upcoming White House visit of Pakistan Prime Minister Imran Khan.

"We’ll take your message on up for the meeting with the president and prime minister this weekend," Brownback assured Taseer.

Critics have questioned whether the first ministerial, which issued a declaration and a plan of action addressing religious freedom, had accomplished much.

"Unless we are willing to speak out against human rights and violations of religious freedom in China, we lose all moral authority to talk about it any other place in the world," Pelosi said as she sat onstage with Wolf at a summit session.

Numerous speakers, from scholars to envoys of religious freedom to clergy, called for making legislative changes toward greater religious liberty. They also called for increased interfaith education and personal relationships across divides of faith.

"What purpose is served by human forays into outer space if we’re still incapable of understanding our fellow global citizens, our neighbors and even ourselves here on earth?" asked Shaykh Abdullah Bin Bayyah, president of the Abu Dhabi-based Forum for Promoting Peace in Muslim Societies. His remarks, spoken in Arabic, were translated by Sheikh Hamza Yusuf, co-founder of Zaytuna College in Berkeley, Calif.

Texas evangelical minister Bob Roberts, who took part in a Wednesday panel discussion with Rabbi David Saperstein, former U.S. international religious freedom ambassador, and Imam Mohamed Magid, a former president of the Islamic Society of North America, suggested ways Christians, Jews and Muslims could get to know each other in their local communities. He advocated for visiting each other’s houses of worship and dining in each other’s homes and later said summit participants seemed to be interested in replicating the ideas.

"I’ve got a pocket full of cards," he said in an interview, later that day, of the business cards he received just after he spoke from people from countries like India, Malaysia and Indonesia. "Declarations are nice. Laws are necessary. But without grassroots, it means nothing at all."

Several follow-up events focused on religious freedom were announced during the ministerial.

Callista Gingrich, U.S. ambassador to the Holy See, announced at a Wednesday reception that, as a result of the ministerial, there would be a joint symposium in Rome on Oct. 2 on the role of faith-based groups in protecting religious freedom, providing humanitarian aid and combating human trafficking.