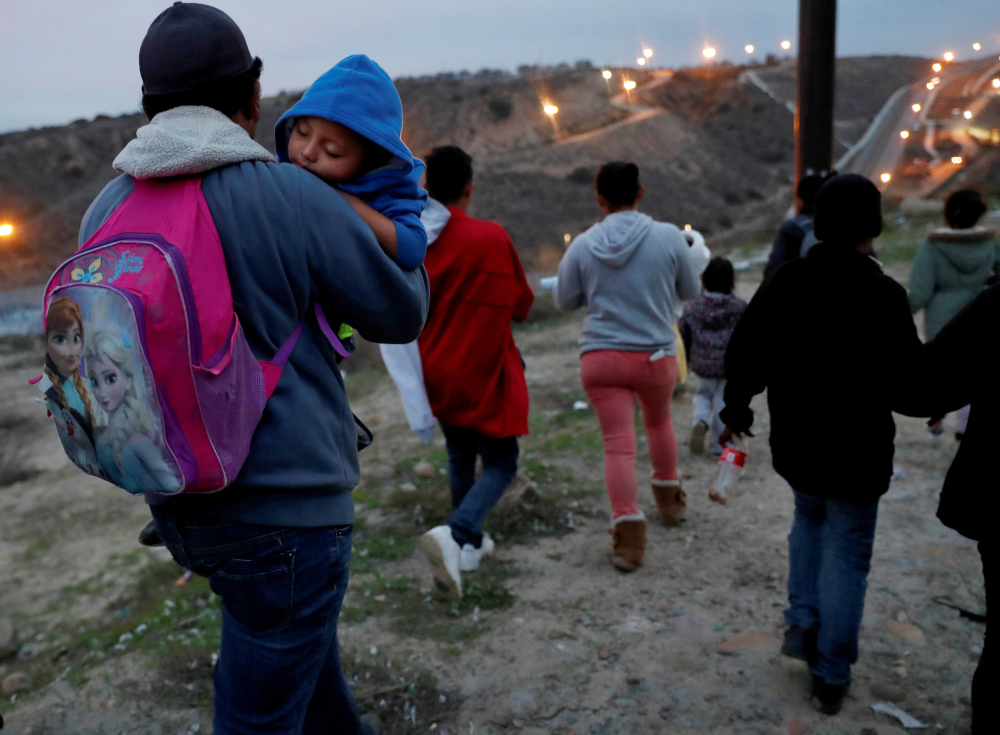 A migrant child sleeps while he is carried by a family member in 2018 as part of a caravan heading to the U.S. walks in Tijuana, Mexico, along the U.S.-Mexico border fence. (CNS photo/Leah Millis, Reuters)

A report published Jan. 17 says the number of immigrant children separated from their parents at the border last year is unknown and the number given out by government officials at the end of 2018, saying that 2,737 children were separated, is not accurate. The number may be much higher.

The separations officially reported were those that took place between July and November 2018, when then-U.S. Attorney General Jeff Sessions announced what he called a zero tolerance policy, which meant that undocumented migrant parents caught crossing the border with their children would risk being separated from them. After some lawsuits were filed and much public outcry, the policy was reversed.

Several Catholic bishops last year spoke out against the separations.

"Refugee children belong to their parents, not to the government or other institution. To steal children from their parents is a grave sin, immoral (and) evil," said San Antonio Archbishop Gustavo Garcia-Siller on June 14 via Twitter. "Their lives have already been extremely difficult. Why do we (the U.S.) torture them even more, treating them as criminals?" he continued.

Bishop Daniel E. Flores of the Diocese of Brownsville, Texas, also said via Twitter on May 31 that "separating immigrant parents and children as a supposed deterrent to immigration is a cruel and reprehensible policy. Children are not instruments of deterrence, they are children. A government that thinks any means is suitable to achieve an end cannot secure justice for anyone."

At the height of the separations in July 2018, Bishop Flores joined a group of top prelates who visited one of the detention centers where the minors were detained and the "respite center" for families who had recently crossed the border near the McAllen, Texas run by Catholic Charities of the Rio Grande Valley.

Catholic organizations such as the U.S. Conference of Catholic Bishops' Migration and Refugee Services and Catholic Charities USA helped reunite some of the families in the summer and fall of 2018. They were among the faith organizations that helped provide food, shelter and facilities to reunite the children with their parents once again.

The report says the real number of separations may exceed into the thousands, but it's hard to pin down accurate information because of a poor tracking system and poor communication among the agencies that were involved. The office took on the task of looking at the numbers of children separated, the inspector general report said, "given the potential impact of these actions on vulnerable children."

In October, the same office that issued the report said DHS, the department tasked with implementing the policy, "was not fully prepared to implement the administration's zero tolerance policy or to deal with some of its after-effects. Faced with resource limitations and other challenges, DHS regulated the number of asylum-seekers entering the country through ports of entry at the same time that it encouraged asylum-seekers to come to the ports. During zero tolerance, (U.S. Customs and Border Protection), also held alien children separated from their parents for extended periods in facilities intended solely for short-term detention."

The department "also struggled to identify, track, and reunify families separated under zero tolerance due to limitations with its information technology systems, including a lack of integration between systems," the Office of Inspector General said in October. "Finally, DHS provided inconsistent information to aliens who arrived with children during zero tolerance, which resulted in some parents not understanding that they would be separated from their children, and being unable to communicate with their children after separation."