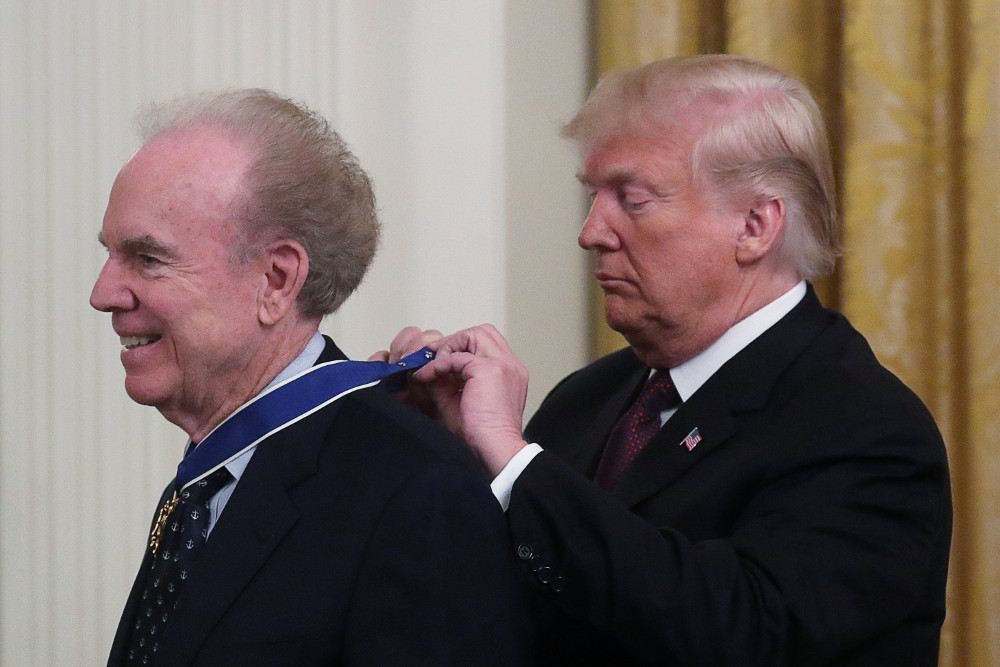 President Donald Trump presented the awards to five others as well Nov. 16.

Calling Scalia "one of the greatest jurists ever to serve our country," Trump said the one-time U.S. Supreme Court justice was admired for "his towering intellect, brilliant wit and fierce devotion" to the country's founding principles.

Scalia's widow, Maureen, received the award for her husband. The president also named the couple's nine children, and joked to her, saying, "Wow. I always knew I liked him."

"Justice Scalia transformed the American legal landscape, igniting a national movement to apply the original meaning of the Constitution as written," said the president, who has often invoked the jurist as a model justice. "Few have done more to uphold this nation's founding charter."

"Through nearly 900 written opinions and more than 30 years on the bench, Justice Scalia defended the American system of government and preserved the foundations of American freedom. Our whole nation is indeed indebted to Justice Scalia for his lifetime of noble and truly incredible service," Trump added.

Scalia died Feb. 13, 2016, at 79 of natural causes while on a hunting trip in Texas. The Senate confirmed him as an associate justice of the U.S. Supreme Court in September 1986. He had been the longest serving member of the current court when he died.

He repeatedly maintained in interviews that he always took his Catholic faith seriously but never allowed it to influence his work on the high court.

Staubach, a native of Cincinnati, won the Heisman Trophy as college football's best player in 1963 and became two-time Super Bowl champion with the Dallas Cowboys. Retiring from football after an 11-year career, Staubach went on to have a success in commercial real estate. He regularly is invited to speak to various audiences, including Catholic school students, about success in life and the importance of faith in his life.

Others receiving the Medal of Freed were retiring Sen. Orrin Hatch of Utah, who was first elected to his seat in 1976 and is the longest serving Republican senator; Miriam Adelson, physician and philanthropist, whose husband is casino magnate Sheldon Adelson; Alan Page, a defensive tackle for the Minnesota Vikings in the NFL who went on to become a Minnesota Supreme Court associate justice; baseball legend Babe Ruth, who also was Catholic; and rock 'n' roll star and heartthrob Elvis Presley.

The award recognizes people who have made an especially commendable contribution to the national interests of the U.S., world peace, cultural or other endeavor.