by NCR Staff
This article appears in the Immigration and the Church feature series. View the full series. 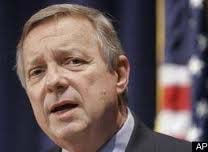 As the principal sponsor of the Dream Act in the United States Senate and as an embattled Catholic Democrat, I wanted to acknowledge the
extraordinary support which we have received from the Catholic Bishops on behalf of our efforts to give the young undocumented a path to legal status.

Though we fell short of the votes needed to pass the Dream Act in December, it was not for lack of commitment or effort by the Catholic Church and scores of other religious leaders and organizations.

Our day for justice will come if we indeed keep the faith and draw our strength from the courage of thousands of “Dreamers” across America.