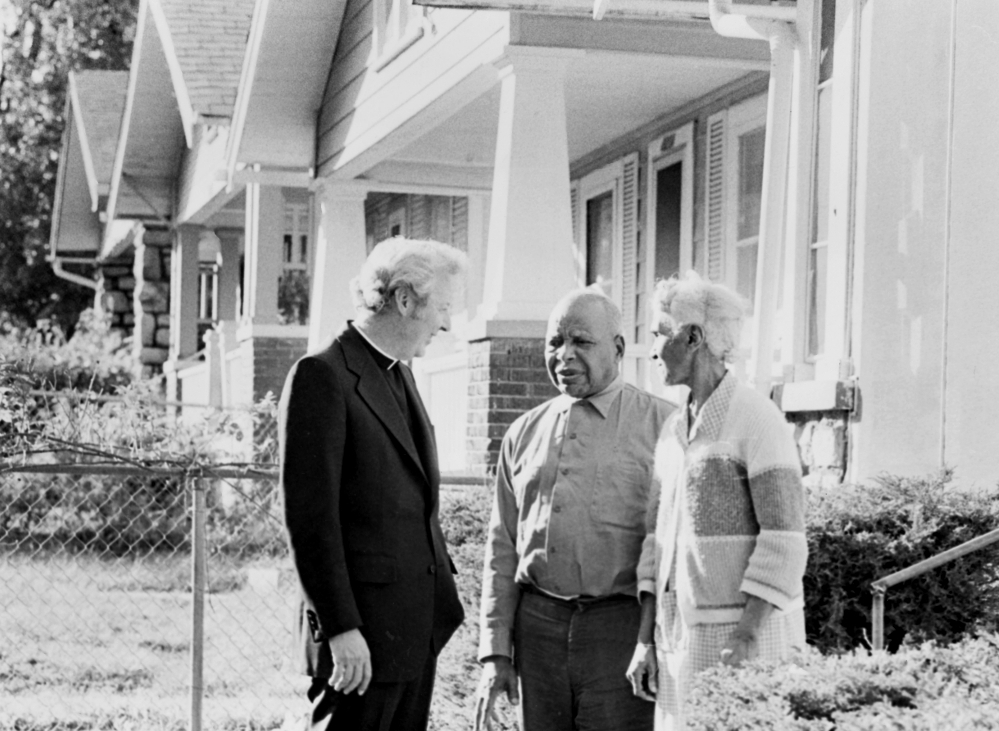 In 1977, Fr. Norm Rotert talks with Robert and Delia Harris, who were living in a home they got through the Blue Hills Homes Corporation, founded by Rotert in Kansas City, Missouri. (NCR photo/Bob Hart)

When I first met Fr. Norman Rotert in the early 1970s, he was pastor of an inner-city parish in Kansas City, Missouri, trying to imagine how to stabilize a neighborhood suffering from white flight and blockbusting.

I was a Kansas City Star reporter then, writing about those destructive urban dynamics, and Norm wanted to pick my brain a bit. I was glad, if a little surprised, that he was at least as interested in what was happening outside his church's walls as he was in what was happening inside them.

Out of those and other conversations came Norm's decision to commit to direct action through community organizing. He got personally involved by obtaining his own real estate license. Once he had that, he created the Blue Hills Homes Corporation (now Blue Hills Community Services), which bought up deteriorating properties, fixed them up and sold them to new owners able and willing to take care of them. That process happened hundreds and hundreds of times.

And that was just the start of Norm's outreach efforts to improve life for needy people. The list of his accomplishments is long, indeed.

Which is why, after Norm died in December 2014, some of his friends, including me, began to think about how to create a permanent way to honor him. After reviewing all the ways Norm had made Kansas City a more humane place, we decided to create a combination lecture-workshop series of events to inspire people — especially students — to get engaged in community development and to get training on how to do that.

Related: Funerals should celebrate life, but they should also retell the Gospel story

Our first such event will happen April 19 and 20 when we bring author and Columbia University research psychiatrist Dr. Mindy Fullilove to Kansas City. Drawing especially on her books Root Shock: How Tearing Up City Neighborhoods Hurts America, and What We Can Do About It and Urban Alchemy: Restoring Joy in America's Sorted-Out Cities, she will speak about urban dynamics and help a select group of students and neighborhood leaders understand better how cities decay and what can be done to help them thrive.

I think Norm Rotert would be delighted — not because it honors him but because it will help equip people to find effective ways to love hurting neighborhoods back to places of joy.

Sometimes in his long career, Norm wasn't tasked with supporting a parish in an in-trouble neighborhood but, rather, with assuring that a strong parish maintained its health by adapting to a changing future.

That's what he did in his last assignment, at Visitation Catholic Parish. This healthy congregation (and school) was nearing the 100th anniversary of its 1909 founding, and needed to assess where it was and, more importantly, where it was going.

Among the results were a marvelously reconstructed sanctuary, a new chapel, major renovations in the parish school, and programmatic changes that infused energy into the congregation. The congregation celebrated its centennial with a book I was asked to write about its history, Visitation: A Century of Faith.

One reason I wanted to tell you about Norm is that I often think of him now as an antidote when I hear about divisions and problems in the Catholic Church — whether it's the sexual abuse scandal or harsh criticisms of Pope Francis.

Norm was a peacemaker, a leader comfortable in his own skin, a priest profoundly shaped by the Second Vatican Council, especially its 1965 document Gaudium et Spes, which begins, "The joys and the hopes, the griefs and the anxieties of the men of this age, especially those who are poor or in any way afflicted, these are the joys and hopes, the griefs and anxieties of the followers of Christ."

As Norm often said, "Those words have given direction to my life as a priest. I have tried to walk with people I have been called to serve."

I'm honored to help honor Norm now. But we all know other priests today like Norm. Please find a way to encourage them and honor their ministry now, before they're gone.

[Bill Tammeus, a Presbyterian elder and award-winning former Faith columnist for The Kansas City Star, writes the daily Faith Matters blog for the Star's website and a column for The Presbyterian Outlook. His latest book is The Value of Doubt: Why Unanswered Questions, Not Unquestioned Answers, Build Faith. E-mail him at wtammeus@gmail.com.]

A version of this story appeared in the April 6-19, 2018 print issue under the headline: Norm's legacy inspires community action.