Biographies are one way to delve into stories of spiritual life 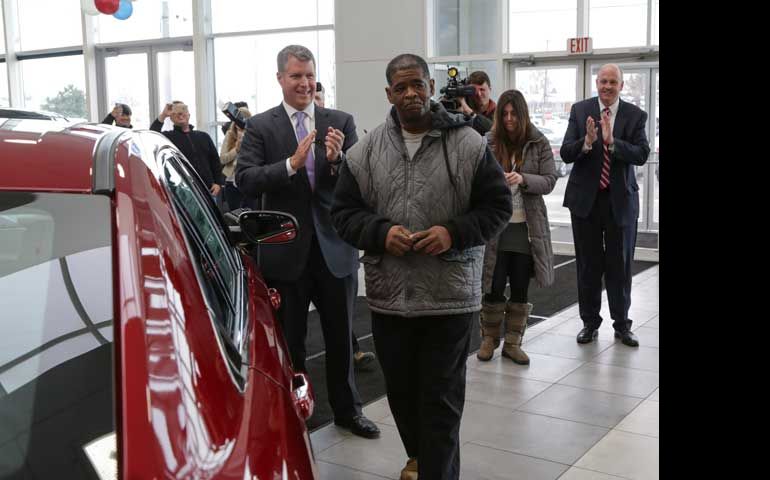 Did you hear about the story of James Robertson? He's the 56-year-old Detroit man who walked 21 miles roundtrip to his suburban factory job, because he makes only $10.55 an hour and was unable to purchase a car after his broke down a decade ago. In February, a college student who learned about Robertson's plight started an online fundraising campaign, which raised $350,000, plus a new red Ford Taurus for him.

Stories like these renew my faith in humanity, but they also cause me to wonder why the same folks who might vote to cut funding to public transportation, which would have at least shortened Robertson's commute, will quickly open their wallets to buy him a car.

Such is the power of stories. Humans are hardwired to tell stories and to respond to the stories of others. Communication theorist Walter Fisher, who taught at the University of Southern California, argued that storytelling is the oldest and most universal form of communication -- and among the most persuasive types, too, which is why politicians and advertisers often use stories to sell things.

Perhaps because I am in the process of writing a biography, I'm realizing how fascinating it can be to immerse yourself in another person's story, especially into his or her spiritual life. What makes her tick? What were her early influences? How did a seemingly random turn in her life end up being life-changing?

But you don't have to write a biography to delve into someone's story. Documentary films, podcasts ("Serial," anyone?), and magazine articles are among the many media where I can experience the stories of people who challenge, inspire and sometimes just confound me.

Of course, my favorite medium is books. This Lent, I'm going to add some biographies and memoirs to my spiritual reading list.

Whose stories to read? For many Catholics, their first biographies were stories of officially canonized saints, whether St. Patrick or St. Clare of Assisi. Today, a number of Catholic publishers still produce saints' biographies for kids; some of the best are from the Daughters of St. Paul.

For adults, there are the classic stories of saints' lives, such as Augustine's Confessions, as well as some contemporary classics-in-the-making, such as Jon Sweeney's When Saint Francis Saved the Church: How a Converted Medieval Troubadour Created a Spiritual Vision for the Ages (2014).

But don't forget the women. Perhaps one of the most popular saint's autobiographies is Thérèse of Lisieux's Story of a Soul. I'm also interested in learning more about the lives of Catholic women mystics, such as Julian of Norwich, Hildegard of Bingen, and Mechtild of Magdeburg.

Those interested in the lives of church leaders will not have a hard time finding biographies of clergy, bishops, and popes, including the current one. The new "People of God" series from Liturgical Press includes brief, accessible biographies like John XXIII: The Medicine of Mercy by Massimo Faggioli, Oscar Romero: Love Must Win Out by Kevin Clarke, and Francis: Bishop of Rome by Michael Collins. (Disclosure: I have a professional connection with this publisher.)

But it would be a loss to limit your biography, autobiography or memoir reading to officially canonized saints or church leaders. On my "to-read" list, for example, are some books about the four churchwomen murdered in El Salvador. They include Ita Ford: Missionary Martyr by NCR contributor Phyllis Zagano (1996), and Salvador Witness: The Life and Calling of Jean Donovan by Ana Carrigan (2005).

Other recent spiritual biographies and autobiographies have already become classics, such as C.S. Lewis' Surprised by Joy (1955) or Dorothy Day's The Long Loneliness (1952). I'd also put Kathleen Norris' Dakota: A Spiritual Geography (1993) and Karen Armstrong's The Spiral Staircase: My Climb Out of Darkness (2004) in the contemporary classics category.

To be honest, my taste tends toward contemporary stories because the connections to my own life are easier to make. In fact, a whole new genre of memoirs has sprung up, in which writers share the messiness of their relationships with institutional religion. I'm thinking of Anne Lamott's classic Traveling Mercies: Some Thoughts on Faith (1999), for example. More recently, Nadia Bolz-Weber, the unconventional (to say the least) tattooed Lutheran pastor, tells her story in Pastrix: The Cranky, Beautiful Faith of a Sinner & Saint (2013).

Not every "once upon a time" ends neatly with "happily ever after," of course. However, those stories that delve deeply into human darkness can be the most insightful. After the recent death of New York Times journalist David Carr, I listened to an old interview with him about his 2008 memoir of addiction, The Night of the Gun, subtitled, "A reporter investigates the darkest story of his life. His own." Sounds like a good Lenten read to me.

[Heidi Schlumpf teaches communication at Aurora University outside Chicago. She is the author of While We Wait: Spiritual and Practice Advice for Those Trying to Adopt (ACTA).]

Backlash is not welcome; let comedians push, be funny