Early Christmas decorating reminds us God is always near 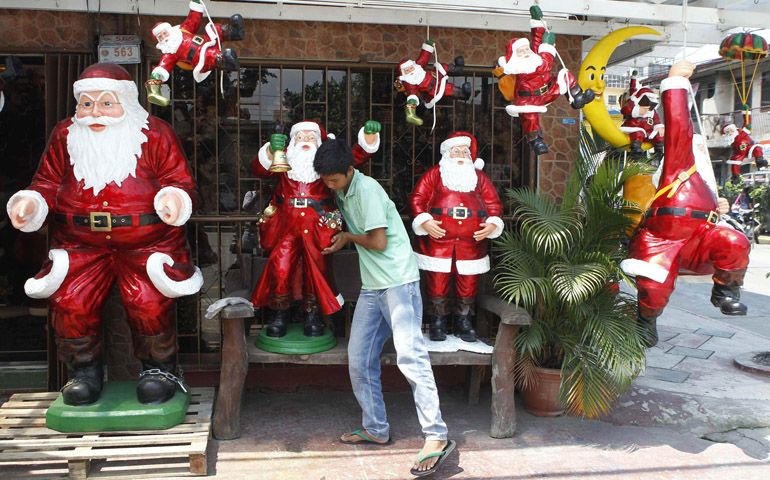 A worker arranges a Santa Claus statue along a main street of Manila in 2011. Christmas season begins as early as September in the predominantly Catholic country. (CNS/Reuters/Romeo Ranoco)

I'm one of those folks who cringes when Christmas paraphernalia enters stores the day after Halloween. I add my voice to the chorus of people who say retailers are pulling out the Christmas stuff earlier and earlier in an effort to make a buck. I make the same noises about this being a violation of the true Christmas spirit, and not what the holiday is meant to be.

Lately, though, I've been noticing another trend: People putting up their own Christmas decorations as soon as possible. An apartment across the street from me has had Christmas lights festooned across the balcony since mid-November. On social media, people started tweeting about putting up the tree and sharing photos of holiday decorations on Facebook right after Thanksgiving. It was as if they were all braced in starting blocks, tinsel clutched, just waiting for the last fork to fall at the Thanksgiving dinner table. One of those early decorators that I know proudly refers to herself as a "holidork."

I don't know if this is exactly a new trend or if I'm just noticing it more. With social media, people are a lot more open about their day-to-day activities, so it might just be that I'm getting glimpses into the lives of others I wouldn't have had previously. But I suspect this early decorating is on the increase. And, unlike those cash-grabby retailers, it's not about money.

From its early beginnings, Christmas has been about light coming into a dark, dreary world. For Christians, it celebrates God taking human form and walking among us as the Christ, spreading love, acceptance and peace. Most cultures and religious traditions have found some way to mark the mid-winter transition from darkness to light. There's something about our human incarnation that makes our spirits crave signs that there will be an end to darkness. It's at work in us at a deep, spiritual level.

I think this is what might be at the bottom of all this early decorating. We live in a rather dark world of economic uncertainty, violent political unrest and war. Individually, many are dealing with unemployment, work stress, longer hours, fractious families and a lot of deep-seated fear of the unknown.

It's no wonder we want to pull out the lights and holly a little early. We all need some kind of balm for our troubled souls. And what better balm than marking the birth of Jesus?

Here's the thing, though: By placing all this emphasis on God coming into the world at Christmas, we might be missing the point. God's not only around at Christmas; Jesus came to remind us that the Divine is with us always, present to us in this very moment. And this one. And this one. There's never a nanosecond when God isn't near, just waiting for us to look up and say "Oh! Hi! I didn't see you there!" (I, personally, think God lives for these moments.)

I'd like to go one step further and suggest that God loves decorating, too. The Divine is the original Martha Stewart, though without all the emphasis on perfection and the right pickle forks. Look at the foamy crest of a wave hitting the beach and tell me that's not God decking the halls. Every hint of birdsong is a carol. And don't get me started on flowers, fall foliage and the hum of bees. These are God's decorations. And they're up all year. Try doing that with Christmas lights; trust me, your neighbors will complain.

I've been making a point of noticing all these beautiful decorations God has set out in the world. When I do, I find my anxiety and worries fade a bit, and my heart eases. I call them my "Emmanuel" moments; they're signs God's with me, even when it's cold outside and the sun goes down far earlier than I'd like it to. My soul jumps a little, rejoicing. Things get still. My day gets a little brighter.

What's more, I don't have to wait until after Thanksgiving to remind myself that God is near.

[Kevin Aschenbrenner is a writer, poet and master's student in the Sophia program at Holy Names University in Oakland, Calif. Find more of his work at wordsintheworld.com.]

Commentary | Early Christmas decorating reminds us God is always near

Your thoughts on Archbishop Gomez and pseudo-religions