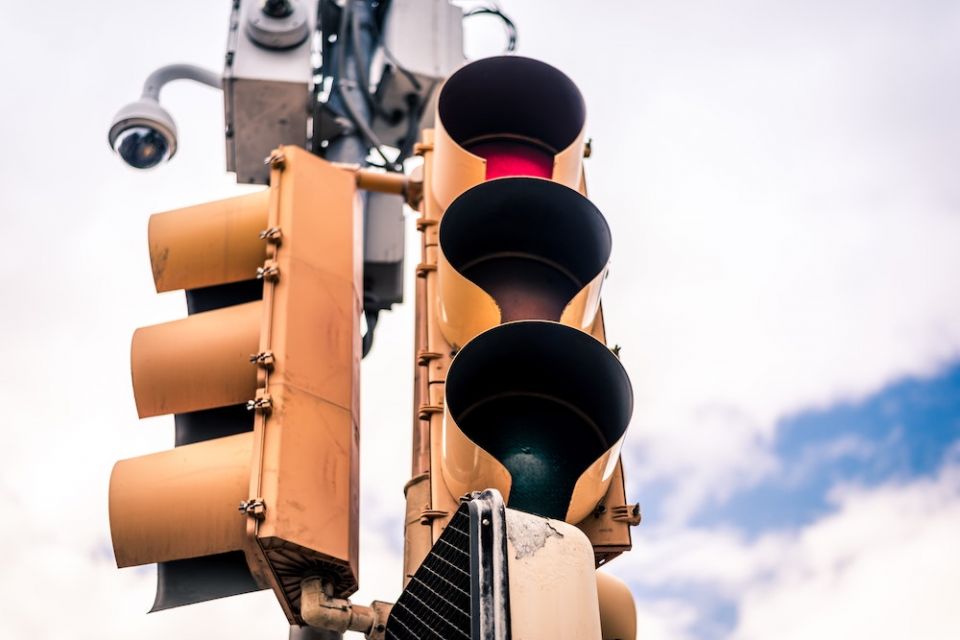 A "Franciscan Traffic Light" paradigm, with a green light — "go" — yellow light — "use caution" — and red light — "stop" — can be helpful when approaching social media engagement and navigating the internet. (Unsplash/Mona Jain)

The recent news of Facebook's "Oversight Board" ruling on the matter of whether or not Donald Trump can or ought to be indefinitely banned from the social media platform has focused attention once again on the tensions present in the balancing of the principle of free expression, the definition of appropriate decorum, and a host of other issues related to navigating the novel world of the internet. While the former president was the immediate focus and subject of the decision last week, the fundamental issues beneath this discrete case raise general questions for all of us.

One such question that has been on my mind is how should Christians engage with the internet generally and social media platforms specifically?

Over the years, I have been asked to reflect on this question and offer my perspective informed by my work as a theologian, my identity as a religious priest, and my experience as someone who — for better and worse — has regularly engaged with social media. What I have found myself coming back to is the wisdom of the 800-year-old Franciscan spiritual tradition, which has some robust and surprising insights for our 21st century context.

I have taken to referring to these insights as a "Franciscan Traffic Light" paradigm, which simultaneously features a green light ("go"), yellow light ("use caution") and red light ("stop") for approaching social media engagement and navigating the internet.

The green light refers to the belief that the Franciscan tradition, with its emphasis on itinerancy, mission and meeting people wherever they are, naturally encourages Christians to go beyond the traditional confines and comforts of social engagement. I think often of something Pope Benedict XVI said in 2009 when he was bishop of Rome and spoke on the occasion of the "43rd World Communications Day." Addressing young people in particular, he concluded his remarks, saying:

I ask you to introduce into the culture of this new environment of communications and information technology the values on which you have built your lives. In the early life of the Church, the great Apostles and their disciples brought the Good News of Jesus to the Greek and Roman world. Just as, at that time, a fruitful evangelization required that careful attention be given to understanding the culture and customs of those pagan peoples so that the truth of the gospel would touch their hearts and minds, so also today, the proclamation of Christ in the world of new technologies requires a profound knowledge of this world if the technologies are to serve our mission adequately. It falls, in particular, to young people, who have an almost spontaneous affinity for the new means of communication, to take on the responsibility for the evangelization of this "digital continent." Be sure to announce the Gospel to your contemporaries with enthusiasm. You know their fears and their hopes, their aspirations and their disappointments: the greatest gift you can give to them is to share with them the "Good News" of a God who became man, who suffered, died and rose again to save all people.

The complicated history of the church's missiological complicity in European colonization notwithstanding, the general sentiment contained in the analogy of the internet as a kind of "digital continent" in need of the "Good News" of the Gospel proclamation rings true.

To this end, the Franciscan spirit of meeting people where they are — from the rural countryside to the city center — applies to the internet insofar as we recognize that this "digital continent" is where millions of women and men spend a large portion of their lives. Christians committed to the evangelical call to preach the Gospel by word and deed cannot shy away from engaging with new technologies and social media platforms. The good news of Jesus Christ ought to be proclaimed by our presence in all places people are found, including virtual places.

The yellow light of caution emerges when one considers the instructions St. Francis of Assisi left for those inspired by his way of Christian living. For example, in the "Canticle of the Creatures," Francis reminds us that authentic human behavior is best characterized by those who "give pardon," "bear infirmity and tribulation" and "endure in peace."

And in his Rule for the Franciscan life, he tells the friars, "I counsel, admonish and exhort my brothers in the Lord Jesus Christ not to quarrel or argue or judge others when they go about in the world; but let them be meek, peaceful, modest, gentle and humble, speaking courteously to everyone, as is becoming."

The takeaway here is cautionary in that the Franciscan tradition encourages us to be reflective and discerning in the way we engage with one another. With the rapidity of technological communication and instantaneousness of social media, it can be easy to be swept up in arguments, disputes and unchristian behavior. But the Franciscan tradition, while offering reasons for fully engaging with the "digital continent," also exhorts us to slow down and engage in a particular way modeled after the Gospel.

I know that at times I struggle with this myself. As with all people, fallible human nature, mental or emotional exhaustion, and the immediacy of the digital world can occasionally lead me to make imprudent decisions or post a remark online that does not rise to the vision of dialogue Francis encouraged in the light of the Gospel.

The wisdom of the Franciscan tradition here encourages us to slow down a little, be more thoughtful and navigate the "digital continent" more in keeping with our Christian vocation. Like all aspects of Christian life, this is a continual process of ongoing conversion.

Finally, the red light that the Franciscan tradition offers us has to do with remembering the importance and goodness of our creaturely embodiment. There can be a way in which the ubiquity of the internet in our lives might lead us to unwittingly diminish the importance and goodness of our full humanity. As Pew Research Center recently noted, nearly 31% of U.S. adults say they are "almost constantly online."

As such, we can easily lose sight of the sacramental nature of human existence, God's presence in and through the created world, and the very goodness of our physicality. Certainly, the pandemic — in many cases, out of necessity — has only increased the percentage of our lives lived online and mediated through technological devices. Without adequate awareness and reflection, we run the risk of succumbing to a new form of the ancient heresy known generally as "Gnosticism," something Pope Francis warned about in Gaudete et Exsultate, his 2018 apostolic exhortation on holiness.

The Franciscan spiritual tradition reminds us that our embodiment and physicality is inherently good, which is affirmed most notably by the incarnation of the eternal word in Jesus Christ and is the most central tenet of our faith tradition. Therefore, how we think about and approach our technological engagement and internet usage ought to take into consideration such spiritual and ideological pitfalls.

Even if you are not spewing vitriol online as an anonymous troll or fomenting violence as Trump did, all of us can use a reminder of what it means to be more consistently Christian in both our analog and digital lives. In reflecting on how to navigate the "digital continent," perhaps the "Franciscan Traffic Light" paradigm may offer us useful guidance in how we conduct ourselves online.

A version of this story appeared in the June 25-July 8 print issue under the headline: Franciscan spiritual wisdom to navigate the 'digital continent' .