Methodists postpone debate of gay issues that could split denomination 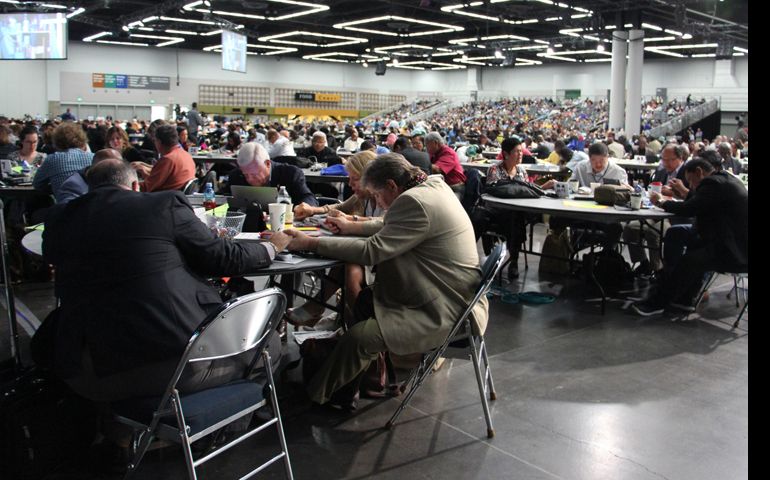 Delegates at the United Methodist Church General Conference in Portland, Ore., spent time in prayer on May 17, 2016 after Bishop Bruce Ough addressed rumors the denomination's Council of Bishops was considering a proposal to split the church. (RNS/Emily McFarlan Miller)
This article appears in the United Methodist General Conference 2016 feature series. View the full series.

Portland, Ore. — Amid protest, song and fears of a denominational breakup, United Methodists at their quadrennial General Conference decided yet again not to decide anything regarding LGBT rights.

But in a groundbreaking move, the delegates from the U.S. and abroad voted 428-405 on May 18 to allow the church's Council of Bishops to appoint a commission to discuss whether to accept same-sex marriage or ordain LGBT clergy.

The bishops said they want the commission to "develop a complete examination and possible revision of every paragraph in our Book of Discipline regarding human sexuality."

"We continue to hear from many people on the debate over sexuality that our current discipline contains language which is contradictory, unnecessarily hurtful, and inadequate for the variety of local, regional and global contexts," the bishops' recommendation added.

It was a compromise to an issue that has vexed the decision-making body of America's second-largest Protestant denomination, outnumbered only by the Southern Baptist Convention, at every quadrennial meeting since the UMC first deemed homosexuality "incompatible with Christian teaching" in 1972.

But it's not clear whether the commission will present findings before the next General Conference planned in 2020.

Pressure to make the United Methodist Church a more LGBT-friendly church has increased in the U.S. since the Supreme Court's decision last year to legalize same-sex marriage. Just before the conference started last week, 111 United Methodist clergy came out as LGBT, and earlier this week, an additional 1,500 clergy expressed support for their colleagues.

But disenchantment among conservatives with the growing support for same-sex marriage also was evident at the Methodist meeting.

"I think we keep wrestling with this just like the American public keeps wrestling with it," said prominent United Methodist pastor and author the Rev. Adam Hamilton, whose original motion on the bishops' recommendations was voted down.

He said the compromise reflected the difficulty of maintaining unity in a broad-based church.

"In America, we're divided as a nation. The United Methodist Church in so many ways represents that broad spectrum of American people. We are Christians who are some on the left, some on the right, and a large number of us are on what we call the extreme center or the radical center."

The United Methodist Church has some 12 million members worldwide, including more than 7 million in the U.S., and is experiencing its greatest growth in places, particularly Africa, where homosexuality is illegal in some countries.

The conference had been set to discuss legislation regarding human sexuality on Wednesday, amid growing tension and demonstrations over the church's positions denying ordination to LGBT clergy and marriage to same-sex couples.

More than 160 demonstrators had greeted delegates that day with a silent protest lining the sidewalk outside the Oregon Convention Center. Some held signs saying "It's Time" and "Why exclude us?" and "Self-avowed practicing queer clergy"; others, wooden crosses draped in stoles representing LGBT people in ministry.

On Tuesday, Council of Bishops President Bruce Ough had demurred on rumors bishops would call for a special session of the General Conference in two years to consider a split in the denomination over the issue. Delegates then tasked him with meeting with his fellow bishops and bringing back direction on how to move forward on issues related to human sexuality.

The bishops' recommendations don't name a split, "but it ought to be the goal," said Dorothee Benz, a New York delegate and national representative of Methodists In New Directions.

The LGBT activist said she's skeptical about the commission but glad legislation that would have strengthened action against LGBT or affirming clergy also has been shelved in the meantime. The most important thing to understand about those recommendations, Benz said, is that they came as "a product of unrelenting pressure that we as activists have put on the church by refusing our compliance and complicity in discrimination."

Wednesday was the ninth day of a conference that has felt like a roller coaster ride, dogged by protests and mired in parliament-like proceedings. With two days left, votes went back and forth.

Hamilton's motion -- which turned the bishops' recommendations into three concrete actions -- first was voted down. Afterward, Baltimore-Washington delegate Jen Ihlo called for Bishop Bill McAlilly, presiding over the afternoon session, to step down after he had, she said, "single-handedly undone everything that was done this morning."

Ihlo, who had supported the motion, said she felt the bishop had confused the body. Another delegate accused the bishop of sending hand signals telling people how to vote.

After a brief recess -- during which many African delegates burst into song, asking God for help -- it was determined McAlilly could continue.

The so-called Hamilton motion differed only slightly from the motion to adopt the bishops' recommendations without spelling them out that eventually was approved by just 23 votes. Namely, those recommendations had not finalized plans for a special session, only noting it supported processes to help the church heal "up to and including the possibility of a called General Conference in 2018 or 2019."

Hamilton -- who had written a plan called "A Way Forward" that would have allowed regional bodies to make decisions on LGBT inclusion -- had called the recommendations "our best chance of finding a long-term solution that may result in a division; hopefully, it will result in unity." A smaller group of United Methodists from all sides of the issues and parts of the world might better be able to accomplish that than 864 delegates, he said.

Ihlo said she thinks it's that "worldwide nature of the church" that keeps issues of LGBT inclusion coming back every four years to the General Conference. African delegates "have a different culture and a different view of homosexuality than we do in the United States, and we can't find a way to move forward," she said.

"I'm not asking them to believe something they don't believe but I'm also asking them to not force their interpretation of the Bible on me," she said.

The Rev. Forbes Matonga of West Zimbabwe, who during debate had called on the conference to make a decision and move on, noted as Hamilton had that many Americans also have scriptural or theological problems with homosexuality.

"In Africa, definitely it is not a big issue," Matonga said. "It only becomes a big issue because we know there are efforts by those who are from the extreme left to come and influence Africa to appear as if it is a human race issue rather than a U.S. issue.

"We also refuse to regionalize this problem in the church. If we are truly one body, if we are truly a global church, this is one issue that I don't think is cultural. Human sexuality is not cultural."

African Methodists worry about the church that brought them Christianity

Methodists vote to cut ties with group some consider anti-Israel

The core message of the Gospel is that God loves us

New gifts from the Spirit