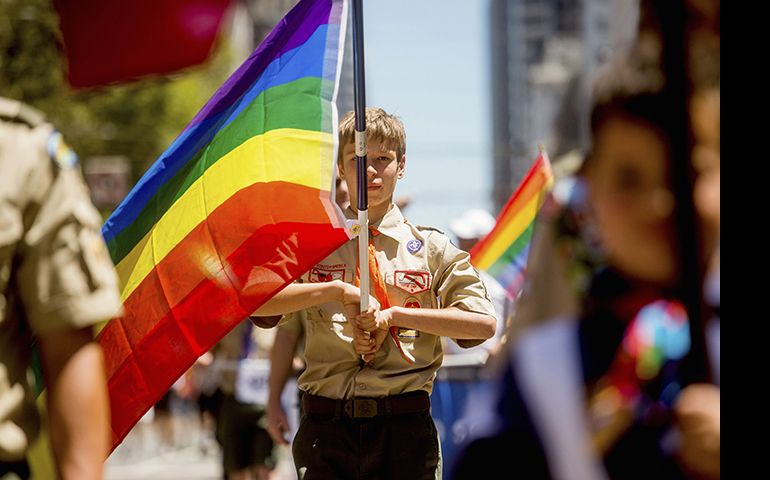 Salt Lake City — The Boy Scouts of America isn’t going to lose its largest sponsor after all.

The LDS Church announced Aug. 26,  that the Utah-based faith will stick with the Scouts after threatening last month to bolt from the youth group and form its own international organization for boys.

“At this time, The Church of Jesus Christ of Latter-day Saints will go forward as a chartering organization of BSA, and as in the past, will appoint Scout leaders and volunteers who uphold and exemplify church doctrine, values and standards,” the church’s governing First Presidency of Quorum of the Twelve Apostles said in a news release.

After the Scouts voted to accept openly gay leaders last month, the LDS Church said it “considering creating its own international program for boys, separate from the Boy Scouts of America.”

That could have had dire financial consequences for BSA. The LDS Church is far and away the nation’s largest Scouting sponsor, serving 437,160 boys in 37,933 troops.

In 2013, more than a third (37 percent) of troops were LDS sponsored, accounting for 18 percent of the BSA’s 2.4 million total membership (Mormon troops, while more numerous, tend to be smaller in size).

An LDS Church withdrawal also could have decimated the three Scout councils in Utah, which report between 96 percent and 99 percent of their members are in Mormon units.

Although the LDS Church allows openly gay Mormons to serve in church assignments, including the Boy Scouts, these members are deemed to be living the faith’s standards. This means they are not acting on their same-sex attractions.

The BSA’s new policy, however, makes no such distinction between “openly gay” and “sexually active gay leaders.” So a gay Scout leader could have a partner or a same-sex spouse — and that troubled the Mormon brass.

While the BSA insists that religiously affiliated troops, including those sponsored by the LDS Church, can continue to ban gay leaders, many observers doubt such an exemption can be legally defended.

Even so, Mormon leaders are counting on the exemption.

“In the resolution adopted on July 27, 2015, and in subsequent verbal assurances to us, BSA has reiterated that it expects those who sponsor Scouting units (such as the church) to appoint Scout leaders according to their religious and moral values ‘in word and deed and who will best inculcate the organization’s values through the Scouting program,’ ” said Wednesday’s LDS statement.

Mormon leaders went on to praise the Scouts and their longtime influence in young lives.

The LDS Church “appreciates the positive contributions Scouting has made over the years to thousands of its young men and boys and to thousands of other youth,” the statement said. “As leaders of the church, we want the Boy Scouts of America to succeed in its historic mission to instill leadership skills and high moral standards in youth of all faiths and circumstances, thereby equipping them for greater success in life and valuable service to their country.”