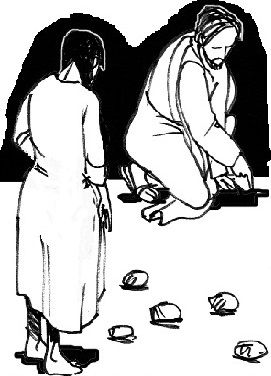 Commentaries on the story of the woman caught in adultery suggest that it could have occurred during the feast of Tabernacles, when Jewish families lived outside in small huts or tents to commemorate the Exodus and passage through the desert. Close public contact between families in that setting could have occasioned a liaison between the guilty couple. Another conjecture is that John 8 repeats the story in the Book of Daniel when Susanna was accused of adultery by two lustful elders, but is saved by the boy Daniel.

The timing of the couple’s exposure and the capture of only the woman suggests a carefully orchestrated plot by the scribes and Pharisees to compromise Jesus by forcing him to choose between the Law of Moses and his own public message of mercy. But the religious leaders are instead exposed for their hardness of heart in using the woman to catch Jesus with no regard for her humiliation and suffering. Jesus confronts them and the eager crowd with his challenge: “Let the one among you who is without sin cast the first stone.”  The whole scene is filled with irony and calculated cruelty, and Jesus’ refusal to sanction a public execution brings everyone in the crowd to shame.

As they retreat, Jesus is left alone with the terrified woman. He gives her both compassion and justice by telling her to go free and not to sin again.

The question the incident poses for us all is this: What kind of heart do you have?  If it is a heart of stone, you will be ready to judge, condemn and punish others you deem unworthy of your high standards. But if you have a heart made of flesh and know that you, too, are subject to weakness and sin, you can only have compassion on others.

It is a hard lesson to learn. The woman escapes with her life, but the confrontation is really a rehearsal for another execution that will go forward when the religious establishment hands Jesus over to be crucified. His message of God’s mercy will merit death under the crushing weight of the stone tablets of the Law.

Women play a key role in supporting Jesus as he goes to his death.  He is abandoned as the arrest and accusations mount against him, but the women remain faithful and become the first witnesses to his resurrection. Every victim of discrimination and suffering becomes the foundation of the Gospel’s affirmation that the last will be first and the first last.

We pause on this Fifth Sunday of Lent to examine our hearts. In the coming weeks we see the whole story of Jesus compressed into a choice between life and death, love and fear, mercy and punishment.  How we discern the path ahead will decide our readiness to grasp the meaning of Easter.

Called to the desert

As we enter Lent, it is time to scrutinize our lives