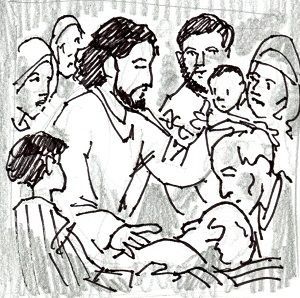 "The people scurried about the surrounding country and brought the sick to wherever they heard Jesus was" (Mark 6:55).

The holiness of God is emphasized throughout the scriptures, evident in today’s story in 1 Kings 8 about bringing the Ark of the Covenant to Jerusalem. The focal point of the presence of God is a gold box topped by two angels, their wings spread out to cover it and its contents, the two stone tablets of the Law given to Moses at Sinai.

The Ark had accompanied the People during their wandering in the desert and had been housed in a tent. Now that the kingdom was established, Solomon was building a magnificent temple for the Ark. Because God is ineffable and the divine name inexpressible, the divine presence is experienced as a dark cloud that fills the temple’s sanctuary and  inner chamber called the Holy of Holies.

An even greater mystery for Christians is the belief that God was present in the person of Jesus. The Incarnation-- God's Word made flesh and dwelling among us -- is the central claim of Christianity, and it goes infinitely beyond the core tenets of Judaism and Islam, the other religions of the Book. It would take generations and several centuries for the church to find any formula to begin to express how God and Jesus are one, but without this belief, the Christian faith collapses.

Pope Francis has described our faith as an encounter. Without meeting God in Jesus in our most intimate consciousness and in our neighbor, no amount of theology will draw us into this mystery. In today's Gospel we see how accessible Jesus was in his humanity and how transparent his holiness was in his ministry.  The crowds brought their sick to him, hoping just to touch his clothing, for power was flowing out of him and restoring everyone who came close to him.

We, too, are meant to encounter Jesus and to "touch" God in him both in prayer and in our care for one another. If we deny the Incarnation, we divide reality into physical and spiritual realms that never touch, with a distant God on one side and our human frailty and mortality on the other. Or we can bridge the two in the person of Jesus, truly divine and truly human. He then becomes our point of contact and path to life with God.

Even if we cannot understand this mystery, faith moves us to seek God in our relationships and daily experiences.  The Word we read each day is a living voice and another way we access the Real Presence.   To be in touch with Jesus is the source of all holiness and our way to bring God’s touch to those we serve and minister to.

To nurture unity, bring back the Angelus

Out on a limb