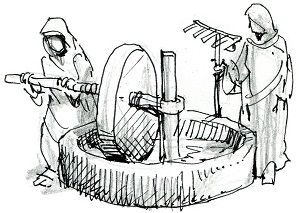 Prophets must sometimes shock us before we will listen. The global climate change crisis got a dramatic wake-up call when 16-year-old Swedish activist Greta Thunberg addressed a United Nations climate conference in New York last September:

You all come to us young people for hope. How dare you! You have stolen my dreams and my childhood with your empty words. And yet I'm one of the lucky ones. People are suffering. People are dying. Entire ecosystems are collapsing. We are in the beginning of a mass extinction, and all you can talk about is money and fairy tales of eternal economic growth. How dare you!

Today’s readings for the First Sunday of Advent contain some of most powerful appeals in the Scriptures to respond to God’s invitation to conversion in order to avert disaster.  Etched onto the walls of the United Nations are the words from Isaiah calling for an end to war: “They shall beat their swords into plowshares and their spears into pruning hooks; one national shall not raise the sword against another, nor shall they train for war again." This cry for peace, issued three millennia ago, has yet to be heeded and continues to be ignored in our enlightened post-atomic bomb era of technological terror.

Pope Francis’ comprehensive letter on climate change, “Laudato Si”, was issued four years ago and, despite urgent warning from the scientific community, even signatories to the Paris Climate Accord are not on track to meet carbon goals, while the United States has withdrawn its support.  The pope’s recent call in Hiroshima for banning the possession and use of nuclear weapons as critical to saving the planet, for all practical purposes, fell on deaf ears.

St. Paul warned disciples of the imminent return of Jesus and final judgment when he wrote to the church at Rome: “You know the time; it’s the hour now for you to wake from sleep.” Matthew recorded Jesus’ many warnings and parables about vigilance when composing his Gospel in the wake of the destruction of Jerusalem and the temple in 70 CE, a disaster no one thought could happen.

Jesus foresaw the coming calamity when he wept over the holy city before his passion and death. Matthew quotes him as using descriptions of the siege and fall of Judah six centuries before, when thousands of people died of starvation or by the sword as Babylon destroyed Jerusalem and herded its survivors as slaves into exile. Terror would strike without warning, taking some and leaving others with a randomness no one could prepare for once the tipping point had been reached.

The Advent liturgy invites us into a season of expectation with a sober, even shocking, reminder that God’s Plan is not going to be imposed or realized without our cooperation and participation. Advent is an active not a passive season. A better future and spiritual progress toward the Beloved Community are assured but can be postponed by blind indifference and willful negligence made all the more tragic by the clear and direct appeals to change course. History and future generations will be our judge.

Greta Thunberg has been called an alarmist. So was Noah. So were all the prophets. Something is coming. Advent offers us a vision of hope. Now is the time to prepare, to listen and to act with courage and faith.

Column | Something is coming

When the Spirit Moves