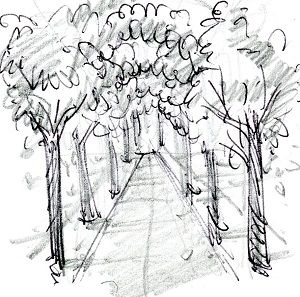 “This is how all will know that you are my disciples, if you have love for one another” (John 13:35).

My father died in 1999 at the age of 96. The last son of 11 children of Irish immigrants, his life witnessed the Depression, two World Wars and the emergence of the modern age. In the years before his death, he went back over his life to make peace with everyone he could remember, grateful for his many blessings, especially for my mother, with him in the nursing home, and for their seven children.  He kept his sense of humor and his memory for poetry he had memorized during detention in high school, reciting “Trees” by Joyce Kilmer toward the end until a stroke took his voice.

A tree that may in summer wear
A nest of robins in her hair;

Upon whose bosom snow has lain;
Who intimately lives with rain.

My father had lived long enough to see families fight over money and possessions after a death, so he was clear about how he wanted his children to remember him. He wanted us to love one other. That was to be his legacy.  He quoted today’s Gospel in which Jesus issues the same request of his disciples. Love for each other was to be the heart of their message to the world about who Jesus was and how his life with the Father and the Spirit was the source of all life.

The Book of Revelation was composed by an unknown author on the Island of Patmos, a Roman penal colony. It combines imagery from earlier apocalyptic literature with Christian iconography to project a feverish panorama of visions about the final conflict between Good and Evil, ending in the triumph of the Lamb of God and his followers. Despite its coded language, the book appears to predict the fall of the Roman Empire, which was persecuting the church at that time.

Despite suffering, a new day was coming, a new heaven and a new earth. God will dwell among his people. Every tear will be wiped away, and there will be no more death or mourning. Living with this promise, the first Christian communities apparently stepped up to meet the challenge. Yet, its extraordinary growth in the first few centuries was not due to some dramatic rescue by divine power, but through the witness of love by the communities themselves.

History suggests that Christians impressed the pagan world with their joyful, enduring spirit, their witness of service, compassion and commitment to social justice. Converts to the church eventually tipped the balance to become the empire’s official religion. What an extraordinary fulfillment of Jesus’s words in today’s Gospel: “This is how all will know that you’re my disciples, if you have love for one another.”

This is the question today’s Gospel poses for all of us. Controversy has driven many Christian groups apart and contributed to the divisions within our country. Deep differences of opinion on social issues define us politically and culturally. The question persists for Catholic leadership and influence. Will the witness of our lives and our love for one another attract anyone to want to join us?

Filled with the spirit, we are sent to do the work of Jesus