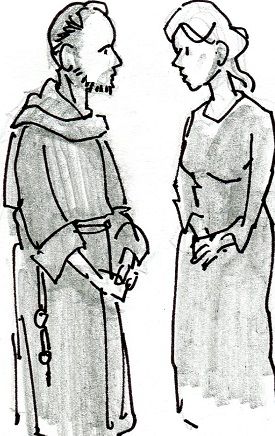 “Their angels in heaven always behold the face of my heavenly Father” (Matt 18:10).

When we place the life of St. Clare in the historical context of the 13th Century, we are reminded just how turbulent the times were in the church as groups like the Cathars and Albigensians challenged the wealth of the bishops and clergy with their own witness to great austerity.  Even as Sts. Francis and Dominic were organizing the mendicant orders, the first formal inquisitions were violently suppressing these other popular movements as heretical.

Distinguishing the new orders from these groups was achieved by giving the Dominicans and Franciscans papal approval to bring them under Rome’s authority.  When St Francis welcomed 18-year-old Clare into his group in 1212*, he had to place her and her followers in Benedictine monasteries at first to protect their status as religious. St. Clare of Assisi lived out her life enclosed in a convent, surviving Francis by 27 years until her own death in 1253.

Despite hagiographic efforts to romanticize this period, the extreme personal sacrifice embraced by Clare and Francis to affirm the poverty of Christ shows how urgent was the need for reform in order to restore the church's authentic Gospel mission. As prophets, they undertook the obedience exhibited by Ezekiel in today’s first reading by consuming a scroll they declared sweet as honey that in effect confronted the official church with its failures and need for conversion.

In today’s Gospel, by placing a child in the midst of his disciples, Jesus was also confronting their successors, the popes and bishops, with Clare and Francis as models of the true Christian spirit.  Their simple holiness revealed the face of the heavenly Father in contrast to the distorted values that had infected the official church at the time.

The cost of discipleship has not diminished.  Evil times require heroic courage to counter the effects of wealth and corruption on whole cultures and systems that cause great harm and suffering to so many.  Examples of sacrifice and service to oppose war, racism and poverty are needed to confront institutional failure and the complicity it fosters. We honor the saints by praying to imitate them.

When Jesus saw that his disciples needed to renew their hope in the power of God to use them to do the impossible, he placed a child in their midst and said, “Here is your model and your motivation.” Whoever recovers in themselves the wonder and innocence of a child will find the Spirit of God. Whoever welcomes and cares for those who are as vulnerable as children will know the power of God to create a world worthy of them.

St. Clare of Assisi, pray for us.

* Editor's note: This date has been corrected from the earlier version.

Who will bring forth Pope Francis' vision?