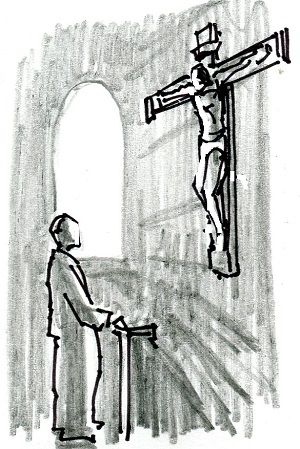 Paul’s stop in Athens occasioned a chance to show his erudition in a speech to some Greek academics about the rational basis for the existence of God.  He is quite eloquent, even quoting one of their poets, but when he comes to the claim that God had raised a crucified man from the dead, they politely dismiss him. Though Paul attracted some converts, after that incident he commits to preaching only the crucified Christ. “We preach Christ crucified, a stumbling block to Jews and folly to the Greeks” (1 Cor 1:23).

Like the crucial transition from a Jewish sect to a global movement, the church was now crossing another critical threshold from Asian thought to the Hellenist world with its rational approach to truth. Greek philosophy prized logic to free facts from mystery by defining, dividing and distinguishing ideas to arrive at clear propositions based on evidence. Biblical truth was mystery revealed and known only by the gift of faith.

What became evident to Paul in Athens was that the mystery of Jesus was only accessible to faith. That God has intervened in history to save humanity by self-emptying love was a paradox too deep for logic.  Only an encounter with the crucified and risen Christ could convince someone that God was inviting the world to repentance and the imitation of this same surrender to love as the path to freedom from sin and to life with God beyond the grave.

While Greek method was useful for defining doctrine at the first church councils, it still had to hold opposite realities — Jesus as both human and divine or three Persons in one God — in dynamic tension, and to preserve the order of faith seeking understanding and not reason proving faith as the only path to revealed truth.  Jesus remains a sign of contradiction to human reason, foolishness to the wise.

The revelation of God in Jesus is a love story and not a treatise, an encounter and not an idea. When Jesus says to his disciples that he has much more to tell them but that “you cannot bear it now,” he is speaking of his death. They will not understand it until they have experienced his sacrifice as the mind-bending and heartbreaking gift of God’s self-emptying love for the world. Only the Holy Spirit can enable this experience through the baptism of fire that is Pentecost.

This was the experience Paul had on the road to Damascus, and it took him a decade at least to articulate its meaning and implications. The church is born in an earthquake of new awareness of God’s mercy for a sinful world. We pray for Pentecost to bring us across the threshold of human justice, order and logic into the divine foolishness and the invitation to imitate this unconditional forgiveness and love. As the church prays for Pentecost, we should know what we are asking for. To encounter the crucified Christ is a life-changing experience and a commitment to love as he has loved us.

Learning to soul-see the hard way

Having the time of my life