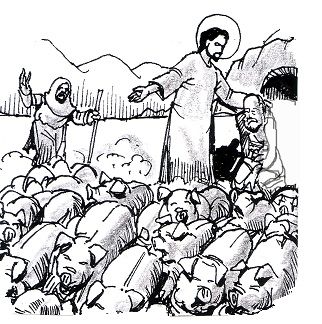 The Lectionary pairs two readings with some similarities but also to contrast Jesus and David in their encounters with people assaulting them verbally. In 2 Samuel 15, King David is fleeing his rebellious son, Absalom, when a man named Shimei, a clansman of the former King Saul, confronts him, throwing stones and calling him a murderer. When one of David’s officers offers to kill him, David, distraught over the collapse of his family, refuses, saying he deserves this abuse for the divisions he has caused.  In today’s Gospel, Jesus is confronted by a deranged man whose demons beg him to depart. Jesus orders them to come out of the man and they rush into a huge herd of swine nearby that jumps into the sea and is drowned.

While David has used his power to sow jealousy and rivalry among his own children, Jesus restores peace to the man being tormented by a legion of evil spirits.  Unlike violent David, Jesus uses his authority to heal and unite. He fulfills God’s promise of a nonviolent messiah rather than a warrior. The deranged man who was chained among the tombs is set free, and when he asks to accompany Jesus, he instead makes him a disciple and an evangelist to his pagan neighbors in the region.

One provocative detail emerges from the story suggesting that Mark may also have been writing for his community under threat of Roman persecution.  Jesus crosses the lake and is outside of Israel confronting imperial control and pagan culture in an area colonized by Rome. Jesus expels a legion of evil spirits, the equivalent of several thousand soldiers that have occupied the region to provide pork, considered unclean by Jews, for consumption in the empire. By including this story in his Gospel, Mark was reminding the early church not to be afraid, because Jesus possesses the Holy Spirit and power greater than Rome.

This is all speculative (pencil thinking), but it reminds us that the Word is always about us and our lives now in the circumstance of our world. Every encounter with Jesus calls us from our chains and the places of death that constrain us so we can be evangelists, disciples who use our freedom to challenge the powers that be in our consumer culture and controlling social structures.  Rather than obey the hidden masters of fear and desire so pervasive in modern society, we belong to Christ. He has everything to do with us because he knows us and loves us. This is the joy of the Gospel.

Everyone is the prodigal son in need of mercy, pope says at Angelus