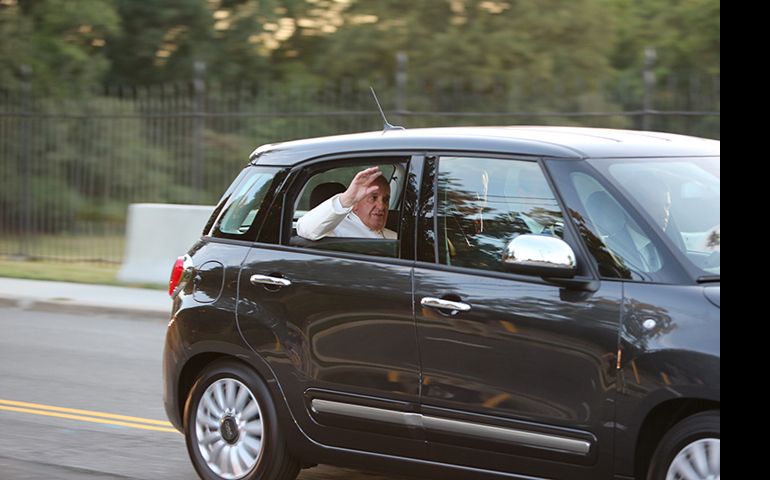 Pope Francis passes by in a black Fiat in Washington, D.C., on Sept. 23, 2015. (George Martell/Archdiocese of Boston)

Now you have your own, real Popemobile.

The Archdiocese of Philadelphia is coordinating with the Philadelphia Auto Show to auction off one of the two dark Fiat 500Ls that shuttled Pope Francis around the City of Brotherly Love during his visit in September. The other will go on display at the show, which runs from Jan. 30 to Feb. 7.

These are not your ordinary Popemobiles. They caused a stir because they are tiny and seemed to fit right into the message of humility that the Pope wanted to convey during his visit to Washington, New York and Philadelphia. The Fiats were dwarfed by the SUVs in the pontiff’s security detail. The 500L is a more bulbous version of the Italian-designed subcompact.

The car will be auctioned Jan. 29 at the annual Philadelphia Auto Show Black Tie Tailgate at the Pennsylvania Convention Center. No estimates of how much it is expected to fetch, although off-site bidding will be allowed. Proceeds from the auction will benefit and The Children’s Hospital of Philadelphia (CHOP).

To ensure authenticity, sponsors of the auction say they were sure to make sure that the vehicle identification numbers of the Fiats provided by the Secret Service match the VINs of the cars going up for auction and display.

“I’m deeply grateful to Fiat Chrysler for its generosity in giving the Archdiocese of Philadelphia the two Fiats used by Pope Francis during his visit to Philadelphia,” said Archbishop Charles J. Chaput in a statement.

“When we learned that these vehicles would be given to us, we wanted to find some way for the public to see them and answer Pope Francis’ call to love and care for the poor,” the archbishop added. “Our partnership with the Philadelphia Auto Show provides us with the wonderful opportunity to share these vehicles with the community while also connecting with a highly engaged audience for the great benefit of society’s most vulnerable and marginalized members.”

Spirituality | Pope Francis’ mini popemobile could be yours

Vatican seeks to replace its service vehicles with all-electric fleet

Pope's white Lamborghini up for raffle; winner gets trip to Rome