Fourth Sunday of Advent: 'Blessed are you who believe!' 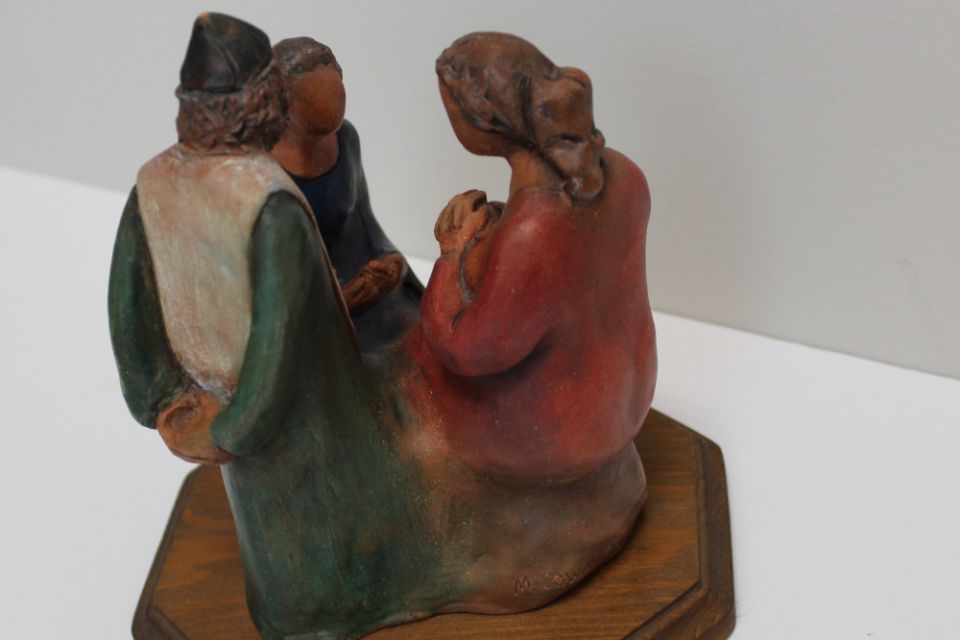 This is the day for the little ones, the marginated, the ones most people don't notice. Start with the fact that Micah is classified among the "minor" prophets, less illustrious than his contemporaries, Isaiah, Amos and Hosea. Adding to that indignity, scholars agree that the selection we hear today was probably written by someone else. So much for greatness!

Nevertheless, Micah, a man from the insignificant countryside, was perfectly situated to understand God's preference for working through the very people who never attain places of prominence. Thus, Micah tells Israel that just as their greatest king emerged from obscurity, God's future plans will come about through people equally unnoted or even disdained.

If our reading from Micah suggests that we look to the peripheries of importance to find God's work, the selection from Hebrews refocuses this message as a critique of superficial or externalized religious practice. Interpreting the divine motive for the Incarnation, Hebrews' author quotes Christ praying: "Sacrifice and offering you did not desire, but a body you prepared for me."

While that might sound like a simple explanation of Christ's coming, the subtext undermines sacrificial practice as a way to please God. This is hardly a new message. Sayings from the prophets Isaiah and Hosea and Psalms 40 and 51 figure among multiple scriptural statements of the same idea.

According to Hebrews, Christ became flesh, not to offer sacrifice, but to carry out the will of God on Earth. That transfers the most important of religious activities out of the temple and into the streets where all people are invited to consecrate their own body and activity to fulfill God's will. Again, it's the little people in the center.

Today's Gospel presents the encounter between Mary and Elizabeth, the two women pregnant with the future God was preparing. Representing the era when Christianity emerged from its Jewish roots, the young woman goes in joyful haste to meet the elder who receives her with equal joy.

Continuing the pattern of God's action through those considered small, the revelation of God's future plans comes to life through women. Zechariah, the one man involved, was a minor official among the 18,000 priests in Palestine at the time these events happened. Then, as Mary and Elizabeth met, he could only observe in deferential silence.

With all the wonder, the stories and hymns surrounding the Nativity, it is easy to overlook Elizabeth's hymn of praise in today's Gospel. Mirroring her ancestor Sarah who did the work of hospitality and then laughed at hearing God's improbable promise to her and Abraham, Elizabeth welcomes Mary and her unborn child with a delight that could only be expressed in song: "Blessed are you!" Then, celebrating the grace they shared, she sang, "Blessed are you who believed!"

In all humility, as the elder ceding to the new, Elizabeth declared that the miraculous child of her womb was secondary to the one Mary bore. As the mother of the forerunner, Elizabeth became the first to proclaim faith in Jesus, calling him "my Lord" even before he was born. With this, Luke depicted his interpretation of the emergence of the Christian era from God's historical relationship with Israel.

Elizabeth, like her mothers in the Hebrew tradition, rejoiced in God's goodness without any hint of rivalry with Mary. Mary, even more than those who went before her, risked her reputation and therefore her life by accepting the angel's invitation before she was with a husband.

In so doing, she did what her Son would do and ask of his disciples: She gave up her life for the sake of God's plan. Once she accepted God's invitation, she had nothing left to lose; she was as free as Jesus would promise others they could be.

These readings invite us to prepare for Christmas as the feast of God who becomes small and dependent on the little ones of history.

These readings invite us to prepare for Christmas as the feast of God who becomes small and dependent on the little ones of history. They remind us that being marginalized by people of influence represents no impediment for people willing to allow God's plan to come to fruition through them.

In a very direct way, these readings call the church to recognize how God has acted and continues to work through women in spite of, or even because of the way they are excluded from official positions of power and prestige. Luke paints a vivid picture of women giving life to the good news in the presence of a silenced priesthood.

Today's liturgy offers the little ones of history the promise that God truly works through them and a challenge to risk allowing that to happen while the privileged are challenged to remain silent enough to perceive where God is working in spite of them. Blessed are we when we discern how the Lord's promises are being fulfilled!

A version of this story appeared in the Dec 10-23, 2021 print issue under the headline: 'Blessed are you who believe!' .

Column | Fourth Sunday of Advent: 'Blessed are you who believe!'

Isaiah carries a timely message for us