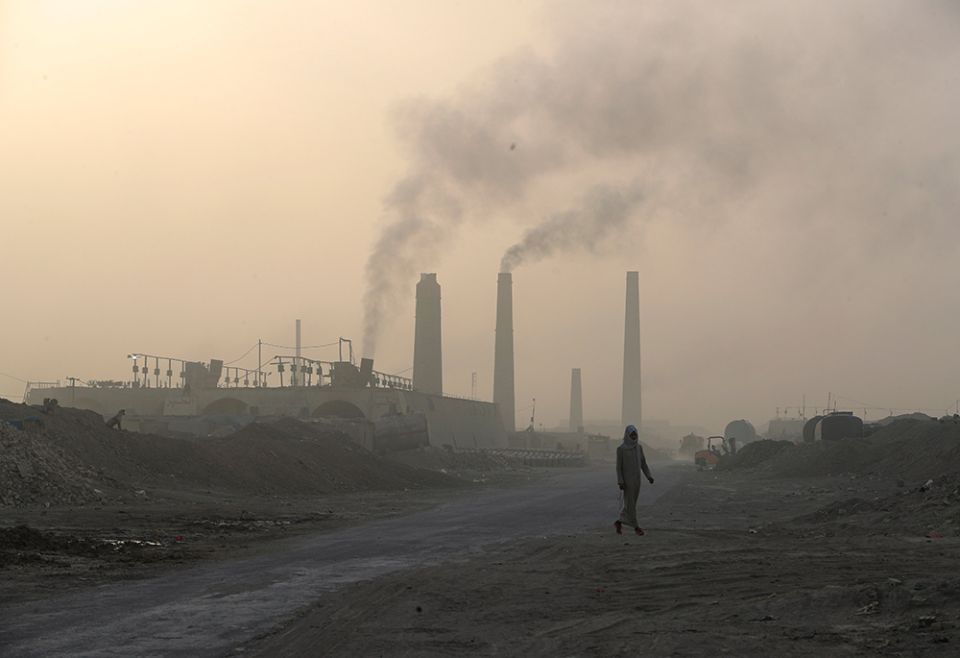 A general view shows brick factories as smoke rises from the stacks in the town of Nahrawan June 5 in Baghdad, Iraq. (CNS/Reuters/Thaier al-Sudani)

Today's Gospel describes great crowds "traveling with" Jesus. That portrays people acting like an audience at a spectacle, groups hanging out, being entertained, perhaps even a bit proud of being fans, yet not committed enough to opt for a one-way ticket with Jesus. It's to these folks that Jesus says, "If you want to be my disciples, you must hate your very own family."

While that sounds unreasonably harsh, it's actually worse than you think. According to scripture scholar David E. Garland, the word we translate as "hate," is better understood as "indifference." If you think that's better, think again. Hate, the inverse of love, is emotionally involved; contact or even the thought of someone we hate provokes strong feelings — we remain very much aware of and influenced by that person.

Indifference is the emotional equivalent of a temperature of 68 degrees: neither hot nor cold. It does not keep our attention or solicit concern. Jesus showed this sort of indifference when someone blessed his mother and he replied: "My mother and my brothers are those who hear the word of God and act on it" (Luke 8:21). After saying that, Jesus offered the crowds two more examples of the requirements for joining his company.

Luke leads with the harshest of Jesus' demands: "If you want to be my disciple, you must bear your own cross and follow me." To put this in context, remember that Luke wrote for a Christian community that knew Jesus' story. What he quotes Jesus as saying is really directed to people who considered themselves Christians. Because Luke wrote after the year 70, he wasn't depicting a one-time event in the life of Jesus, but the cruciform life of all Jesus' followers. Jesus carried a cross and died on it once. Luke warns would-be followers that their life's journey will be constantly marked by the sign of the cross. To carry one's own cross is to follow Jesus in his life of free self-giving, a death to self that led him to become the victim of powerful people who truly did hate him.

The second of Jesus' demands, "renounce all your possessions," can be understood as a reiteration of the first, simply sung in a different key. Poverty is a major theme in Luke, as it is in the writings of Pope Francis. Luke quotes Jesus as saying "anyone who does not renounce all his possessions cannot be my disciple." In Evangelii Guadium, Francis explains that possessions have dangerous power to make our hearts "complacent yet covetous." He describes materialism as, "the feverish pursuit of frivolous pleasures," warning that it wields treacherous potential to blunt our consciences, leaving no room for God's love or voice. That's a pretty dire portrayal of how possessions can incapacitate disciples.

The Gospels tell us that only the women who followed Jesus and his closest male disciples actually abandoned family life and lived from a common purse (Luke 8:1-3 and 5:1-11). Nevertheless, we know that the Christians tried to create the kind of family Jesus described. In the Acts of the Apostles Luke writes: "There was no needy person among them" for they put what they had in common and the apostles "distributed to each according to need" (Acts 4:34-35).

It seems that what Jesus really counseled was an indifference to blood ties such that one was not bound by them, nor by self-preservation nor by possessions. That means that, like the good Samaritan, the need that appears on our road must trump our other priorities. (If you want to calculate the cost of that, imagine how that Samaritan explained to his wife what had happened to the oil, the wine and the money he was supposed to bring home!)

What does this mean for us today? How are we to move from being Jesus' fans to his followers? According to Francis, today's most urgent call is to the "ecological conversion" that will lead us to heal and renew our common home. Francis reminds us that creation is languishing like the discounted victim on the side of the road who implores us "to put an end to our abuses and to her destruction." Ecological conversion is the ultimate and most urgent call to protect life; as Francis says, it is our call to " 'protect mankind from self-destruction' " (Laudato Si', Paragraph 79) Francis adds: "Living our vocation to be protectors of God's handiwork … is not an optional or a secondary aspect of our Christian experience."

We are not called to walk through Israel with Jesus. Few of us are called to forsake home and family completely. But today, everyone who wishes to be Jesus' disciples must carry the cross of wounded creation and renounce what harms her. This is not an option.

A version of this story appeared in the Aug 19-Sept 1, 2022 print issue under the headline: Our wounded creation .

Say what you hear