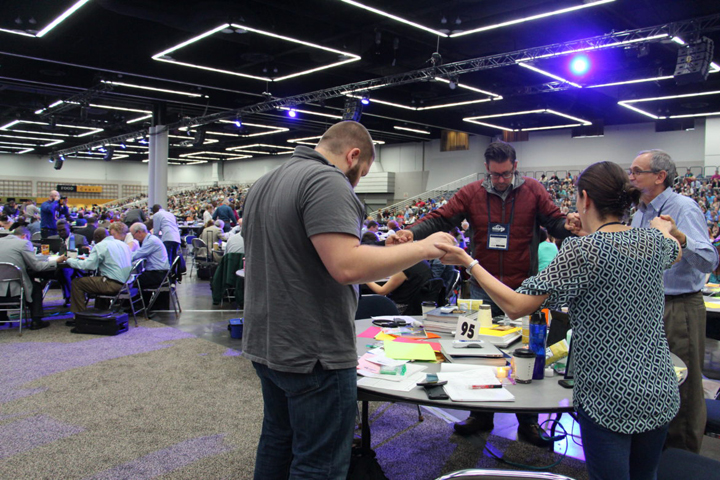 Delegates at the 2016 United Methodist General Conference in Portland, Ore., respond in prayer May 18 after hearing from Bishop Bruce Ough. (RNS/Emily McFarlan Miller)

The debate -- over how to debate the rules -- became so convoluted that at one point Missouri delegate Margie Briggs called for prayer and said:

"I believe we are confusing God at this point."

Whether or not God was confused, many people were during the 11-day roller coaster ride that was the United Methodist Church's General Conference, which ended May 20. It is held every four years to chart the course of the global denomination.

Which is no easy task. The 12 million United Methodists are divided geographically with around 7 million in the United States and many of the rest in Africa and Asia. They were also deeply divided on issues such as homosexuality and reproductive rights, not to mention church governance and finances.

"What portended to be a really highly divisive conference may actually have ended up bringing us together a bit," said the Rev. Adam Hamilton of The United Methodist Church of the Resurrection in Leawood, Kan.

"We may have found another way of working through this that may hold most of the church together."

Many delegates on all sides of the issues expressed reasons to be hopeful. In addition to the intense and at times fiery debates, the Rev. Kennetha Bigham-Tsai of Michigan said she also was inspired by "the sustaining fire of the warmth of the Spirit invading my spirit, even in the hard times."

And there were plenty of hard times as the 864 delegates, half of them clergy, attempted to move through more than 1,000 pieces of legislation submitted to the conference.

The proceedings often were interrupted by protests, points of order and delays -- many than at past conferences, many delegates noted. Bishop Bruce Ough joked during Friday's closing worship that after Jesus' resurrection, some of his disciples had doubted and "a few had a point of order."

For some, it was too much.

The Rev. Don Underwood of Christ United Methodist Church in Plano, Texas, said he didn't want to attend another General Conference like this.

"It isn't working. It's way too much money to achieve very little. Lots of legislation dies," he said.

The procedural wrangling was evident in the debate over the so-called Rule 44.

That debate stretched through much of the first week and ended with delegates voting down a rule that would have allowed them to discuss some of the most contentious issues in small groups. It had been suggested by the commission that plans the conference after debate, particularly over ordaining LGBT clergy and allowing clergy to officiate same-sex marriages, had turned nasty at the 2012 General Conference in Tampa, Fla.

Protesters chanting "Black lives matter" and "Homophobia's got to go" shut down Monday's afternoon plenary for about 20 minutes, and Ough, just named president of the Council of Bishops, was forced to address rumors of schism midway through the second week. In a first-ever move, delegates then asked him to bring back direction from the bishops on how the church could move forward together through issues regarding the full inclusion of its LGBT members.

Tension remained high as a characteristically convoluted vote first shot down, then approved the bishops' recommendations, which deferred all votes on human sexuality until a commission it appoints can discuss them.

With more than 50 items deferred, presiding bishops attempted to speed up the voting, with Bishop Sally Dyck of Chicago sharing a "hot tip" with delegates: "Don't go to the mic."

Here is some of the notable actions that were taken:

The next United Methodist General Conference is scheduled for 2020 in Minneapolis, Minn., although the bishops' recommendations that were adopted allowed for the possibility of a special session to discuss LGBT inclusion before then. An effort to pass legislation pinpointing the date for a special session failed.