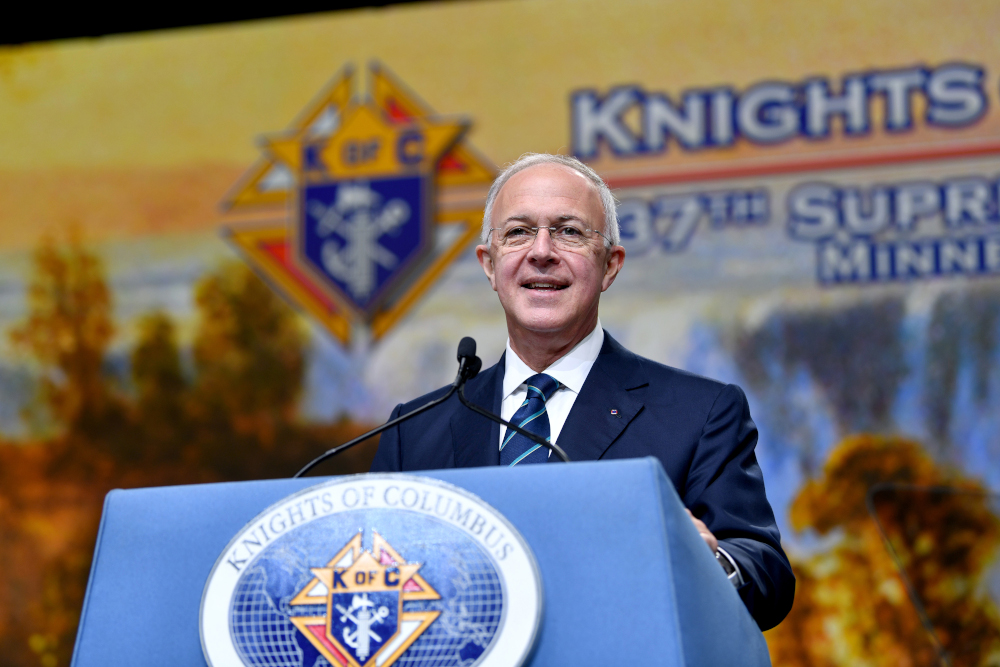 Five years after the Islamic State invaded northern Iraq and began systematically persecuting the country's Christians, the Knights of Columbus are continuing their work of supporting Iraqi parishes that are rebuilding, Supreme Knight Carl Anderson said in his annual report Aug. 6 at the Knights' 137th Supreme Convention in Minneapolis.

"The road ahead for our Christian brothers and sisters is long and dangerous," Anderson said, telling the 2,200 Knights, family members, clergy and others about the group's new "Adopt a Parish" program, encouraging Knights councils to commit to two years of directly supporting parishes across Iraq. The initiative is in addition to the $25 million already committed to helping the Middle East region and its displaced and threatened people since 2014, he said.

"As new threats emerge, the Knights of Columbus will be there with prayers and support," Anderson said. "We will work to ensure that Christianity has a future in the lands where it first flourished."

Emphasizing the Knights' nearly 2 million members are "Knights of Unity," Anderson also outlined new efforts to reach Native Americans in the U.S. and First Nations people in Canada and to help refugees at the southern U.S. border.

He also honored the bravery of 18-year-old Kendrick Castillo, who gave his life while protecting his classmates during a May shooting at his Denver-area high school. After Anderson's report, the fraternal organization posthumously named Castillo an honorary Knight.

Anderson said the Knights have continued to grow with the addition of college councils and councils in Poland, Ukraine, Lithuania, South Korea and France.

Support for human dignity in many forms underlies the work done by the Knights' roughly 16,000 councils, Anderson said. He said in January the Knights met a 10-year goal of placing 1,000 ultrasound machines in pregnancy resource centers throughout the United States.

"Our ultrasound initiative is now the greatest humanitarian achievement in the history of the Knights of Columbus. ... We can, and I am confident that we will, save millions of unborn lives. But pro-life is not only a matter of charity. It is also a matter of justice."

Another outreach is the Knights' plan to increase its efforts to reach out to Native Americans, Anderson said, noting that as many as one in four Native Americans in the United States are Catholic.

In partnership with the Diocese of Gallup, New Mexico, and the Southwest Indian Foundation, the Knights will break ground Aug. 11 on a new shrine to the first Native American saint, St. Kateri Tekakwitha.

"It is our hope that in the years to come this St. Kateri Shrine will become a national spiritual home for Native Americans and for all Catholics in North America," Anderson said.

The Knights also plan to seek new ways to work with the church's Black and Indian Mission Office and encourage local Knights councils to become more engaged with Catholics living on reservations and tribal land, he said.

Looking toward the U.S. southern border, the order will commit at least $250,000 in humanitarian aid to assist refugees there, Anderson said. The decision is not a political statement, he said but represents an extension of the order's assistance to refugees around the world.

"As Catholic men and family men, we are all deeply concerned for the plight of the refugees who have fled their homelands into ours," Anderson said.

"With more than $109 billion of insurance in force, nearly $9 billion in annual sales, and more than $26 billion of assets under management, we always remember that our Catholic difference is key to our success," he said.

This fall, the Knights will launch a campaign to tell its 137-year-old story of service, sacrifice, and standing for truth. Called "Why We Are Knights," the campaign will help more people see the work of many Knights and why they do it.

"We are not just one point of light," Anderson said, referring to the late President George H.W. Bush and his 1988 speech, in which Bush called the order one of the thousand points of light making the country stronger.

"In our united efforts we are nearly 2 million points of light," he said.