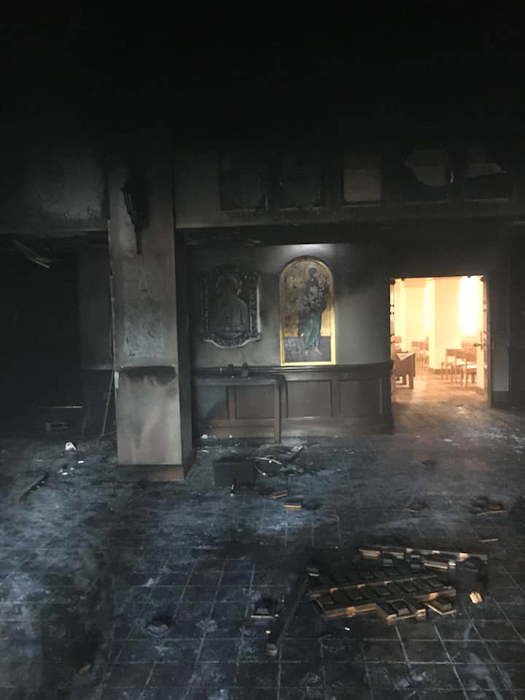 Queen of Peace Catholic Church in Ocala, Fla., is seen July 13, 2020, after it was set ablaze by a suspect who drove his van through the front doors two days earlier. (CNS/courtesy The Florida Catholic) 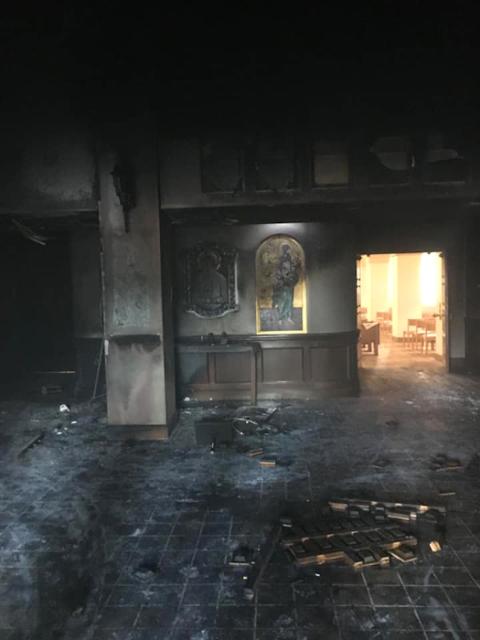 Queen of Peace Catholic Church in Ocala, Fla., is seen July 13, 2020, after it was set ablaze by a suspect who drove his van through the front doors two days earlier. (CNS/courtesy The Florida Catholic)

A man crashed his van through the doors of Our Lady Queen of Peace Church in Ocala, Florida, early in the morning July 11 and once inside, the church's pastor said, the man set the interior of the church ablaze and drove off.

Fr. Patrick O'Doherty, pastor of the Ocala parish in the Orlando Diocese for more than 33 years, was taking a stroll around the property, preparing for the upcoming morning Mass.

"I was walking around about at a quarter of eight when a white van drove into the front door, broke the door down. The driver exited the vehicle and entered farther into the church. When he came out, a fireball came out behind him," O'Doherty said, adding he heard no explosive sounds.

"I was 10 feet away from him. Luckily, Mass hadn't began yet and the pews weren't packed. There was about five individuals in there, saying their rosaries before Mass," he told the Florida Catholic, Orlando's diocesan newspaper.

There were no injuries reported. In reaction to the incident, the parish may make further security adjustments in the future. The church is already equipped with cameras and yellow barriers in the parking lot for designating the flow of traffic, an obstacle, O'Doherty said, the suspect ignored when navigating toward the doors of the church.

According to police reports, the suspect, Anthony Steven Shields, 24, was apprehended by police after a chase. Church video shows the suspect pouring gasoline into the foyer area of the church and igniting the blaze by hurling a lit shoe onto the gasoline.

Shields, of Dunnellon, Florida, quickly fled the scene in his van, crashing into other vehicles, and evaded Marion County police until Deputy Josue Gonzalez was able to force Shields' van to a halt. He was apprehended and taken into custody.

During an interview with the police, Shields said he was diagnosed with schizophrenia and hadn't been taking his medication. He was being held in Marion County jail without bail.

He has been charged with a slew of felony charges including attempted second-degree murder, arson to a structure and felony fleeing or attempting to elude, and several more. The FBI and the Florida Department of Law Enforcement are working together in their investigations.

"Our freedom of worship granted in the Constitution is a freedom that we all hold dear," Marion County Sheriff Billy Woods said in a statement. "My deputies and I are sworn to protect that right and will always ensure our citizens can worship in peace. I'm proud of my deputies for capturing this man so quickly and we appreciate the assistance from all of the state and federal agencies that worked alongside of us during this investigation."

"We praise God that no one was injured," said Jennifer Drow, senior director of communications for the Diocese of Orlando. "We join in prayer for Fr. O'Doherty, the parishioners of Queen of Peace Catholic Church, our first responders and the gentleman who caused the damage. May we come to know the Peace of the Lord."

Immediately upon hearing the news of the crash and fire at the church, Orlando Bishop John G. Noonan visited the scene to offer his help and be supportive of O'Doherty and his parishioners.

"In all of this, Fr. O'Doherty was hopeful that the investigation would be completed before the celebration of the vigil Mass so parishioners could come to pray, albeit in the parish hall," Bishop Noonan wrote in his column for the Florida Catholic.

Mass was first celebrated at Queen of Peace in 1984; it established as a mission of Blessed Trinity Parish in Ocala. Irish-born O'Doherty was tapped as pastor in 1987. The parish's sanctuary was dedicated and blessed in 1993; it was constructed to replace an all-purpose building that was erected in 1986.

O'Doherty said he isn't sure if the suspect was a disgruntled parishioner, but added a parishioner "had claimed that she saw the suspect's van many times in the parking lot in the last three months."

With all the turmoil currently facing the nation and world on multiple fronts, O'Doherty told the Florida Catholic that although he was saddened by the attack on the church, he wasn't surprised.

"I knew this could happen in this political and religious climate," he said.

Masses at Queen of Peace will be held in the parish hall in the interim, as the church building is closed during the investigation. Even though his parishioners may be frightened and confused, O'Doherty wants his parishioners to know that they are all in his prayers.