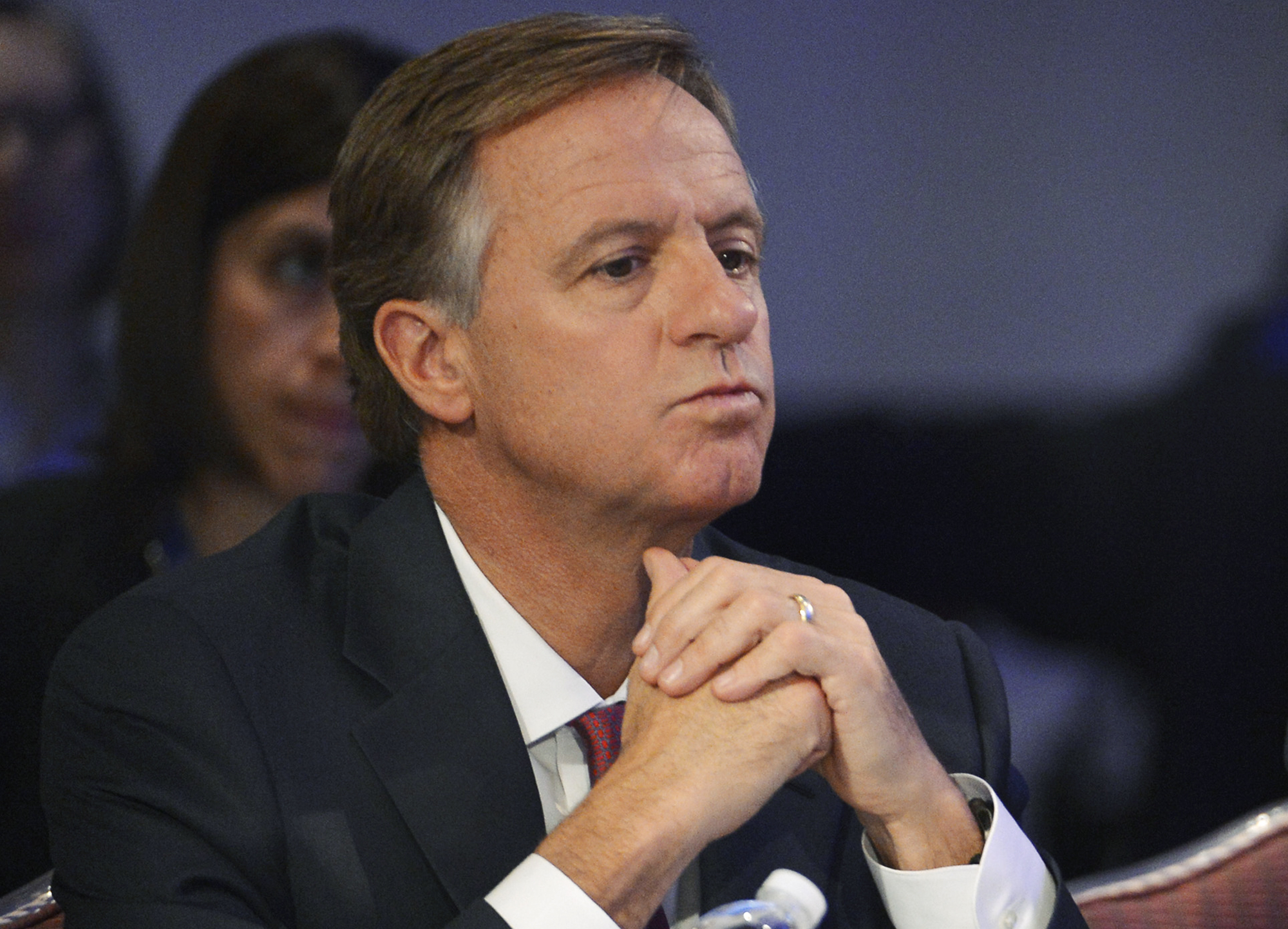 Tennessee Gov. Bill Haslam is pictured in a 2016 photo. The state's Catholic bishops, Bishops J. Mark Spalding of Nashville, Richard Stika of Knoxville and Martin Holley of Memphis, have written to Haslam urging him to "use your authority as governor to put an end to the fast-track executions planned" in the state in the upcoming months. (CNS/Reuters/Mike Theiler/pool)

Bishops J. Mark Spalding of Nashville, Richard Stika of Knoxville and Martin Holley of Memphis have written to Gov. Bill Haslam urging him to "use your authority as governor to put an end to the fast-track executions planned" in the state of Tennessee in the upcoming months.

"It is within your power to establish your legacy as a governor of Tennessee who did not preside over an execution on your watch," the state's three Catholic bishops wrote.

The last person to be put to death by lethal injection in Tennessee was Cecil Johnson in 2009, when Phil Bredesen was governor. The state has carried out a total of six executions since 1976, five of those during Bredesen's tenure.

In Tennessee, the governor has sole authority to grant clemency to death-row inmates.

There are currently 62 men and one woman on Tennessee's death row.

The next man scheduled to be executed by the state is Billy Ray Irick Aug. 9. Irick, 59, who has a history of serious mental illness, was convicted in 1986 of the rape and murder of a 7-year-old Knox County girl named Paula Dyer, and has been on death row for more than three decades.

In their letter to Haslam, the bishops called for mercy, including for those who have committed terrible crimes. "We join with many other religious denominations in firm opposition to the execution of even those convicted of heinous crimes," they wrote.

The bishops thanked Haslam for meeting with them in the past, and for his willingness to learn more about the Catholic Church's opposition to capital punishment and the foundations of that teaching.

In their letter, the bishops recalled the story of St. John Paul II's visit to St. Louis in 1999, when he called for an end to the death penalty as both cruel and unnecessary. The pope said, "It is simply not necessary as the only means to protect society while still providing a just punishment for those who break civil laws," the bishops wrote in their letter. "Rather than serving as a path to justice, the death penalty contributes to the growing disrespect for human life."

The bishops' letter to the governor comes at the same time that a trial begins over Tennessee's new lethal injection protocol. More than 30 death-row inmates filed suit against the state, contending that the new three-drug combination -- midazolam, vecuronium bromide and potassium chloride -- used in the lethal-injection protocol amounts to cruel and unusual punishment.

Tennessee has not used this three-drug cocktail to carry out an execution before, but similar or identical drug combinations were used in botched executions in other states, according to the death-row inmates' attorneys.

The lethal-injection drug trial began July 9. With that underway and Irick's execution date set for Aug. 9, the state's capital punishment system is facing renewed scrutiny. The state's Catholic bishops are not the only ones voicing their opposition to it.

The national organization Conservatives Concerned About the Death Penalty earlier this month named Nashville resident Hannah Cox its new national manager and is expanding its coalition of conservative lawmakers and constituents who are "questioning whether capital punishment is consistent with conservative principles and values due to the system's inefficiency, inequity and inaccuracy."

Cox, formerly with the Beacon Center of Tennessee, a free-market think tank, said in a statement, "Ending the death penalty aligns perfectly with my conservative beliefs because it eliminates the risk of executing innocent people, reduces costs to taxpayers, and is consistent with valuing life."

Three men have been released from Tennessee's death row in recent years after they were proven innocent. Paul House, who was exonerated by DNA evidence after spending 22 years on death row, has written an open petition to ask the state not to pursue Irick's execution or any execution, noting the risk of executing an innocent person.

In June, the American Bar Association released a study titled "Potential Cost-Savings of a Severe Mental Illness Exclusion from the Death Penalty: An Analysis of Tennessee Data," which noted that the state could save an estimated $1.4 million to $1.8 million per year by adopting a ban on capital punishment for defendants with severe mental illness.

The report stated that if defendants with severe mental illness were excluded from the death penalty, this "could result in cost savings because a subset of individuals could face expensive capital prosecutions and decades of appeals would become ineligible" for capital punishment.