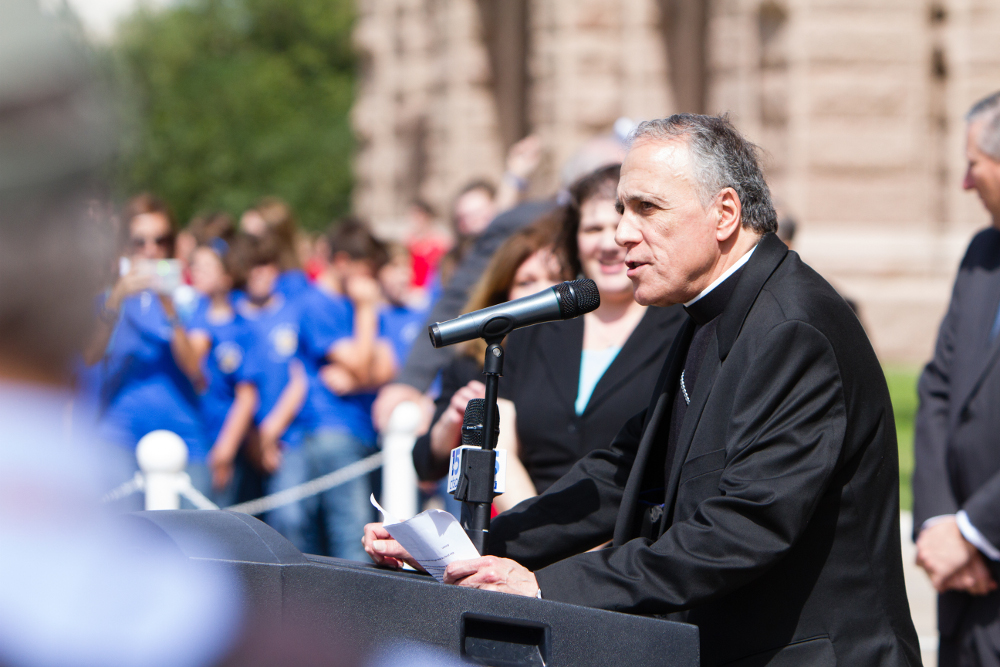 Cardinal Daniel DiNardo of Galveston-Houston, president of the U.S. Conference of Catholic Bishops, speaks during Texas Advocacy Day in 2017 at the Texas Capitol in Austin. In an action to be more transparent, the 15 Catholic dioceses in Texas will release the names of clergy who were credibly accused of sexually abusing a minor. (CNS/James Ramos, Texas Catholic Herald)

In an action to be more transparent, the 15 Catholic dioceses in Texas will release the names of clergy who were credibly accused of sexually abusing a minor, according to an Oct. 10 statement issued by the Texas Catholic Conference of Bishops in Austin.

"We believe this is in the path of healing, accountability and transparency," said Archbishop Gustavo García-Siller of San Antonio. "We are called as bishops to be more accountable and more responsible. This is the just and right thing to do."

At a Sept. 30 meeting, the Texas bishops had agreed on jointly releasing the names, as part of "ongoing work to protect children from sexual abuse" and "promote healing and a restoration of trust" in the Church, according to the statement.

García-Siller recognized that this effort will be most painful for the survivors of abuse and said the Catholic Church remains committed to supporting victims in every way. He echoed other Texas bishops and encouraged anyone affected by abuse to come forward to officials.

Since the "Charter for the Protection of Children and Young People" was adopted by U.S. bishops in 2002 in Dallas, García-Siller said, "the story has changed."

He noted the drastic decrease in cases of abuse due to zero tolerance. In San Antonio, and across the church, he said he saw a clear improvement in the atmosphere at parishes and schools, with an increased awareness, attention and support for measures from laity and clergy to create safer and healthier communities.

But still, the archbishop said, "the efforts will never be enough. (Each) case of abuse is a tragedy."

The release of clergy names is expected to come no later than Jan. 31, 2019. The Personal Ordinariate of the Chair of St. Peter, whose chancery is located in Houston, will join the 15 Texas dioceses in releasing names.

The list will reflect the deep examination of nearly 70 years of diocesan records and files, dating back to at least 1950 and up to the present day. For dioceses founded more recently, like the Diocese of Tyler (1986), their respective lists will begin at their founding dates, said the Texas Catholic Conference of Bishops, which is the public policy arm of the state's Catholic bishops.

Because there are more than 8.5 million Catholics and at least 1,320 parishes in Texas, the Catholic conference said compiling the names is a "major project," noting that dioceses will coordinate with the dozens religious orders that work in many Texas dioceses to also examine their information.

"This is not an easy task," García-Siller said. The effort will be more expansive, comprehensive and "we remain committed to being a more transparent and authentic church leadership." In Fort Worth the diocese published a list of names of clergy alleged with credible abuse in 2007.

He also sees the laity as part of the solution. "Everyone is needed to make a safer environment … in the church and even beyond the church," he said. "Hopefully more victims will come forward, not just in the church, but in other institutes (and places) so that society will be safer."

The archbishop also chairs the Committee on Cultural Diversity in the Church for the U.S. Conference of Catholic Bishops.

In Rome for the Synod of Bishops, Cardinal Daniel DiNardo of Galveston-Houston, USCCB president, and Archbishop José Gomez of Los Angeles, USCCB vice president, met privately with Pope Francis Oct. 8 as questions continue over the handling of years of allegations of sexual misconduct by former U.S. Cardinal Theodore McCarrick, retired archbishop of Washington.

It was the second such meeting the USCCB officials have had with the pope in recent weeks; they met in September to discuss the abuse crisis in the United States.

On Oct. 6, DiNardo said he welcomed the additional measures the pope is taking "to ensure the faithful are protected from the evil of sexual assault."

About the upcoming release of names by the Texas dioceses, DiNardo said called it "an action in response to the faithful's call for greater accountability and transparency" in the Oct. 10 statement from the Texas Catholic Conference of Bishops.

Every bishop in Texas shared his concerns for all who have been hurt, he said.

"We are completely committed to eradicating the evil of sexual abuse in the church and promoting healing among the faithful and those injured by this crime," DiNardo said.

The dioceses planned to issue their own release, along with the statement of the bishops.

These efforts by the Texas bishops, García-Siller said, also reflect the pope's call for truth and accompaniment, or walking with others, in the Church.

In an Oct. 6 statement, Pope Francis said: "We will follow the path of truth wherever it may lead."

Ramos is a staff writer and designer for the Texas Catholic Herald, newspaper of the Archdiocese of Galveston-Houston.