Experts: 'Pacem in Terris' had radical impact on church teaching 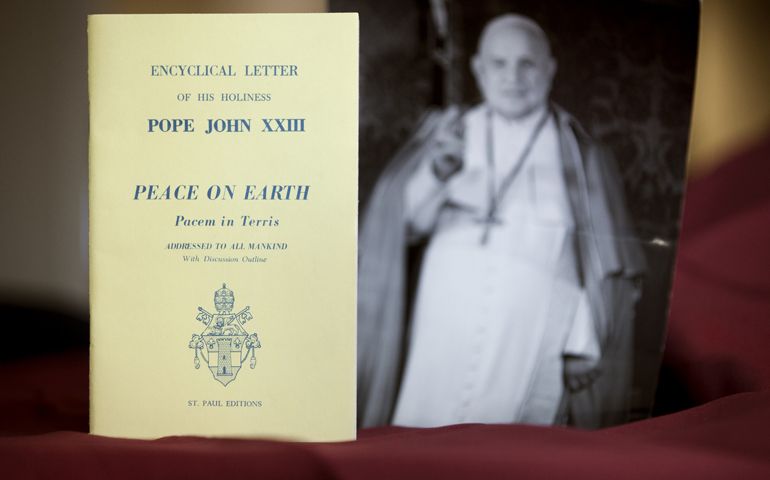 An early edition of the encyclical "Peace on Earth" ("Pacem in Terris") is pictured next to a photo of its author, Pope John XXIII. (CNS/Nancy Phelan Wiechec)

The conferences -- at The Catholic University of America April 9-10 and Georgetown University April 12 -- analyzed the landmark papal document, issued April 11, 1963, from a perspective of 50 years later.

Despite the encyclical's stated topic of peace, the speakers focused more on Pope John's analysis on the intrinsic dignity of every human person -- with its implications for religious freedom, the equal rights of women, concern for the poor, rights of developing nations, possibilities of stronger international institutions to address the then-incipient issues of globalization, and other key social and political issues of church concern -- some of them even more burning today than they were 50 years ago.

Several speakers saw in initial actions of the new Pope Francis signs for hope that John XXIII's Pacem in Terris vision of church engagement with the world will gain new life in the next few years.

Maryann Cusimano Love, an associate professor of politics and international relations at Catholic University and an adviser to the U.S. bishops and the Pentagon, said John's assertions on the rightful equality of women in public life continue to stand as a major global challenge. She was a speaker at both the Catholic University and Georgetown conferences.

Fr. J. Bryan Hehir, also a key speaker at both conferences, highlighted John's prophetic warnings against all war in a nuclear age and against nuclear proliferation.

Hehir, a former student of Henry Kissinger and widely regarded as one of the church's leading theorists on issues of war, peace and international politics, is a Boston priest who played a critical role in the development of the U.S. bishops' landmark 1983 pastoral letter, "The Challenge of Peace." He is currently a professor of the practice of religion and public life at Harvard University while also serving as Boston archdiocesan secretary for Health and Social Services.

At the Georgetown conference, titled "Human Dignity in World Affairs: Celebrating Pacem in Terris and its Legacy," Hehir called Pacem in Terris "a pivotal text in [papal] encyclical history" that played a major role in the development of the Second Vatican Council's Declaration on Religious Freedom and its Pastoral Constitution on the Church in the Modern World, and on Pope John Paul II's encyclical Centesimus Annus ("The Hundredth Year"), which marked the centennial of Pope Leo XIII's 1891 encyclical on labor, Rerum Novarum.

Two days earlier at Catholic University's "Peacebuilding 2013: Pacem in Terris at 50" conference, Hehir noted that in 1963 -- when John XXIII called war an irrational way to settle injustices in an atomic age -- the main framework in world politics was the Cold War nuclear standoff between the world's two superpowers, the United States and the Soviet Union.

One of the beauties of Pacem in Terris, Hehir said, was the fact that against centuries of Catholic thought and practice asserting the primacy of truth over conscience in religious matters, John simply asserted, without laying out detailed arguments, that civil authorities have an obligation to protect the freedom of their citizens to worship and practice religion as they see fit in their own conscientious belief.

It took three more council sessions after John's death in June 1963 for the fathers of Vatican II to struggle to consensus on the same conclusion and adopt their Declaration on Religious Freedom (Dignitatis Humanae) in 1965, he said.

Participants in both conferences agreed that their sessions could have focused more on John's famous declarations about war and peace, that "justice, right reason, and the recognition of man's dignity cry out insistently for a cessation to the arms race. The stock-piles of armaments which have been built up in various countries must be reduced all round and simultaneously by the parties concerned. Nuclear weapons must be banned. ... In this age which boasts of its atomic power, it no longer makes sense to maintain that war is a fit instrument with which to repair the violation of justice."

But the speakers found that other themes in the encyclical provided even more radical foundations for church teaching and practice today, 50 years after its issuance.

(In passing, the Vatican had scheduled a major international symposium on the 50th anniversary of Pacem in Terris this March, Cardinal Peter Turkson, head of the Pontifical Council for Justice and Peace, told NCR April 10, but when Pope Benedict XVI announced his resignation effective at the end of February, in light of the imminent conclave and election of a new pope, the council postponed that symposium until October.)

Both the Catholic University conference April 9-10 and the Georgetown gathering April 12 sought to situate Pacem in Terris historically -- in theological terms, for example, it marked a major shift in papal teaching from reliance on classical scholastic categories of natural law to a more inductive approach based on the signs of the times.

That approach had significant influence on Vatican II, which began in October 1962 and, after John XXIII's death, continued through 1965 under the pontificate of Paul VI. Pope Paul would advance the approach in 1967 with his major social encyclical, Populorum Progressio.

Some would argue that more recent social encyclicals like John Paul II's Laborem Exercens (1981) and Centesimus Annus (1991) or Benedict XVI's Deus Caritas Est (2005) and Caritas in Veritate (2009) have represented something of a return to more classical theological categories like natural law -- which spoke less of intrinsic human rights and more of human duties -- and have given a more conservative take on many of the Catholic social teachings raised by John XXIII and Paul VI.

Hehir noted that one of the interesting features of Pacem in Terris is its constant linkage of human rights with duties -- that even the most absolute of rights entails duties as well.

Speakers at both conferences alluded to that papal approach numerous times, several of them noting that the encyclical's approach marked an attempt -- largely successful, in their eyes -- to establish a real bridge between the church's traditional natural law approach of focusing chiefly on moral obligations or duties and the Enlightenment/American democratic emphasis on rights almost divorced from correlative duties and obligations entailed in the exercise of rights.

Editor's note: Jerry Filteau also has written about the impact Pacem in Terris had on his personal life: Revisiting 'Pacem in Terris' personally after 50 years.

Commentary on 'irregular unions' should be required reading for all pastors

Early women leaders: from heads of house churches to presbyters

Hope, concrete realities the focus at gathering of African theologians