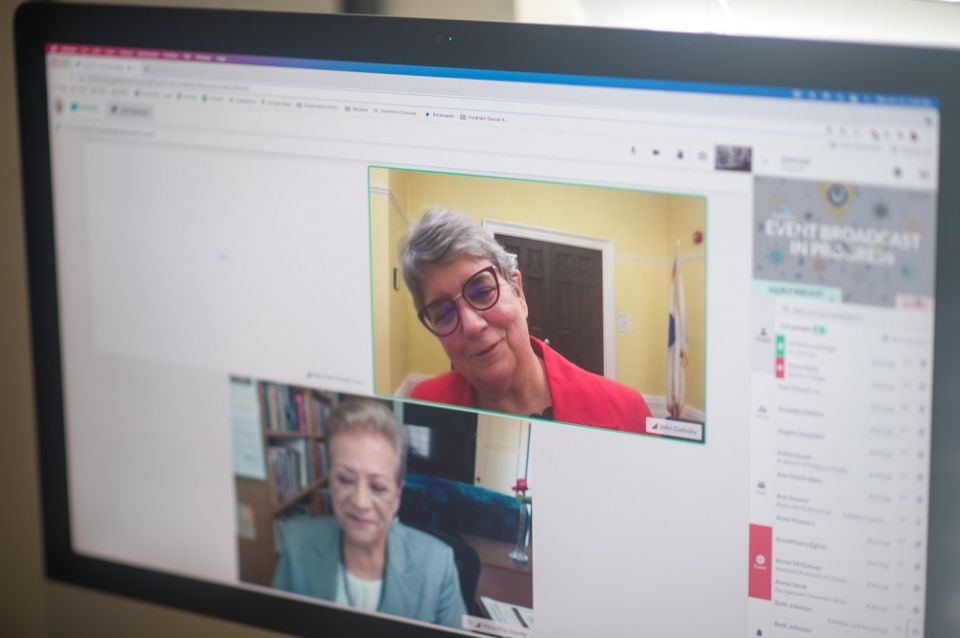 Susan K. Wood of Regis College at the University of Toronto receives the John Courtney Murray Award for a lifetime of distinguished theological achievement at the Catholic Theological Society of America’s virtual convention June 10-13, while CTSA president Maria Pilar Aquina (below) looks on. (Paul Schutz/CTSA)

All three awards presented during the Catholic Theological Society of America's virtual convention this year went to female theologians, including Susan K. Wood of Regis College at the University of Toronto, who received the John Courtney Murray Award for a lifetime of distinguished theological achievement.

Wood, a Sister of Charity of Leavenworth, Kansas, is a professor of systematic theology and an academic dean at Regis. She is known for her pioneering research on French theologian Henri de Lubac, whose ideas helped shape the Second Vatican Council, as well as her work in the areas of ecclesiology, sacraments, liturgical theology, ecclesial ministry, ecumenism and the theology of priesthood.

During the virtual award presentation June 12, CTSA president Maria Pilar Aquino noted that, since 1972, the John Courtney Murray Award — the society's highest accolade — had been given to 39 male theologians, compared to only 10 female ones.

"This year, I am delighted that in recognizing our worthy colleague, we also contribute to rectifying this gender disparity," Aquino said. 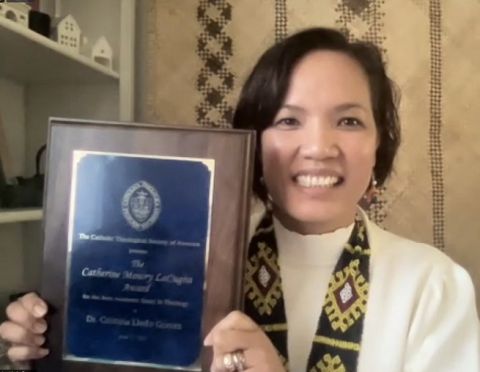 Additionally, the 2021 Ann O'Hara Graff Award was presented June 11 to Susan Abraham, professor of theology and postcolonial cultures at Pacific School of Religion in Berkeley, California. Abraham is also vice president of academic affairs and dean of faculty at the school.

The Ann O'Hara Graff Memorial Award is presented by the Women's Consultation in Constructive Theology to a CTSA member whose accomplishments include scholarship and liberating action on behalf of women in the church and/or the broader community.

Abraham's work weaves practical theological insights from the experience of working as a youth minister for the Diocese of Mumbai, India, with theoretical perspectives from postcolonial theory, cultural studies and feminist theory. She is the author of Identity, Ethics, and Nonviolence in Postcolonial Theory (Palgrave Macmillan, 2007) and Frontiers in Catholic Feminist Theology: Shoulder to Shoulder (Fortress, 2009).

The Catherine Mowry LaCugna Award for New Scholars (for 2020-21) went to Cristina Lledo Gomez for her essay, "Mother Language, Mother Church, Mother Earth." Gomez is lecturer and researcher at the Australian Institute of Theological Education.

Gomez' essay "amplifies the voices of indigenous women to call for a complex notion of mothering that offers insight into how the world can heal from a type of Christianity which has at its foundations patriarchalism, patronism, power-mongering and a colonizing-consumerist mentality," according to the award citation. 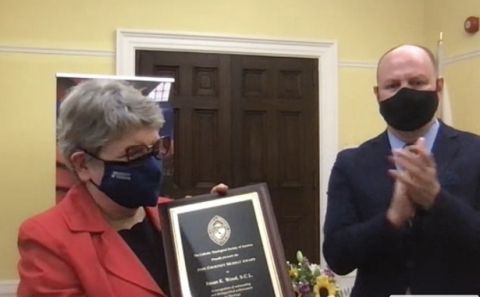 Wood, who received the John Courtney Murray Award in person from John D. Dadosky, past-treasurer of the CTSA, while members watched virtually, was praised for her "distinguished record of contributions to systematic and ecumenical theologies" as well as her "breathtaking record of institutional and academic service."

She is the author of several books, including Spiritual Exegesis and the Church in the Theology of Henri de Lubac (Wipf and Stock, 2010) and Sacramental Orders (Liturgical Press, 2000), as well as more than 100 essays in academic, professional, encyclopedia and pastoral publications. Wood also has co-authored and co-edited official documents for the Lutheran-Roman Catholic Dialogue.

Her ecumenical work has included appointments to the Pontifical Council for Promoting Christian Unity conversations with the Baptist World Alliance, the North American Orthodox-Catholic Theological Consultation, the Faith and Order Commission of the World Council of Churches, and the Center for Catholic and Evangelical Theology.

Born in Washington, D.C., and raised in the Kansas City area, Wood earned a bachelor's degree in English and French, then a master's in French, and moved into theology after 10 years of teaching French in high school and college. She completed her doctorate in systematic theology at Marquette University, where she later served as a professor of theology and chair of the theology department. She also was a professor of theology and associate dean at St. John's University's School of Theology in Collegeville, Minnesota, where she served on the committee on illumination and text for the St. John's Bible project.

In a plenary talk the day before the award presentation, Fr. Charles Curran, a longtime theologian and ethicist who has authored a book on the 75-year history of the CTSA, noted that he was the first recipient of the John Courtney Murray Award.

Previously, the award was named for New York Cardinal Francis Spellman and had been presented by Spellman's successor, Cardinal Terrence Cooke. However, when Cooke learned that Curran — who had publicly dissented from church teaching on artificial birth control — was the recipient, he declined to give the award, Curran said.

"The officers and [CTSA] board then decided they would change the name from the Cardinal Spellman Award to the John Courtney Murray Award, and I became the first recipient," Curran said.

A version of this story appeared in the June 25-July 8 print issue under the headline: Three women honored with awards at annual CTSA convention .