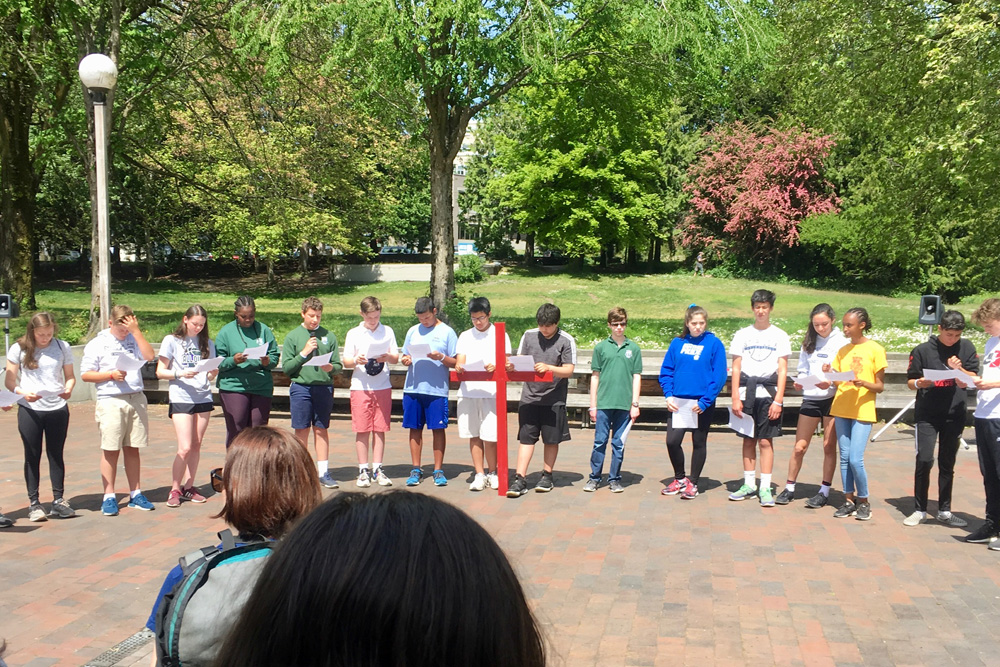 Eighth grade students of Seattle’s Christ the King School read prayers of support for refugees and immigrants May 6 at Seattle’s Gasworks Park as part of an April 29-May 11 pilgrimage in the Seattle Archdiocese. (Courtesy of Vincent Herberholt) 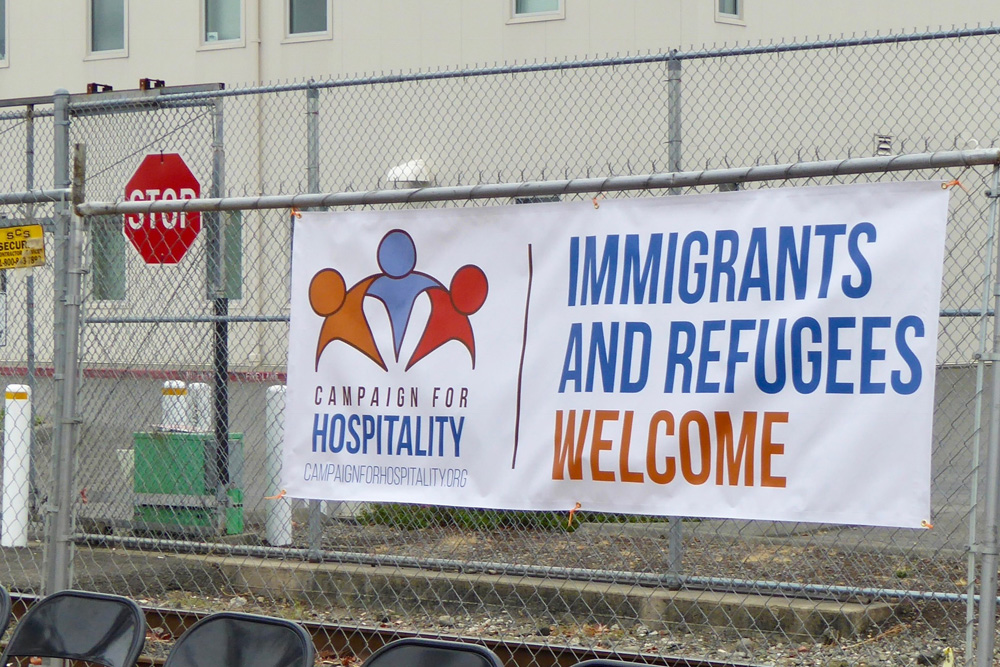 A sign of welcome was attached to fencing surrounding the Northwest Detention Center in Tacoma, Washington, for the May 11 Mass and gathering to mark the end of a two-week pilgrimage in support of immigrants and refugees. (Courtesy of Vincent Herberholt)

A two-week, multi-pronged pilgrimage to demonstrate solidarity with immigrants and refugees converged May 11 from around the Seattle Archdiocese with a call for sustained efforts to address "the suffering and pain of millions of brothers and sisters dying of hunger, or barely surviving in constant fear for their children's future."

A large gathering of pilgrims and supporters took part in a culminating Mass celebrated on the street immediately outside the Northwest Detention Center in Tacoma, Washington, one of the nation's largest immigration holding complexes, with 1,575 beds.

Titled "Walking and Witnessing for Immigrant Families," the pilgrimage began April 29 when individuals and parish groups left from Bellingham in the north, Vancouver in the south and Kirkland to the east. 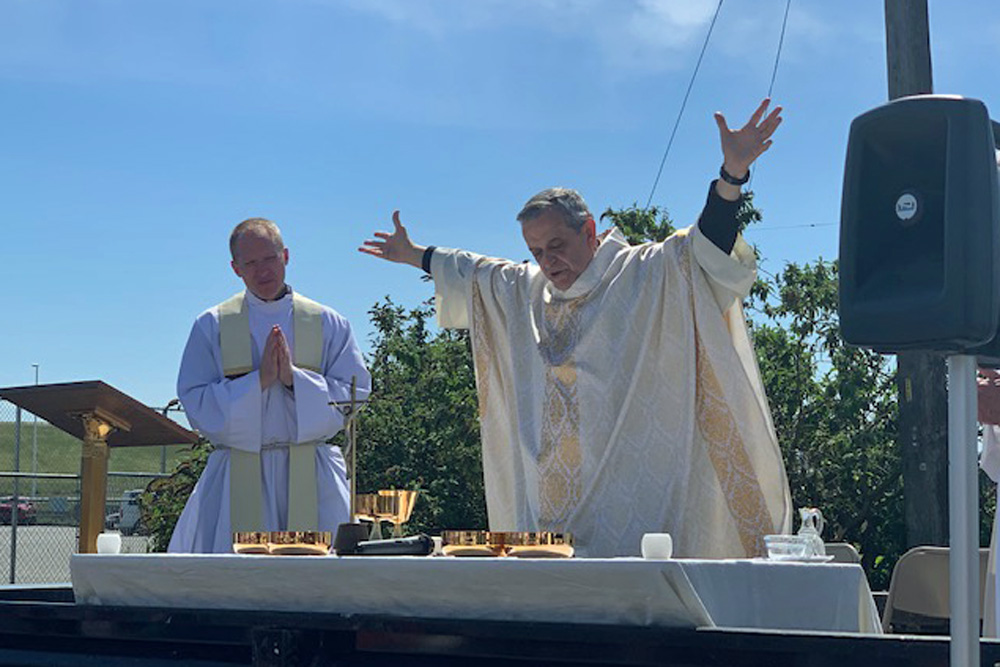 Alluding to immigration and refugee crises around the world as well as at the U.S. border, in his May 11 homily, Seattle Auxiliary Bishop Eusebio Elizondo lauded the pilgrims and exhorted them to "keep on walking towards our brothers and sisters in need of protection, in need of justice, in need of tenderness and compassion." 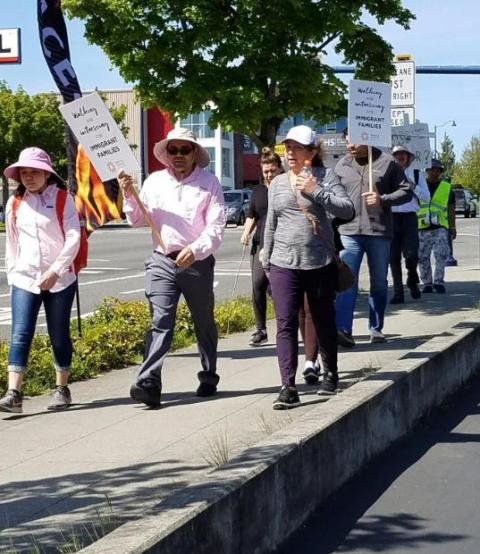 A group of parishioners from St. Thomas More Parish, Lynnwood, Washington, walked nearly 10 miles May 5 to Christ the King Parish in Seattle, one leg of the April 29-May 11 Western Washington pilgrimage to express support for besieged immigrants and refugees. (Courtesy of Vincent Herberholt)

"Sinful viruses of fear, greed, envy, racism and bigotry are continuously distorting the family features in each other, so we can't recognize anymore a man or a woman as a brother or a sister," he said, "pushing us to separate family members, regardless of how innocent and helpless they might be."

The pilgrimage was "not intended to be political in nature, but rather to engage in authentic prayer around the issue, while offering a visible show of solidarity with immigrant families, a way to show our deep care and concern for their difficult situations," said Joe Cotton, an archdiocesan contact person for the event.

"We hope immigrant families have felt a tangible sense of the reality that the church stands with them and cares for them," Cotton told NCR.

The pilgrimage, he added, was registered with "the Share the Journey initiative, and our steps are being included with pilgrims all over the world engaging in similar pilgrimages."

"The individual legs varied, with some legs garnering 150-200 participants while others had 15-20," Cotton said. "One lovely surprise was the inclusion of several Catholic middle school students."

Each of the three routes toward the detention center was broken into segments. Some persons walked one section or more, and "some hearty souls will have walked the entire route," according to Vince Herberholt, a pilgrimage steering committee member. 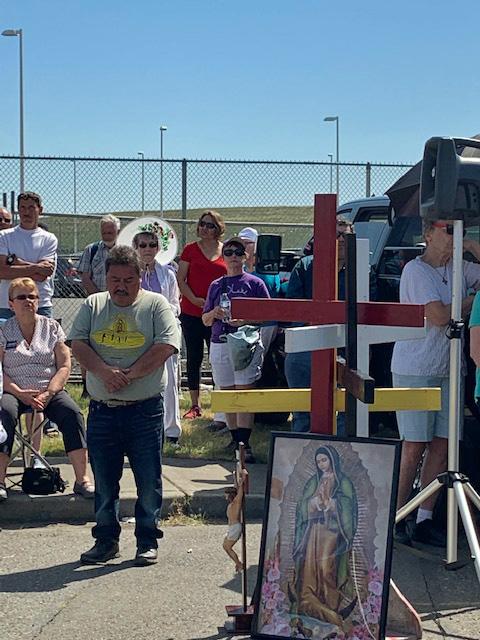 Four crosses painted to correspond to Native American colors associated with direction were carried along the routes of the pilgrimage in Western Washington. The crosses were placed adjacent to makeshift altar of the event’s rite outside the Northwest Detention Center. (Courtesy of Seattle Archdiocese)

Parishes along the paths provided support and hospitality to the pilgrims.

A highlight occurred May 6 when more than 150 participants, including 120 seventh- and eighth-grade students from Christ the King School and St. John Catholic School, walked five miles from Christ the King in North Seattle to Gasworks Park, where the walkers enjoyed lunch and a prayer service led by eighth graders, said Herberholt who posted online photos of the trek.

A parishioner of Church of the Assumption, in Bellingham, constructed four wooden crosses and painted them red, yellow, black and white to correspond with Native American colors related to directions.

Carried varyingly on each pilgrimage route, the crosses were placed together near the closing rite's altar as "a symbol of our unity," Cotton said.

The trek was co-sponsored by the archdiocese, the Washington State Catholic Conference, Catholic Community Services of Western Washington, and the Intercommunity Peace and Justice Center.