Unsung (and underpaid) heroes of the parish 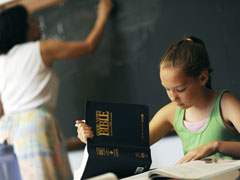 Store shelves are stocked with notebook paper, folders and glue sticks, so it must be time to go back to school. This year my sister will take her first child to college, I will send my last one to preschool, while millions of American families will begin the carpool rotation for everything in between.

It’s also back-to-school time at church. Religious education programs begin in the fall, and directors of religious education have spent their summer vacations finding creative ways to share the good news with kids from 4 to 14. Imagine being in charge of shaping the spiritual lives of the future of our church. What an important job!

Although teachers usually rank near the top of surveys of most admired professions, those who teach religion, as Rodney Dangerfield famously said, “don’t get no respect.” It’s not just the long hours and low pay, though working weekends and holidays for an average salary in the low- to mid-$30,000s is no plus. Despite a dramatic increase in the professional standards required of parish catechetical directors, too often these unsung heroes of the parish are not treated professionally -- by their bosses or by the people they serve.

Horror stories abound about pastors, clergy or diocesan personnel treating directors of religious education poorly, including setting unrealistic expectations, arbitrarily overriding their decisions and even randomly firing them. Almost worse is the increasing number of parents who condescendingly demand changes to the curriculum or accommodations for their child’s sports practice.

“Why can’t my kids have a weekly hour of games and pizza, with 10 minutes of Bible lesson, like the Baptists up the street?” “Could you switch the fifth-grade class to Tuesday nights so my son can have his favorite teacher?” “I’m going to be a half-hour late picking up my child because I have a hair appointment.”

Not to mention parents who refuse to volunteer, to contribute financially for extras and -- here’s the kicker -- to accompany their own kids to Mass and other sacraments to reinforce what the young ones are learning in what used to be called Sunday school.

If we did, directors of religious education -- DREs -- would be making as much as principals, and kids would say “teach religion” when asked what they want to do when they grow up. Or at least people would have heard of them: When I mentioned on Facebook that I was writing about DREs, one Catholic friend wondered why I cared about rapper Dr. Dre! (I’m hoping she was kidding.)

So why do thousands of people -- mostly women -- put up with such working conditions? Of course, most stay because they love the church and feel called to the ministry of helping young souls discover Jesus.

But with the priesthood and diaconate currently closed to women, religious education director is also one of the few parish ministry positions open to the thousands of laywomen who have earned graduate theological degrees.

In fact, 88 percent of religious educators are women, according to the Center for Applied Research in the Apostolate’s National Parish Inventory and Catholic Ministry Formation database.

And with 68 percent of parishes employing a catechetical ministry director or coordinator, it is the most common parish position for a layperson, after parish secretary, says another CARA report, “Emerging Models: The Changing Face of U.S. Parishes.”

The U.S. bishops believe that the “single most critical factor in an effective parish catechetical program is the leadership of a professionally trained parish catechetical leader,” according to the National Directory for Catechesis. A director of religious education is expected to have a deep spirituality and respect for the tradition of the church, superb administrative and organizational skills, and a small mortgage and few living expenses. In addition, she must possess the ability to choose curriculum, cajole parishioners into volunteering as teachers, deflect criticism from parents with grace -- oh, and leap tall buildings in a single bound.

When I think of the DREs and catechetical leaders I’ve met, that pretty much describes them. They are some of the most educated, talented and dedicated women (and men) in our church. Even my own experience of religious education as a member of the “lost generation” of the 1970s was positive, and indeed a big part of why I do the work I do today.

A few years ago at an anniversary celebration for my home parish, I ran into the woman who served as the director of religious education when I was growing up. She remembered me and was proud I had grown up to serve the church as a journalist. I thanked her for the work she did to teach me the basics of the faith and for modeling an inclusive, justice-driven church.

On Sept. 18, parishes will celebrate Catechetical Sunday, usually by commissioning religious ed teachers and giving them a thank-you round of applause. If you don’t already know your DRE, find her and thank her for all her hard work. Better yet, tell her regularly -- and lobby the pastor to pay her more.

[Heidi Schlumpf is the editor of The Notre Dame Book of Prayer (Ave Maria Press).]

Unsung (and underpaid) heroes of the parish