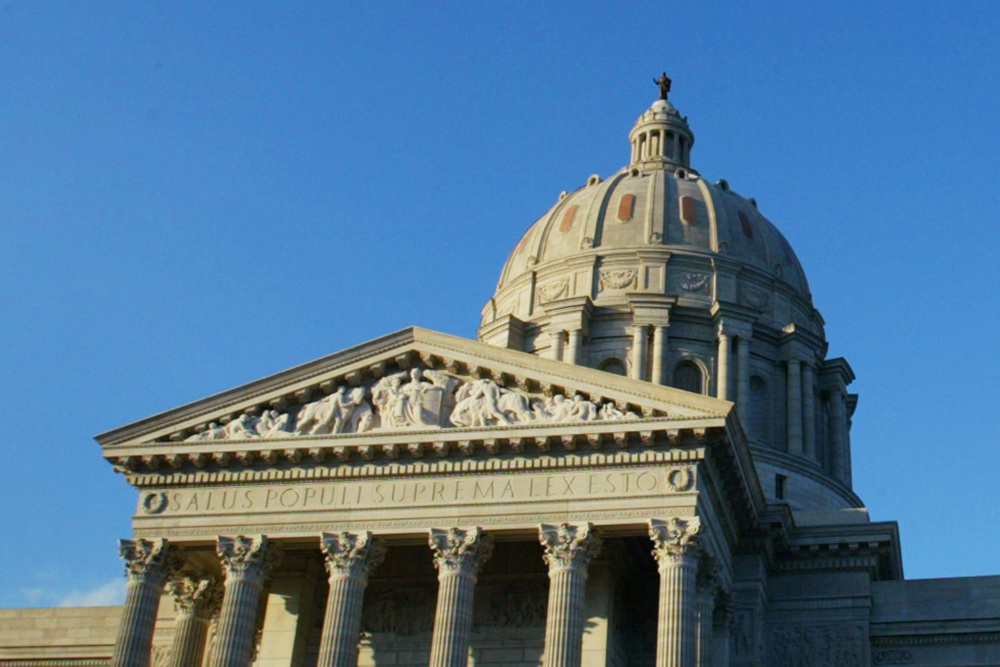 The Missouri Statehouse is pictured in Jefferson City, Mo., in this 2004 photo. The Missouri House has voted in favor of a bill to ban abortions after a fetal heartbeat is detected. (CNS/Reuters/Mike Segar)

The Missouri House of Representatives Feb. 27 passed the Missouri Stands for the Unborn Act, an omnibus bill that bans abortion when the heartbeat of an unborn child can be detected, which could be as early as six weeks "depending on the method used."

The measure, H.B. 126, also limits late-term abortions after five months of pregnancy; declares the state of Missouri a "sanctuary of life"; bans abortions based on sex, race or Down syndrome; and requires abortion doctors to have adequate malpractice insurance.

"The United States is one of only seven nations – including China and North Korea – that allow abortion on demand through the moment of birth," she said in a statement. "Ultimate passage of this compassionate bill would make Missouri the 21st state to stop cruel late-term abortions and enact some of the strongest protections in the country for unborn children and their mothers."

In Indiana, a bill banning second-trimester abortions has moved to the state Senate.

In Tennessee, a bill to ban most abortions once a fetal heartbeat is detected will be taken up by the full House. The American Civil Liberties Union has already said it will file a lawsuit to stop implementation of the measure if it becomes law.

Some pro-life supporters, including Tennessee Right to Life and the state's Catholic leaders, have not backed the measure because they are worried about an expensive legal battle that could ensue, leading to a defeat of the measure and hurting other pro-life efforts.

"We believe that the sanctity of human life must be respected and protected absolutely from the moment of conception to natural death," they wrote. "So while we wholeheartedly support the intention of the 'Heartbeat Bill' being considered by the Tennessee Legislature, we must also be prudent in how we combat the pro-abortion evil that dwells in our society."

Various forms of "heartbeat" measures have been passed in legislatures across the country and have been "consistently struck down by state and federal courts alike for being unconstitutional, they said. As a result the "pro-abortion" plaintiffs win," they continued, "and we must remember that every pro-abortion victory in the courts further strengthens the Roe v. Wade precedent and makes Roe that much more difficult to overturn."

The better course, they said, is to support the "Human Life Protection Act" being considered within the Legislature that would automatically ban abortions in Tennessee "should the Roe v. Wade Supreme Court decision be overturned."

It was signed by Bishop Richard Stika of Knoxville and Bishop Mark Spalding of Nashville and Archbishop Joseph Kurtz, apostolic administrator of the Diocese of Memphis. Archbishop Kurtz heads the Archdiocese of Louisville, Kentucky.

The Tennessee Catholic leaders noted the "unjust laws recently signed in New York and considered in Virginia" to allow abortion up to birth. More than a dozen other states are considering similar measures, including Vermont.

The abortion bill working its way through the Vermont Legislature "goes too far," said Bishop Christopher Coyne of Burlington in early February. The proposal, H. 57, "goes far beyond Roe v. Wade, by guaranteeing unrestricted abortion through all nine months of pregnancy."

This, he added, "means that a baby in the womb can be terminated right up to the moment of natural birth. My friends, that is not abortion. That is infanticide."