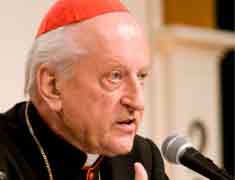 The projected cost of a three-year study of U.S. women religious congregations is $1.1 million and Rome has asked the U.S. bishops to provide funds to offset these expenses, according to a letter by Slovenian Cardinal Franc Rodé, head of the Vatican’s Congregation for Institutes of Consecrated Life and Societies of Apostolic Life, and obtained by NCR.

“We have a projected budget of $1,100,000 for the three years which the total work of the apostolic visitations will require,” Rodé wrote in a July 14 letter. “I am asking you, my brother bishops, for your help in offsetting the expenses which will be incurred by this work for the future of apostolic religious life in the United States.”

In an interview last July with Catholic News Service, Mother Mary Clare Millea, superior general of the Apostles of the Sacred Heart of Jesus, chosen by Rodé to be apostolic visitator and head of the investigation, declined to discuss costs or funding. However, Millea told CNS that the U.S. Conference of Catholic Bishops would not be funding the effort.

“Anyone who has contributed has not wanted their name to be publicized,” she said. “The [Vatican] congregation is conducting the visitation so they're ultimately responsible for financing it,” she said. “We have a project that is going to last three years. We are welcoming the support of individual dioceses, individuals or groups who would be willing to help defray the expenses.”

Rodé’s July letter came in the form of a general appeal to U.S. bishops. It was addressed: “Your Eminence/Your Excellency” and began with an explanation: “My dear brother bishops in the United States, as you are aware, His Holiness Pope Benedict XVI, in an audience on Nov. 17, 2008, authorized an apostolic visitation of the principal institutes of apostolic women religious in the United States.”

His letter went on to say, “We count on your support in this effort to:

The letter said, “May I suggest that the donations you wish to make be sent to the Congregation for Institutes of Consecrated Life and Societies of Apostolic Life, 00120 Vatican City State, Europe. Please specify that it is to be used for the ‘Apostolic Visitation of Institutes of Women Religious in the United States.’ ”

Since the Vatican announced the investigation it has had both supporters and critics among women religious. Those favoring the study point to a decline in numbers among women religious as well as a relative independence from Rome as they carry out their apostolic missions. Those critical of the study say it is unnecessary, demeaning, deflects focus from more pressing problems among the clergy, and is being carried out in secrecy. When the Leadership Conference of Women Religious, an umbrella organization for 95 percent of U.S. women religious, met in New Orleans in August, it called upon the Vatican to be transparent in conducting the study and open in sharing results before any recommendations are made.

The Vatican apostolic visitation working paper, officially called an instrumentum laboris, specifies that Millea is to be responsible for transmitting a detailed and confidential report to the Vatican congregation upon completion of the study.

The investigation has several phases: The first phase, which ended July 31, involved interviews with religious superiors. The second calls on congregation heads to fill out and return quantitative and qualitative questionnaires relating to congregational religious life. These questionnaires were mailed out in mid-August and congregation heads have until Nov. 1 to return them to Millea. The third phase, likely the most costly of the study, calls for on-site team visits to select congregations. These are to be conducted by teams consisting of vowed religious appointed by Millea, with the approval of the Vatican.

There are 341 religious institutes of women in the United States with approximately 59,000 women religious. Communities of cloistered, contemplative nuns are not officially part of the study.

Thomas C. Fox is NCR editor and can be reached at tfox@ncronline.org.