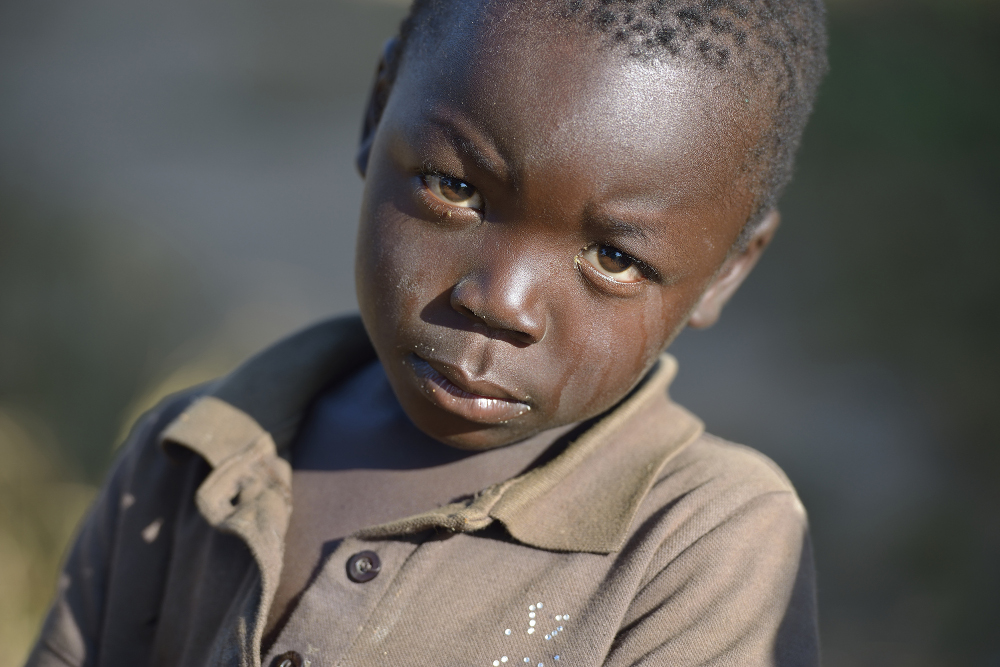 A boy looks into the lens of a camera in 2017 in Jombo, Malawi. With assistance from the AIDS program of the Church of Central Africa Presbyterian, a sexual and reproductive health club for children and youth operates in the village. (CNS/Paul Jeffrey)

An initiative to identify and properly treat children living with HIV has gained new momentum as international organizations and pharmaceutical companies respond to a Vatican push to look past profit to doing the right thing.

Few children in the developed world get infected with HIV anymore, so there's little market for drug makers to earn a return on their investment. Children do get infected in poor countries, however, but there's little profit to be made selling them drugs.

In 2016, he convened the first of several meetings within the Vatican's Pontifical Academy of Sciences, bringing church leaders, international health officials and CEOs of some of the largest drug companies into the same small room where it was hard to hide.

"It's like being sent to the principal's office. Everybody has to show up and stand before Cardinal Turkson and Father Bob," said Sandra Thurman, chief strategy officer for the President's Emergency Plan for AIDS Relief, a U.S. government program that funds AIDS response around the globe.

She was referring to Cardinal Peter Turkson, prefect of the Dicastery for Promoting Integral Human Development and Msgr. Robert Vitillo, secretary general of the International Catholic Migration Commission and long the Vatican's point man on HIV and AIDS.

"We were lagging on a pediatric AIDS response, but we've finally gotten traction because of this incredible Vatican initiative," she added.

"Children have always been the missing link in the AIDS response," said Stuart Kean, a consultant to the World Council of Churches, which supports the Vatican initiative.

"Getting children onto the agenda has been difficult because they're not physically here and they're not making noise. So it's other people who have to speak up for them. Which is why the meetings in Rome are great. We finally got all the people who need to listen into the same room," Kean said.

The initial focus of the meetings, according to Vitillo, was to get antiretroviral drugs that treat HIV into formulations that work for children.

"We now have some dosages and formulations which are more child-friendly, but some of the most important medications still need to be refrigerated, and you don't have a regular supply of electricity in many countries. Some of the formulations taste terrible, so children won't tolerate them. Some companies have begun to develop what they call sprinkles, like granulated sugar, and you can mix it with porridge. We need more of that," Vitillo told Catholic News Service.

In the last year the series of Rome meetings has expanded to include manufacturers of diagnostic devices that allow for a quick diagnosis of a child's status.

"We now have machines at testing sites which return test results in about 90 minutes, instead of the average of 50 days it takes when they send a blood sample off to be tested somewhere else," explained Chip Lyons, president and CEO of the U.S.-based Elizabeth Glaser Pediatric AIDS Foundation.

Lyons, who has participated in the Rome meetings, helped get 1,700 diagnostic machines placed at clinics and testing sites in eight African countries, many of them in church-run facilities.

"Going from 50 days to zero days to get the results is a really big deal," Lyons said. "That means immediate counseling and initiation of ARVs (antiretroviral drugs) for the child. The difference for the caregiver, usually the mom, is dramatic. She gets the meds right away that she and her infant need, instead of coming back several times over two or three months."

The diagnostic machines in the foundation's pilot program are all located in sub-Saharan Africa, home to 86 percent of the world's HIV-positive children and adolescents. In West and Central Africa, 80 percent of infected children are not receiving any antiretroviral therapy. And it's getting worse. The number of 15- to 19-year-olds dying of AIDS in West and Central Africa increased by 35 percent between 2010 and 2016, even while it fell elsewhere in Africa.

Yet it's not just Big Pharma that has to up its game. The Vatican meetings have also pushed the church to fight harder against the stigma and discrimination that can be just as deadly as the virus.

"Stigma is very high in West and Central Africa. There are clinics with space, but the people aren't there," said Deborah Von Zinkernagel, director of the Community Support, Social Justice and Inclusion Program for the United Nations Joint Program on HIV/AIDS.

"Religious leaders getting publicly tested and speaking from the pulpit about HIV will go a long way in breaking down the barriers to testing and treatment," she said.

At a meeting in the Vatican last November, participants adopted a 41-point "Rome Action Plan" with specific milestones for corporations and international organizations. A monitoring group meets monthly and updates a public website displaying progress toward those goals. Another meeting in December will discuss what more needs to be done.

"We are constantly monitoring progress. We try to tick the boxes to see what has happened and not happened and figure out how to follow up. We still don't have all the formulations we need for children, drugs that kids want to take and mothers can easily give. There are some companies we need to push harder," said Gottfried Otto Hirnschall, director of the World Health Organization's Department of HIV/AIDS.

"The power of this mechanism is that we can point out commitments and publicly say, 'You've done this but not this.' In the next meeting in Rome, we will push even more. We'll lock people up in that beautiful room again, and they'll be held to account," he said.

"This isn't about coming together and making nice promises. It's about accountability. That's the power of the mechanism that the church has put in place."