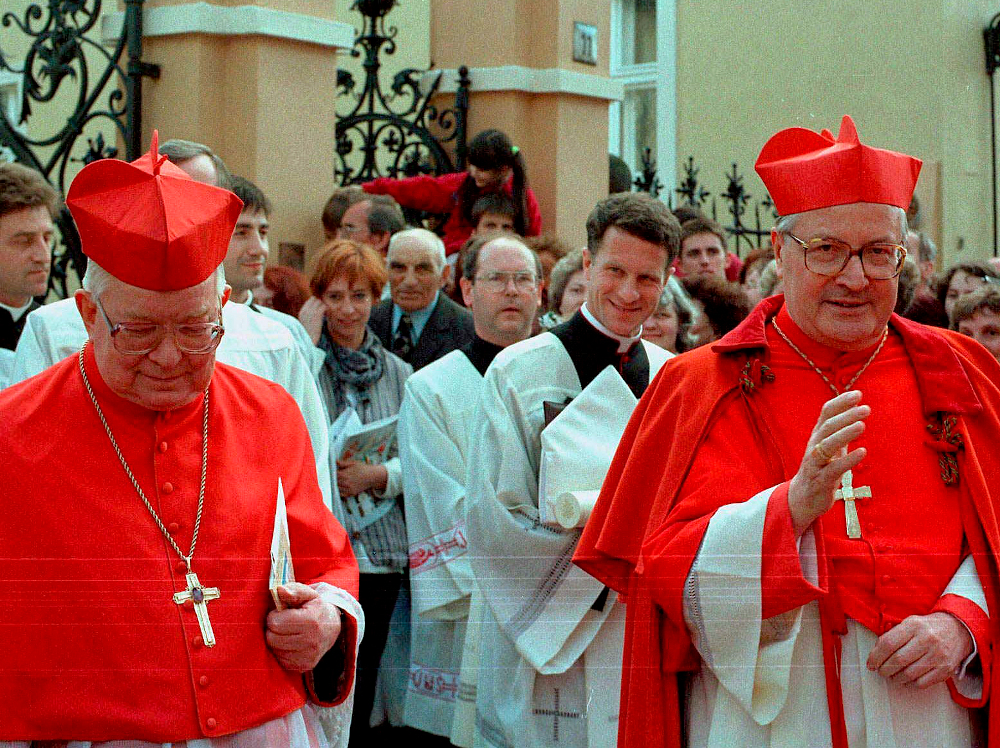 This Sunday, May 25 1997 file photo shows Wroclaw Metropolitan Cardinal, Henryk Gulbinowicz, left, and Legate of the Holy See Cardinal Angelo Sodano on their way to Wroclaw cathedral, in Poland. The Vatican has imposed sanctions on now-retired Polish cardinal Gulbinowicz after he was implicated in an alleged case of sexual abuse and in allegedly covering up abuse in another case. The Vatican’s embassy in Poland said Friday, Nov. 6, 2020 that Gulbinowicz, 97, has been forbidden from using his bishop’s insignia and participating in any religious celebrations or public events. (AP Photo/Adam Hawalej, file)

The Vatican has imposed sanctions on a prominent Polish cardinal, retired Archbishop Henryk Gulbinowicz, after he was accused of sexually abusing a seminarian and of covering up abuse in another case.

The Vatican’s embassy in Poland said Friday that Gulbinowicz, the 97-year-old retired archbishop of Wroclaw, has been forbidden from using his bishop’s insignia and participating in any religious celebrations or public events. The once well-respected cardinal, who supported Poland's pro-democracy Solidarity movement in the 1980s, has also been denied the right to have a cathedral burial service or to be buried in a cathedral.

A spokesman for the Church authorities in Wroclaw said the severity of the Vatican's decision suggests the various allegations have been confirmed.

The embassy statement shows that “there were in the past people who were wronged in the Wroclaw church and, out of respect for these victims, they are owed the words ‘I apologize,’" said spokesman Mgr. Rafal Kowalski.

The sanction against Gulbinowicz appeared similar to that imposed on the former archbishop of the U.S. Pacific island territory of Guam: The Vatican last year upheld its conviction of Archbishop Anthony Apuron for sexually abusing minors and ordered him exiled him from Guam and barred him from presenting himself as a bishop.

Gulbinowicz was also ordered to pay a “certain amount of money” to a Polish church charity that supports victims of sexual abuse.

He is the latest Polish prelate to be sanctioned after a Vatican-mandated investigation into allegations of sexual misconduct. The reckoning has rocked the Catholic hierarchy in predominantly Roman Catholic Poland, where the clergy have long been held in high esteem and St. John Paul II, the Polish pope, remains a figure of national pride.

In 2004, St. John Paul II accepted the resignation of 80-year-old Gulbinowicz from his role as Wroclaw Archbishop.

The embassy's statement said the sanctioning decisions were taken as a “result of an investigation into accusations made against Card. Henryk Gulbinowicz and after an analysis of other allegations” concerning the cardinal.

Last year, criminal prosecutors in Wroclaw opened an investigation into allegations against Gulbinowicz concerning sexual abuse of a seminarian in the 1980s, but they dropped the case because too much time had passed.

Gulbinowicz was also cited in a recent video documentary in Poland, called “Tell No One,” about predator priests and coverup efforts which alleged that Gulbinowicz saved a priest suspected of abuse of minors from arrest by vouching for him.

Before that, Francis in 2015 revoked Scottish Cardinal Keith O’Brien’s rights and privileges of being a cardinal after unidentified priests alleged sexual misconduct. O’Brien was, however, allowed to retain the cardinal’s title and he died a member of the College of Cardinals.

More recently, Francis revoked the rights and privileges of an Italian Cardinal, Angelo Becciu, but not for sexual misdeeds: Becciu, who headed the Vatican’s saint-making office, is accused of embezzling Holy See money while he was the No. 2 in the Vatican’s secretariat of state. He denies wrongdoing.

Francis’ willingness to sanction cardinals for wrongdoing is remarkable given the so-called “princes of the church” have long been considered untouchable and unaccountable.