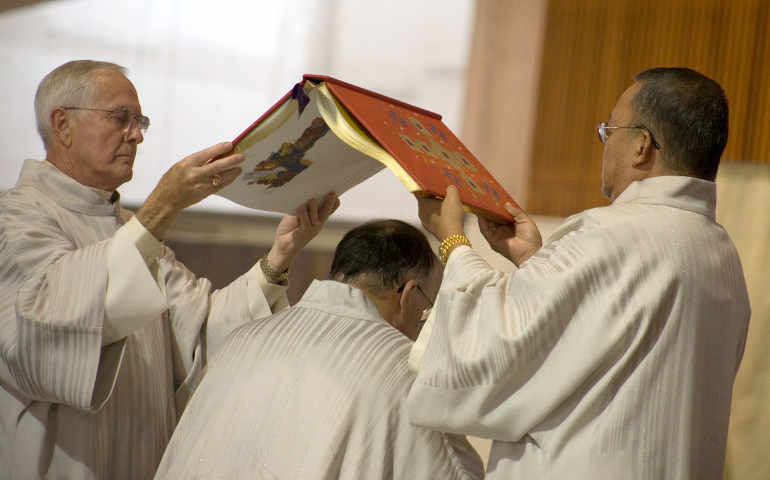 The Book of Gospels is held over Auxiliary Bishop Robert W. McElroy during his ordination Mass at St. Mary's Cathedral in San Francisco in 2010. Pope Francis said bishops should “charm [the world] with the beauty of love [and] seduce it with the freedom bestowed by the Gospel."

Pope Francis on Thursday re-emphasized his vision of who should be chosen as Catholic bishops around the world, telling the Vatican office responsible for their selection he wants prelates who are "genuine pastors" and who will "argue with God on behalf of [their] people."

In a nearly 3,000-word text to the Vatican's Congregation for Bishops, Francis tells the office they should not look for bishops based on any "preferences, likes, or trends" and likewise should not seek prelates who are mainly concerned with doctrinal matters.

The church, writes Francis, needs "guardians of doctrine not so as to measure how far the world is from doctrinal truth but to appeal to the world to charm it with the beauty of love [and] to seduce it with the freedom bestowed by the Gospel." *

"The church does not need apologists of its causes nor crusaders of its battles, but sowers humble and confident of the truth, who ... trust of its power," the pontiff continues.

Francis' words Thursday, made during the congregation's weekly meeting, mostly reaffirm themes the pope has touched on over the past year when speaking of the role of bishops around the world.

But they are also quite direct in parts, seemingly at one point even reprimanding the congregation for its choices so far with a remark that "perhaps it is we who do not turn enough the fields to look" for the right bishops.

Under the Vatican's process for picking bishops, the papal ambassador, or nuncio, in each country is responsible for compiling a list of names of candidates, called a terna, for openings as they arise. That terna is then submitted to the Congregation for Bishops, whose members vote on the final list to be submitted to the pope.

In his text Thursday, which was released by the Vatican only in Italian, Francis invites the congregation to review the teachings of the early church to "look for some criteria" in choosing bishops.

The pope asks them particularly to consider how the apostles chose a replacement for Judas, following his betrayal of Christ.

"The bishop is first and foremost a martyr of the risen one," the pope states. "His life and his ministry must make credible the resurrection."

"The courage to die, the generosity of offering their own lives and to be consumed by the flock are inscribed in the "DNA" of the episcopate," he continues. "Renunciation and sacrifice are akin to the Episcopal mission."

The central prayer of a bishop, the pope tells the congregation, should be for the salvation of his people.

Recounting the Old Testament story of Sodom, when Abraham negotiated with God not to destroy the city if there could be ten righteous people found within its boundaries, Francis says bishops must be "courageous in intercessory prayer as Abraham."

"A man who lacks the courage to argue with God on behalf of his people can not be bishop - I say this from the heart, I am convinced," he states.

Referencing an address he gave to papal nuncios last June -- when the pontiff told them he wanted them to find bishops who are "close to the people, fathers and brothers" -- Francis states: "I repeat that the church needs genuine pastors."

Mentioning the Second Vatican Council's constitution of the church, Lumen Gentium, the pope also asks the congregation to develop a document on the need of a bishop to reside in his diocese and be near his people, perhaps even limiting his trips away.

"In this time of meetings and conferences ... it would nice if the Congregation of Bishops wrote something about this," states the pope.

"The flock need to find space in the heart of shepherd," writes the pope. If a bishop is not anchored, the pope states, the bishop "will be constantly buffeted by the waves in search of ephemeral compensation and will not offer any shelter to the flock."

Concluding his text, the pope states: "At the end of my words, I wonder: where can we find such men? It is not easy. Are there [such men]? How to select them?"

Referencing the Old Testament story of Samuel in search of a successor for Saul, the pope replies: "I am sure they are there, because the Lord does not abandon his church."

"Perhaps it is we who do not turn enough for the fields to look for them," the pope states. "Perhaps we need the warning of Samuel, "Do not sit down to eat before he comes here." "It is this holy restlessness that I would like this congregation to live."

*The quote has been changed due to a translation error in the original story.