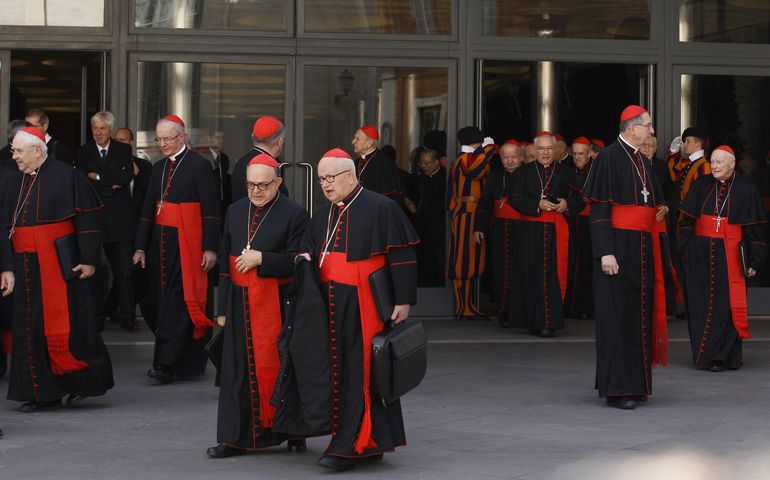 Cardinals leave a meeting with Pope Francis in the synod hall Feb. 21 at the Vatican. (CNS/Paul Haring)

Vatican City — Prelates among the 150 cardinals taking part in closed sessions with Pope Francis this week to reconsider the Catholic church's family pastoral practices said Friday the pontiff is appealing for discussion in a process that has been "misunderstood."

Because it is not possible for people from separate nations to know the specifics of what's happening in each country around the world, French Cardinal Paul Poupard said, the prelates hope their meetings "help us find dialogue, without which we are in civil war."

Approximately 185 cardinals are expected in Rome by Saturday, when Francis will induct 19 members into their ranks in a formal ceremony known as a consistory.

While the topics of discussion for the meeting are known, official texts of the cardinals' remarks are not being made public. Vatican spokesman Jesuit Fr. Federico Lombardi provided overviews for reporters in briefings Thursday and Friday.

After a two-hour presentation by German Cardinal Walter Kasper on the topic of family life Thursday morning, Lombardi said Friday, 43 other cardinals also made remarks, known as interventions.

Among the key topics, the spokesman said, is how to treat Catholics who divorce and remarry and still seek to receive the sacraments. The cardinals, he said, addressed the "canonical problems" faced by those who seek annulments of their marriages and how to "simplify" those problems.

The cardinals are discussing the issue of family life this year as a step in preparation for a global October meeting of bishops, known as a synod, which has the theme "Pastoral Challenges of the Family in the Context of Evangelization."

In the fall, the synod office, led by Cardinal-designate Lorenzo Baldisseri, sent a 40-question questionnaire to individual bishops around the world, asking them to distribute the questions "as widely as possible."

Among the topics: the Catholic teaching prohibiting the use of artificial contraception, the possible ability of a divorced Catholic to remarry or receive Communion, and the number of young people who choose to live together before marrying.

Chicago Cardinal Francis George said in an interview Friday with the Vatican Insider website, run by Italy's La Stampa daily, that while the idea of the synod was good, "its purpose was misunderstood."

"Not enough time was given to do the job correctly," George said. "And the questionnaire was not able to be used, even by people who truly wanted to contribute to the discussion."

Referring to a planned second synod meeting in 2015, George said: "The situation will be saved if they use the year between Synods to create a more user-friendly instrument and give us time to make it more widely available."

While Poupard said inside the Thursday meetings, Francis made an "appeal for dialogue" among the cardinals on the separate issues of discussion, Philippine Cardinal-designate Orlando Quevedo said the pontiff did not intervene much in the other cardinals' remarks.

"[The pope] doesn't say much," said Quevedo, who heads the Philippines' Cotabato archdiocese. "He just listens. But he sets a direction."

Quevedo, speaking at a press conference at the Pontifical Filipino College, also said while different cardinals sometimes raise different points or have subjects of disagreement, the entire college "seemed to work as one."

"Despite our differences, the Holy Father has asked for our help," he said.

Other topics Lombardi said were included in the cardinals' discussions:

The presidents will rotate responsibility in running the sessions of the Oct. 5-19 synod.