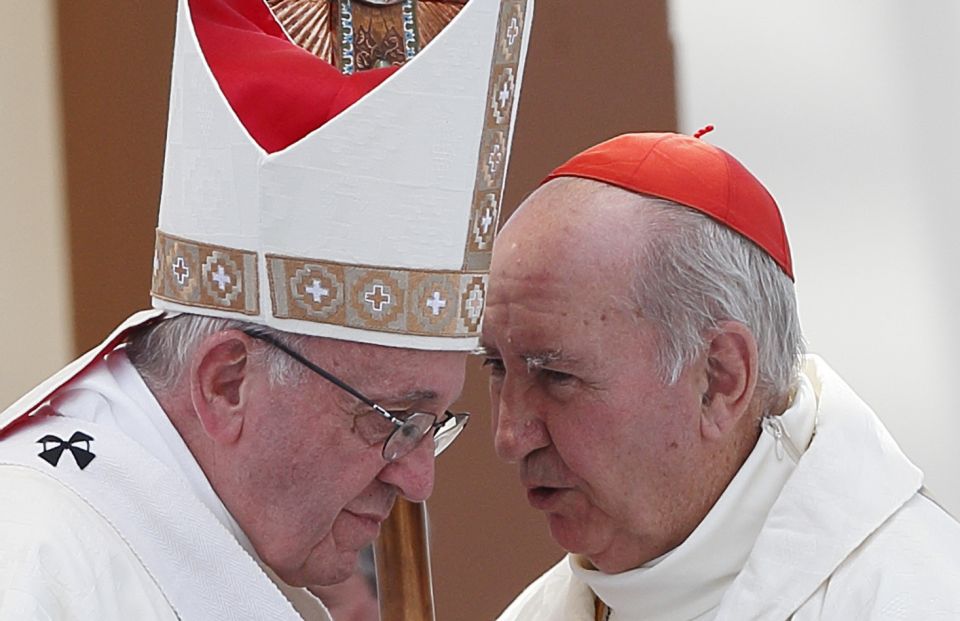 Pope Francis talks with Chilean Cardinal Francisco Javier Errazuriz Ossa, retired archbishop of Santiago and a member of the pope's Council of Cardinals, as they leave after a Mass in Iquique, Chile, Jan. 18. The pope has accepted the resignation of three Chilean bishops following a Vatican investigation into clerical sexual abuse and cover-up. (CNS/Paul Haring)

In an interview Nov. 14 with Chilean radio station, Radio Cooperativa, Errazuriz said he recently met with Francis in Rome to "bid farewell to the pope and to thank him for the fruitful work he entrusted to us to reform the Roman Curia."

The 85-year-old Chilean cardinal said he thanked the pope for appointing him to the Council of Cardinals, also known as the C9, despite being well beyond the usual age "members of the pontifical councils" are nominated.

"The exception was an unexpected sign of appreciation," the cardinal said.

The cardinal insisted it was not true that he resigned due to reports he allegedly mishandled sexual abuse cases in the Archdiocese of Santiago, but that instead, "the term for which I was named had ended."

Chilean prosecutors are currently investigating possible cover-ups of abuse cases by senior members of the clergy, including Errazuriz and his successor, Cardinal Riccardo Ezzati.

Sergio Moya, lead prosecutor in Rancagua, told journalists Nov. 14 that Errazuriz was issued a subpoena regarding the possible cover-up of sexual abuse of a minor in 2005 by Fr. Jorge Laplagne, a priest of the Santiago archdiocese.

"He was subpoenaed as a defendant charged with cover-up," Moya said.

The Chilean prosecutor's office in Rancagua issued a similar subpoena to Ezzati July 24 after conducting several raids of diocesan offices in Rancagua and Santiago.

Although Ezzati had said that he would cooperate with authorities in their investigation, he invoked his right against self-incrimination until authorities "issue a ruling on the request for a definitive dismissal" of the charges against him, prompting outrage among survivors of clergy sexual abuse in the country.

Moya made the announcement of Errazuriz's subpoena after a nearly 4-hour interrogation of retired Bishop Juan Barros of Osorno.

Barros is accused of witnessing and covering up abuse by his mentor, Fernando Karadima, who was expelled from the priesthood by Francis Sept. 28.

In an interview with Radio Cooperativa, Juan Carlos Cruz, a survivor of abuse by Karadima, hailed Errazuriz's exit from the Council of Cardinals as well as the subpoena issued by Rancagua's lead prosecutor.

"Today, there is good news for survivors and bad news for Errazuriz, but it is good enough. So, I am very happy," Cruz said.

Religions that do not pursue peace are a contradiction, pope says