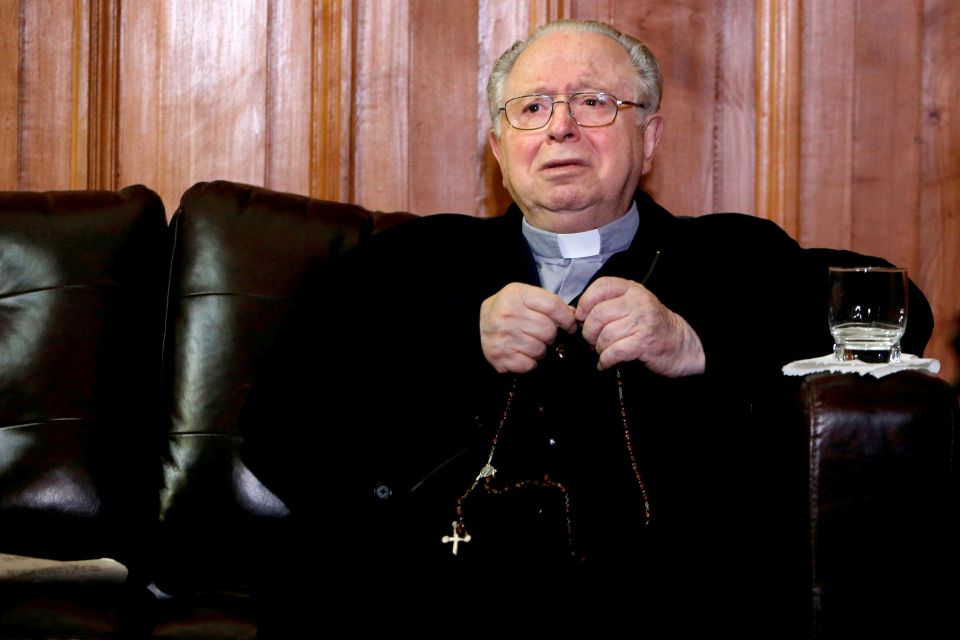 Chilean Fernando Karadima, the defrocked priest at the heart of a sexual abuse case that rocked Chile's Catholic Church, died of natural causes July 25, 2021. He was 90. He is pictured with a rosary inside the Supreme Court building in Santiago Nov. 11, 2015. (CNS photo/Carlos Vera, Reuters)

Lima, Peru — Defrocked priest Fernando Karadima, at the heart of a sexual abuse case that rocked Chile's Catholic Church, died of natural causes July 25. He was 90.

Karadima was a parish priest in an upscale neighborhood in Santiago, Chile's capital. Allegations against him first surfaced in the 1980s, but the case was made public in 2010, when three men came forward about sexual abuses.

The Archdiocese of Santiago released a brief statement about Karadima's death July 26, "asking our merciful God to heal the pain caused to all who have suffered."

The three men who initially came forward, Juan Carlos Cruz, James Hamilton and José Andrés Murillo, released a statement on social media after Karadima's death. They lamented the culture of abuse and cover-up in the church and vowed to continue to work on behalf of victims.

We are at peace, and we are only moved to continue fighting so that these crimes do not happen again," they stated.

A diocesan priest, Karadima was condemned in 2011 by the Congregation for the Doctrine of the Faith and banned from contact with congregants. Chile's legal judicial system, however, ruled while the sexual abuse had occurred, the statute of limitations had passed, and Karadima could not be jailed. While it did not sentence Karadima, the court system eventually ordered the Chilean church to compensate the victims.

The case continued to roil the church in Chile, with hundreds of other investigations launched. Pope Francis intervened in 2018 after a papal visit to Chile, expelling Karadima from the priesthood. In an unprecedented move because of the magnitude of accusations of abuse cover-up, Chile's 34 bishops submitted their resignations.

In a separate case, Santiago Cardinal Ricardo Ezzati stepped down in 2019 after being accused of covering up at least five cases of sexual abuse by members of the clergy, including the former chancellor of the archdiocese, Father Oscar Muñoz. Chile's justice system launched a civil investigation of the charges.

Archbishop Celestino Aós took over the Santiago Archdiocese, tasked with sorting through the cases and starting the process of healing. He was elevated to cardinal last year.

The mystery of God's fatherly love is a great revolution, pope says