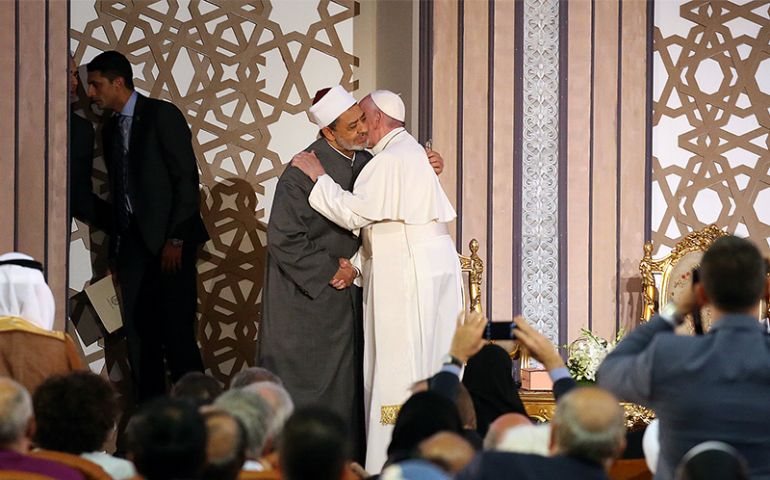 Rome — The global growth of Islam and in particular the rise of Islamic extremism have forced recent popes to set out, with increasing urgency, a strategy for engaging the religion.

As Pope Francis' brief trip to Egypt over the weekend demonstrated, the most recent pontiffs have come up with starkly different approaches — though it's not yet clear if one is better than the other, or if either will be effective.

When Pope Emeritus Benedict XVI addressed the question of Islamic extremism he did so during a speech at a university in his Bavarian homeland where, as a priest and professor, Joseph Ratzinger had worked decades earlier.

That 2006 address in Regensburg, Germany, was a theological master class on the relationship between faith and reason. But it also angered Muslims who object to Benedict citing a 14th-century Christian emperor who claimed that the Prophet Muhammad had only brought the world things that were "evil and inhuman."

Moreover, Benedict also delivered his message to Islam from afar.

Francis, on the other hand, has made it his business to try to build bridges with the Muslim world with the energy of a missionary.

That approach was on display during his 27-hour trip to Egypt, viewed as the leader in the majority Sunni Islamic world, and a nation that is making a serious — though controversial — effort to crack down on extremist-inspired violence.

So important to Francis, in fact, is the "personal encounter" with Muslims that the pontiff put his own safety at risk by going to Cairo, a trip that took place less than three weeks after 45 worshippers were killed in bomb attacks on two Egyptian churches.

The pope even shunned a bulletproof vehicle and when he arrived at a sports stadium for an open-air Mass he greeted the crowds from an open-topped golf buggy.

"Whereas previous popes — even in more secure places — have ridden in bulletproof vehicles, Francis showed his courage in Egypt, and his will to be close to the people, by this simple gesture," explained Gabriel Said Reynolds, a professor of Islamic studies at the University of Notre Dame.

Reynolds took part in a recent Vatican-Muslim forum at Cairo's Al-Azhar university, a major center of Sunni-Islamic learning with global influence and expertise in interpreting the Quran. The dialogue that Reynolds is part of only restarted under Francis — who was elected in 2013 — after relations had soured under Benedict.

Yet even as the current pope pushes for a personal encounter with Islam, his predecessor's legacy of engaging Islam via a theological challenge to extremist elements among Muslims continues to hold some sway.

Indeed, just as Francis was heading to Egypt a letter appeared from the retired pope to the president of Poland in which Benedict accused "radical Islam" of creating an "explosive situation in Europe."

Catholic defenders of Benedict's Regensburg address insist that he correctly addressed some uncomfortable truths within Islam and they point out that the speech led 138 Islamic scholars to write to Benedict in 2007, a letter that paved the way for a new Catholic-Muslim dialogue initiative.

Yet while it was Muslims who approached Benedict a decade ago, under Francis things are the other way round.

Francis' approach to Islam is characterized by a willingness to "cross over to the other side" — Egypt is the seventh Muslim majority country he has visited in his four years as pope. And a papal visit to Bangladesh, where almost 90 percent of the population are followers of Islam, is planned for later this year.

This has always been his style. When he was archbishop of Buenos Aires, Francis — then Cardinal Jorge Mario Bergoglio — became the first Catholic bishop to visit Argentina's Islamic Center, and the Jesuit pope has continued to focus on building personal connections with Muslims.

In Egypt, this was symbolized by his embrace of Sheikh Ahmed el-Tayeb, the grand imam of Al-Azhar mosque, following the pope's address to their peace conference.

It was a powerful image of Muslim and Christian fraternity that had echoes of St. Francis of Assisi's mission to Islamic leader Sultan Al-Kamil 800 years ago.

This personal approach has been bolstered by Francis' consistent refusal to link the Islamic faith per se to terrorism, and has made the Islamic world take notice.

It also meant that when Francis issued one of his strongest and most detailed condemnations of religious violence during his Al-Azhar address, his speech was welcomed and frequently interrupted with applause.

"He knows that the only effective way for his message of peace to touch the hearts of the larger global community is to speak together with leaders of other religious communities," Reynolds explained.

"He is counting on the prestige of Al-Azhar and its grand imam in particular, to join with him in broadcasting this message."

Al-Azhar, an influential 10th-century mosque and university, and its leaders are taking an active role to try and crack down on extremism in Islam. They are revered experts in interpretations of the Quran and that is key to countering the largely Sunni-inspired ideologues of the Islamic State, or ISIS, who use scripture to justify terrorist violence.

But those religious leaders also face an uphill task and a power struggle with the Egyptian government over who gets to reform what.

President Abdel-Fattah el-Sissi has made it his business to keep a lid on extremist violence since taking power in a 2013 coup that overthrew the country's first democratically elected president, Mohammed Morsi of the Muslim Brotherhood.

El-Sissi's administration has, for example, tightly controlled the content of Friday sermons delivered at the country's 100,000 mosques in an effort to curb growing fanaticism. It hasn't, however, stopped ISIS from picking off disaffected members of the Brotherhood. This puts the pope's attempts into perspective.

"It is not clear what kind of an impact a Catholic pope can have in reaching the hearts of Muslims who are attracted by extremist ideology, even if the pope is speaking with the grand imam of al-Azhar," Reynolds added.

What all this underscores is how intertwined religious problems are with the politics of Egypt, a phenomenon that is common across the Arab world.

That is also a special challenge to those in the secular West who think if religious faith was sidelined then the problems go away.

Yet it presents an opportunity to the pope and the Vatican as leaders of an ancient Western religious institution that is also experiencing major growth in the developing world — precisely where Islam is growing, often in competition, but sometimes in collaboration.

"Religion tends to be relegated to the private sphere, as if it were not an essential dimension of the human person and society," Francis said.

"At the same time, the religious and political spheres are confused and not properly distinguished," he warned. "Religion risks being absorbed into the administration of temporal affairs and tempted by the allure of worldly powers that in fact exploit it."

In this context, the pope urged Egyptian Christians to be a positive force within society; to be people of dialogue who are "sowers of hope" and able to forgive those who wrong them.

This is no easy task in a country where the ancient Christian communities suffer growing persecution and in some places are being driven out.

Nevertheless, Francis told them that "true faith" makes people "more merciful, more honest and more humane" and that the only fanaticism for a religious believer should be that of charity.

The increased vulnerability of Egypt's 9 million Christians, the vast majority of whom are Coptic Orthodox — there are only around 272,000 Coptic Catholics — could be bringing them closer together.

In Cairo, Francis reprised a favorite phrase about an "ecumenism of blood" between Catholic martyrs and Orthodox ones while signing an important joint declaration with the Coptic Orthodox pope, Tawadros II. In that accord, they recognized a common baptism among their believers.

Perhaps even more significant, however, was the historic moment when Francis, Tawadros and Patriarch Bartholomew of Constantinople, the leader of Eastern Orthodoxy, sat alongside each other during an ecumenical prayer service.

It is believed to be the first time these leaders of three ancient streams of Christianity have shared a platform, and it represented an important — if symbolic — united front in defense of their flocks.

In the end, however, Francis' short Egypt trip will primarily be remembered for his willingness to take risks in the cause of peace and his demonstration that the Catholic Church can work with Islamic leaders on combating religious extremism.

That the pontiff and the imams are on the same page can only be a good thing for peace, and a crucial step forward following the contested approach of Benedict XVI.

But whether the extremists will heed any counsel other than their own is the real question, and one that may not have an answer anytime soon.

Trust in God's compassion, tell him everything, pope says at Angelus