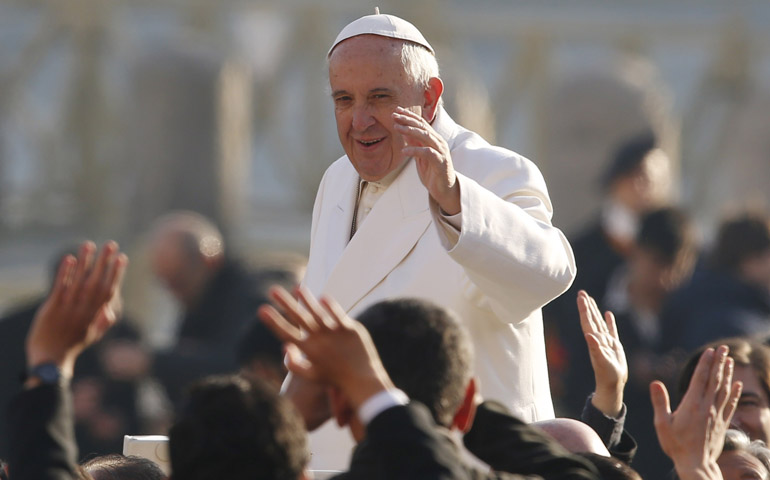 Pope Francis greets the crowd during his general audience in St. Peter's Square at the Vatican Dec. 16. (CNS/Paul Haring)

In the name of his ongoing Jubilee year of mercy, Pope Francis has strongly called upon global leaders to make what he has termed “courageous gestures of concern” for those left most in need by society -- especially prisoners, migrants, and the unemployed.

Among the pontiff’s requests, made Tuesday with the publication of his annual message for the upcoming World Day of Peace: Abolition of the death penalty, conditions for legal residency for migrants, jobs for the unemployed, access to medical care for all, and forgiveness of international debt burdens.

Francis makes the requests at the end of his 2016 message, titled “Overcome Indifference and Win Peace,” in a concluding section on “Peace in the sign of the Jubilee of Mercy.”

The pope first speaks of prisoners, saying that “in many cases practical measures are urgently needed to improve their living conditions, with particular concern for those detained while awaiting trial.”

“It must be kept in mind that penal sanctions have the aim of rehabilitation, while national laws should consider the possibility of other establishing penalties than incarceration,” he continues.

“In this context, I would like once more to appeal to governmental authorities to abolish the death penalty where it is still in force, and to consider the possibility of an amnesty,” he states.

The pope then speaks of migrants, asking that “legislation on migration be reviewed, so, while respecting reciprocal rights and responsibilities, it can reflect a readiness to welcome migrants and to facilitate their integration.”

“Special concern should be paid to the conditions for legal residency, since having to live clandestinely can lead to criminal behavior,” he states.

Francis also asks for “concrete gestures in favor of our brothers and sisters who suffer from the lack of labor, land and lodging.”

“I am thinking of the creation of dignified jobs to combat the social plague of unemployment, which affects many families and young people, with grave effects for society as a whole,” he states, adding that “special attention” should be given to women, “who unfortunately still encounter discrimination in the workplace.”

The pontiff then says he wants to express his hope “that effective steps will be taken to improve the living conditions of the sick by ensuring that all have access to medical treatment and pharmaceuticals essential for life.”

Francis ends the letter with a threefold appeal to world leaders, asking them to: “refrain from drawing other peoples into conflicts or wars;” “forgive or manage in a sustainable way the international debt of the poorer nations;” and, “adopt policies that respect the values of local populations.”

The World Day of Peace is celebrated by the church each Jan. 1, which is also the Catholic feast day of the Solemnity of Mary, Mother of God. Pope Paul VI first dedicated that feast to world peace in 1967, and each feast since 1968 has seen release of a papal message.

Francis’ message is particularly forceful in his requests upon world leaders, which he makes in the context of a special Jubilee year he opened for the Catholic church on Dec. 8 that is focused on highlighting the boundless nature of God’s mercy.

A Jubilee year is a special year called by the church to receive blessing and pardon from God and remission of sins. The mercy Jubilee will last until Nov. 20, 2016.

The pontiff focuses his 2016 World Day of Peace message on overcoming what he has commonly called a “globalization of indifference.” He opens the message with a stirring reinforcement of God’s care for humanity, stating: “God is not indifferent! God cares about mankind! God does not abandon us!”

Francis also reflects at length on the meaning and importance of mercy, stating simply: “Mercy is the heart of God.”

“It must also be the heart of the members of the one great family of his children: a heart which beats all the more strongly wherever human dignity -- as a reflection of the face of God in his creatures -- is in play,” he continues.

“Jesus tells us that love for others -- foreigners, the sick, prisoners, the homeless, even our enemies-- is the yardstick by which God will judge our actions,” he states. “Our eternal destiny depends on this.”

He says one particular form of indifference of our times is the ability of people to be incredibly informed through TV, newspapers, or social media about the problems of the world but to not get involved or engaged in the problems of the people around them.

“Theirs is the attitude of those who know, but keep their gaze, their thoughts and their actions focused on themselves,” he states, adding that our culture of over-information “can numb people’s sensibilities and to some degree downplay the gravity of the problems.”

Francis also cites from his recent encyclical letter on the environment, Laudato Si’, to say that indifference to environmental concerns “ends up creating new forms of poverty and new situations of injustice, often with dire consequences for security and peace.”

“How many wars have been fought, and how many will continue to be fought, over a shortage of goods or out of an insatiable thirst for natural resources?” he asks.

Calling for a conversion of hearts from indifference to mercy, the pontiff cites the biblical story of Cain’s killing of Abel to say that God is never indifferent to humanity.

“How sad!” the pope exhorts. “What a sorry tale of brothers, of families, of human beings! This was the first display of indifference between brothers.”

“God, however, is not indifferent,” he states. “Abel’s blood had immense value in his eyes, and he asked Cain to give an account of it. At the origin of the human race, God shows himself to be involved in man’s destiny.”

Francis then speaks of God’s intervention to free his people from Egypt and of Jesus’ incarnation as a human being.

“God has come down among us,” the pontiff says of Jesus. “He took flesh and showed his solidarity with humanity in all things but sin.”

“He was concerned not only for men and women, but also for the fish of the sea, the birds of the air, plants and trees, all things great and small,” states the pope. “He saw and embraced all of creation.”

“But he did more than just see; he touched people’s lives, he spoke to them, helped them and showed kindness to those in need,” he continues. “Not only this, but he felt strong emotions and he wept. And he worked to put an end to suffering, sorrow, misery and death.”

The World Day of Peace message is signed by Francis and dated on Dec. 8, the opening of the Jubilee year and the Catholic feast of the Immaculate Conception.